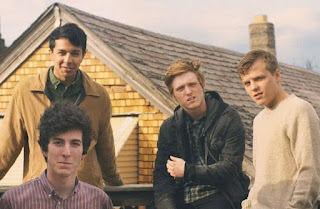 Their debut album "Stonerism" is out this December 11th via Autumn Tone Records.  The album was mixed and mastered by Cadien James of Twin Peaks.

'Brand New Way' is the tenth track on this eleven song album. With opening riffs reminiscent of The Kinks on Waterloo Sunset, the song soon emerges itself into a very different psychedelic atmospheric piece. Only one of two songs I have heard from the album, but based on that, the band sound like they have considerable depth and imagination. 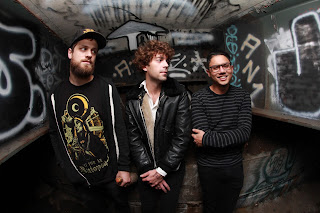 Bands Bio - Hailing from Boston, Dead Trains create a unique hybrid of old country blues and punk rock. Since their debut Break ‘Em On Down EP in 2013, they have toured extensively along the East Coast and embarked on two nationwide tours. With their most recent release, 32/20 EP, Dead Trains have garnered major local support from Vanyaland and Boston Metro and were recently named The Deli New England’s Artist of the Month.

With their frenetic, slide guitar driven mixture of blues and punk, Dead Trains want listeners to know that this is not simply blues rock. Inspired by the sounds and lyricism of traditional Delta Blues, County Road Bound tackles themes of displacement, self-deprecation, and fatalism. Even the album title derives from traditional blues repertoire. To be “county road bound” suggests that you’re bound to be sentenced to a road prison because of crimes you’ve committed or plan on committing.

County Road Bound utilises irregular chord progressions, swift tempo changes, and pulsing bass and guitar lines to create the menacing, hard to define sound that Dead Trains have become known for. The title track seamlessly brings all these elements together and even transitions into their interpretation of Johnny Winter’s “Mean Town Blues.” The record also includes an unrecognisable cover of Suicide’s 1977 “Rocket USA,” proving their ability to make anything their own. But that’s not all they do. Rounding out the album, “Fire Next Time” is the simple, yet lyrically dense track that brings listeners back to the basics – a guy with a guitar and a slide.

One of seven tracks, 'Country Road Bound/Mean Town Blues' typifies this release with it's gutsy punk edged honesty. When they talk of a mixture of punk and blues, they mean it, the songs mix both elements together giving a sound and energy that is enticing.