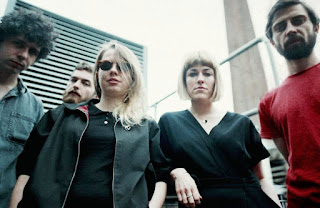 Background - Following the organic buzz that arose from “Way Of Sorrow”, the Altered Hours are set to make a further mark on the flourishing psych-rock scene with the direct, sultry follow-up “Silver Leather”.

The band, whose sound has been continually honed over the last few years, have been building a solid identity that will be truly apparent from their upcoming debut. Already a real prospect live, their shows are known for their intensity and the band's ability to envelope both themselves and the crowd in their sound – but where so many focus on the textures, The Altered Hours set themselves apart with as much a focus on the songs themselves. The group have toured Ireland, the UK and Europe and have won critical acclaim along the way.

The group have released another 7'' – Dig Early – on Irish label Art For Blind since and their full length, In Heat Not Sorry, will finally see the light of day this coming January (29th). Part of a burgeoning Irish scene that continues to spawn young and seemingly brilliant, vital bands, Altered Hours will take their place on a wider scale with this record. Melodic, abrasive, dual girl-boy vocals, a Sonic Youth and ‘White Heat’-era Velvets approach to atmospherics, guitar tone and crashing feedback, and the indefinable that is all of their own making - this band’s sounds are surely destined to travel.

Whereas 'Way Of Sorrow' for me, had a punk feel to it (a little like early Banshees material), 'Silver Leather' is definitely more psych-rock orientated. Slower, clearer, with each instrument and the vocals clearly defined, the band put a lot of work into their material, and it works, case in point being this taster for the new album.

Field Music - The Noisy Days Are Over (Single Version).

Background - Field Music recently announced its return with a new 14 track album Commontime, set to be released on February 5th, 2016 via Memphis Industries.

The first song to be taken from the album is 'The Noisy Days Are Over', an insistent, sax-punctuated groove and a conversation between two friends struggling to say farewell to the bad old boozy days, when they should "get to bed like everyone else" -- yesterday they shared the video for the track, directed by Andy Martin.

Over the past four years, North-East siblings Peter and David Brewis have threaded their way through one extra-curricular project after another but were inevitably drawn back to working together on their own songs. "As much fun as we might have had on our own or collaborating, we missed just spending time in the studio, the two of us, trying things out and playing together." explains David. The space that Field Music vacated in those four years still appears to be empty. No one else really does what Field Music do: the interweaving vocals, the rhythmic gear changes, the slightly off-chords, but with the sensibility that keeps them within touching distance of pop music. But with Commontime, Field Music show off their unashamed love of choruses in a way they've only hinted at before.

Written and recorded in spontaneous bursts over six months in their Wearside studio, Commontime is built around the brothers playing and singing together again, but also features a wider array of players, including original Field Music keyboardist Andrew Moore, Peter's wife Jennie Brewis and new member of the live band Liz Corney on vocals, plus a panoply of other players. "We wanted to embrace being a duo and, perversely, that made us feel more comfortable about all of those conspicuous cameos" reveals David.  Over the fourteen songs of Commontime, real life conversations are replayed, acquaintances come and go, hard won friendships are left to drift and diffuse snap shots of the everyday are pulled together into what must rank amongst Field Music's best works to date.

The new video is viewable on our BeeVids page. 'The Noisy Days Are Over' has been around for a little while, it's just steeped in class, and is massively catchy. In terms of building up anticipation for the new album, the video is a (highly enjoyable) reminder, to make a note of the release date, for this extremely talented band.