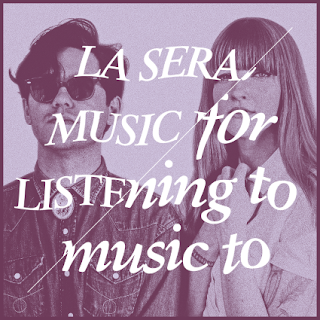 Background promo - The title of La Sera's fourth album says a lot by saying so precious little: Music For Listening to Music To. So, in other words, "music." After the punky heft and wildness of 2014's Hour of the Dawn, an LP that thrashed against expectation, Katy Goodman returns with a set of songs that double down on solid simplicity — the power of wry lyrics, glorious guitar, driving back beat, and the occasional pump organ groove. And as the record cover gives away, Goodman isn't alone. La Sera is a duo now — that's guitarist/co writer/new husband (!) Todd Wisenbaker standing up there. And Ryan Adams joins to produce the fruit of their union, La Sera's first live-recorded analog album, featuring 10 tunes about good love, bad love, dead men, and confused kids.

Music For Listening to Music Toopens on "High Notes," where rollicking guitar and punk drums chugga-chugga beneath Goodman's assured coo. Her lines deftly wrap the snark of Morrissey inside the sneer of Johnny Cash, and if you ask her what her favourite parts of the new album are, she'll tell you it's the scrappy stuff.

From the new La Sera record, produced by Ryan Adams 'High Notes' really is just part of the story (as is the above promo edited down considerably!). What the featured track does do, is to demonstrate what a class act La Sera are, and gives just a small flavour of a very good album. 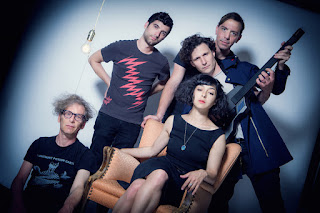 Foxtails Brigade - We Are Not Ourselves.

Background bio - Once you hear Laura Weinbach sing, you’ll never mistake her for anyone else. As the front woman of Bay Area indie-pop ensemble Foxtails Brigade, Weinbach breathes life into a character at once sweet and fearsome, angelic and menacing; the allusion of timidity while conjuring great power. Now, on Foxtails Brigade, the group’s third album, Weinbach ups the ante with a resounding roar, solidifying the ensemble’s lineup and distilling their dramatic arrangements into punchy pop songs that propel her and her band mates forward to soaring new heights.

While themes of defeat, alienation and nihilism pervade the album’s eleven tracks, they stand in stark contrast to a vibrant parade of rich string arrangements, warm bass lines and nuanced twists and turns. On lead single “We Are Not Ourselves,” the tension inherent in the song’s title is elevated by the tick-tock of a snare and kick, hair-rising strings and sharp guitar jabs that echo Spoon’s best. Later, the cheery horns and bird sounds on “None But the Lost” provide the perfect foil for Weinbach’s harsh narrative, and the synth-driven “No Fate” shows just how effortlessly Foxtails Brigade can sneak a glossy pop-rock tune into the mix.

The band just released the lead single, 'We Are Not Ourselves,' off their new, self-titled record that's due out April 8th on OIM Records. This is one of those songs, that does more than enough, to intrigue me into wanting to hear their forthcoming album. it's fresh, quirky, adventurous and extremely pleasing, and that's just the single.