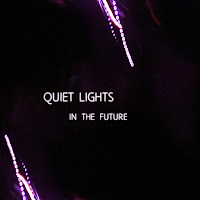 Quiet Lights - In The Future.

Background - A long time ago, Beehive Candy featured Quiet Lights. Their new record, In the Future, was out last  Friday, Jan 15th, and it reminded me of just how much I enjoyed their somewhat distant last release.

Recorded over two to three years, In The Future features nine songs and shows Quiet Lights heads down in sound-scapes and uplifting restraint. The band describe the making of this album as "two years of entropy, agony, and ecstasy (but never apathy) of weaving layers to get it completed". You can hear and buy more on Bandcamp (here).

The featured 'title' song from the album, is indicative of the superb atmospheric dream pop Quiet Lights produce with such mastery. It is to all intents artful music, however never pretentious, and just so good for your ears and mind and soul.

Introductory words from Merival - Lovers is a collection, my warm debut. The 5-song EP is shaped by relationships and reflection, finding beauty and transformation in heartache.

Since landing in Toronto in 2012, I have been active in the music community, contributing to projects and collaborating with musicians including Ryan Hemsworth (Secret Songs), Torquil Campbell (Stars), Darren Seltmann (The Avalanches), Swim Good (Bedroomer) and fronting my old band First Rate People.

All of the songs on Lovers were written before I was 20. I wrote 'Kicking You Out', the second single, when I was 17 - it's the oldest song on the EP - about someone I'd been in love with for 2 years already. I'd never lived with him so I took some artistic liberties there; the idea of kicking him out was more of a premonition I had, that I would carry him with me for years and years after the fact and would need to be continually kicking him out of my mind. So far it's held true.

Lovers was recorded with my friend Asher Gould-Murtagh and mastered by Glen Watkinson at Sheepdog Studios.

'Kicking You Out' is beautiful, honest and quite charming. Vocally it is quite stunning and the gentle guitar just adds the right amount of support. You can also check out the delightful first single 'A Better Deal' (here).