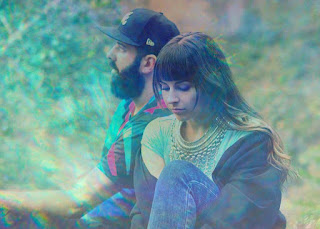 Promo words - Atlanta based duo CLAVVS have just released their stunning new single titled "Leviathan." Filled with stunning vocals from frontwoman Amber Renee, she is accompanied by the intricate instrumentation of Graham Marsh. Together the two bring to the table, an honest, heartfelt, and emotional brand of electro-laced-pop that brings their sound to life. "Leviathan" kicks off 2016, one to be a high-profile year for the group, as their charming, yet haunting sound lingers in your ears; drawing you back in every timeIf not for a chance meeting at a house party in Atlanta one summer night in 2013, Amber Renee might never have met Graham Marsh, and the pair might never have realized their shared love for hip hop and Radiohead. That same love would ultimately evolve into CLAVVS, a musical partnership fronted by Amber and produced by Graham, the four-time Grammy winner behind artists like Gnarls Barkley, Kid Cudi, and T.I.

Over two years later, their music has since been featured on Kings of A&R, Jam in the Van, Largehearted Boy, and Yaqui, among others, and on the air via Album88 and Anti-Robot Radio. CLAVVS will also be featured in the 2016 Atlanta episode of The Music Voyager, a PBS series following the lives of creatives in the city. CLAVVS' first single “Sit You Down” was picked up by Fresh Finds, a Spotify curated playlist boasting 40K+ followers. “Throats,” the follow-up release premiered by Press Play, garnered over ten-thousand plays in its first month.

After a case of mistaken identity, CLAVVS (formerly CLAWS) changed the spelling of their name to distinguish themselves from other groups with the same moniker. But really, it’s their music that sets them apart. If the vibe of their latest singles is any indication, the duo is departing from the mainly organic production of their first album and into a realm of dark, hypnotic alt-pop driven by spacey synths and anthemic drums. Given that half of CLAVVS is Graham Marsh, it makes sense that the duo is navigating more progressive waters. With Amber Renee’s sultry, at times eerie, vocals floating atop the organised chaos, CLAVVS has stumbled upon new terrain that just might catapult them into more mainstream success in 2016.

Definitely atmospheric, however also quite energised, 'Leviathan' is one of those songs, that appears to be going in one direction, then builds in another, with strong vocals and defined music. Can't help but liking this song. 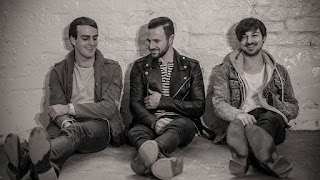 Crystal Cities - Talking To Myself.

Background promo - Crystal Cities, was born on a balmy January night in the garage of Geoff Rana’s house, in Sydney's Inner West. They were jamming an older original song, and by starting in a different key after a long session, it revealed a chilled, stripped back and eerily, ethereal version of the once energy driven track. This was the new sound that inspired Crystal Cities to become the other-worldly pop band they are today!

Lead singer, Geoff Rana, is a prolific songwriter and a respected part of the Nashville Songwriters association. Geoff was chosen to write with well respected writers at The Writers Den after being spotted performing at the famous 12th And Porter venue as part of the Next BIG Nashville Music Conference.

The band released their debut single “Cut Me Loose” in 2015 to great reviews. The single gained interest across the U.S gaining rotation at radio WEQX in NY, Modern Rock 98.7 in Carolina and 92.9 in California to name a few.

Crystal Cities began working on their follow up single with The A&R Department and Platinum Artist Development in late 2015. After defining their sound with the debut single “Cut Me Loose”, the band headed back into the studio in December 2015 choosing producer Sean Carey at Church Street Studios in Sydney to begin recording their follow up single “Talking To Myself.”

The band is currently writing material for an up coming EP due for release later in 2016.

'Talking To Myself' is a mixture of vocals over a jangle pop type background. Both elements are strengths with this band, the vocal clarity and range demands attention, whilst musically things are beautifully tight and so, so pleasing. 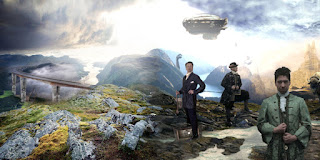 From the band - Jordon Zadorozny (Blinker The Star) and  Filippo Gaetani formed a transatlantic pop duo SheLoom back in 2008. I live in Tuscany, and Jordan, lives in Canada. During the winter of 2013, our friend and indie chamber pop pioneer Eric Matthews (Cardinal / Sub Pop) joined the band.

Our first single off our new sophomore "America On Fire" is out this week.

The new album boasts a filmic, art rock bedrock tempered with elements of new wave, 70's rock and orch-pop. Outside of a rushed 10-day recording session, the bulk of this album was recorded separately, with files being sent back and forth over the internet.

I have only heard the featured track and like what I hear. 'America On Fire' genuinely has that 'timeless' feel I associate with such well crafted music. Album keenly awaited. 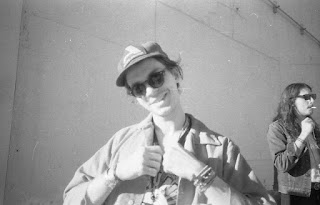 Promo words - Today we’re thrilled to introduce Andy Ferro to the galaxy, on behalf of Rough Beast Records. Ferro, who was born in London and raised between there and Nashville, will be releasing his debut full-length Muirhead through the label on February 26th. The first single “Sugar and Milk” is perfectly exemplary of the lo-fi psych folk vibe of the album, which was entirely self-recorded on a dusty old tape machine.

Muirhead is the first release outside of his band Ranch Ghost, and is the product of Ferro’s desire to become faster and more self-sufficient in the process of releasing his music to the public. After buying a tape machine and teaching himself how to use it, the songs of Muirhead quickly began to materialize. As the lead guitar player in Ranch Ghost, Ferro wanted his solo project to feel more stark and close to home, resulting in the stripped-down feel of his new album.

Having put all his efforts that he felt possible into this collection of songs, Ferro gave the tapes to Mitch Jones (Fly Golden Eagle, Thunderbitch, Majestico) a keyboard and sound-effects guru whose playing and atmospheric additions really helped him make it feel like it was finished. Muirhead is the final stage of an artist who has been a keystone in a band, but at the same time, felt he was ready to construct his own musical arch.

'Sugar and Milk' is reasonably indicative of the seven track album. It has a simple low-fi and folk feel, however clearly a considerable amount of love and labour has gone into this work. Very catchy.