Two Totally Different: Darla And The Blonde - Left With Pictures 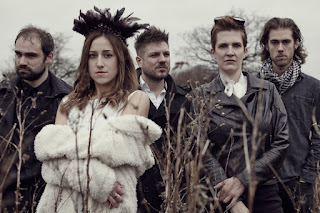 Darla And The Blonde - End of the Party.

Background promo - About ‘End Of The Party’ In the finest tradition of deathless rock’n’roll, ‘End Of The Party’ is an electrifying mix of the grit and the glitter, built on an infectious glam-rock groove interspersed with sparks of searing guitar. Atop this grungy, Ziggy-like bedrock, Jen Demaris and Nina Lovelace’s crystalline voices ring out a catchy and powerful melody, which, rather than being concerned with the closing stages of a heady night out, is in fact about Hong Kong’s Umbrella Revolution of 2014: “This Is The Time And These Are The Places/Where You Must Bend To Changing Faces”. With touches of The Runaways here, Patti Smith there, ‘End Of The Party’’s absorbing progression takes in a pristine solo by guitarist Rob McCabe before climaxing in a rush of vocal harmonies, a fitting final refrain of what is a gleeful testament to the scope of Darla And The Blonde’s ambition.

About Darla And The Blonde Encompassing the seductive glamour of goth, the catchy harmonics of pop, the experimentalism of prog and the narrative traditions of folk, Darla And The Blonde are a broad-based five-piece who craft their influences into a bold and distinctive brand of dramatic alt.rock. Formed in East London by chief songwriter Nina Lovelace (rhythm guitar and backing vocals), the band are completed by Jen Demaris (lead vocals), Rob McCabe (lead guitar), Craig Page (bass) and Tom Loffman (drums). While Darla And The Blonde’s sound is influenced by the likes of Nick Cave and PJ Harvey, and their live performances take cues from musical theatre, Lovelace’s lyrics are primarily inspired by the concerns and experiences of inspirational women, both real and fictional. Darla And The Blonde’s superb single, ‘End Of The Party’, released on 18 March, will shortly be followed by a five-track EP that turns its lyrical focus to subjects ranging from age and trans gender issues to the escapades of feminine espionage, all set to the band’s impassioned and inventive alt.rock sonics.

'End of the Party' is defined by powerful vocals and an equally powerful band. It's a mixture of potent alt. rock with a brooding semi Gothic feel, and enough originality still to make it's own mark. 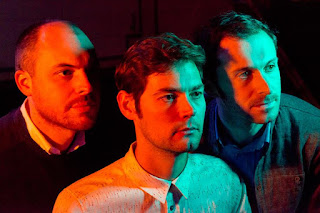 Background Bio - Left With Pictures are an orchestral pop ensemble from London. Formed in 2005, they started with three hard-up, classically trained musicians who forsook the orchestra pit for the sanctuary of their keyboard player’s loft. Armed with synths, guitars, strings, kazoos, found-sounds and a shoestring budget, they began with a series of self-releases and impromptu performances in theatres, bars and bedrooms.

In 2008 LWP signed to Organ Grinder Records – with whom they have released two albums, Beyond Our Means (2009) and 2011’s In Time, an album consisting of 12 songs which were released monthly and premiered by Gideon Coe on BBC 6 Music. Over 10 years the band has won critical praise, expanded their live sound, and steadily refined their craft of inventive pop music, where the acoustic and the electronic are intricately combined. Afterlife – their first release in five years – is the result of a band evolving, and pulling apart their sound in order to explore their own innate creativity, much of which can be attributed to the appointment of Richard Formby (Wild Beasts, Ghostpoet, Darkstar, Hood) as producer.

Formby acted as a sounding board and as a voice to challenge any comfort zones the band may slip back into after 10 years together, as Tom Walker explains: "Richard’s job as producer was often to gently unpick what we’d done and refocus it. He encouraged us to change arrangements in the studio –often stripping parts away and leaving a broader, more cinematic sound. Richard is a master of vintage equipment – modular synths, old organs, tape delays, etc. – and he always had ideas about which sounds to use and how to distort, bend and re-imagine the music we made."

In many ways it’s the sound of a band reborn, which is fitting when considering their subject matter. Much of what appears on Afterlife very frankly concerns endings, death and renewal – themes which evolved over the course of the writing and recording process. Bloody Mess doesn’t mince its words with the line “I don’t know what my body will to do me today / I’m scared to go to sleep tonight.” before the album’s lead track Terra Firma (a song very plainly about dying) climaxes in a kind of folktronic, symphonic soup, bolstered by gently swelling strings, ghostly church-pew background vocals and a gorgeous looped synth motif, all preceded by the contemplative lyric “It’s easy to go on without a life you know nothing about, when you spend your days at the water’s edge.”

Left With Pictures are Tom Walker, Stuart Barter and Toby Knowles. They are joined live by Alex Gold on percussion and Mike Cranny on bass.

'Terra Firma' is the 'icing on the cake' for me this week. What an incredible song! On the basis of this one track, my personal music collection is set to expand with their back catalogue. Just wonderful.