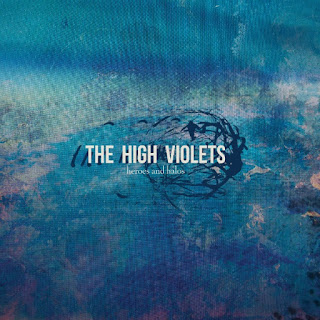 Heroes and Halos opens with two sharp hits on the snare, like two quick blows to the head, and then you’re inside and it’s happening all around you. ‘How I Love (Everything About You)’ stops you in your tracks. The High Violets make you put down that chocolate chip muffin and listen.

These dream pop vets sound like a delirious mix of Lush and Slowdive, and their fifth album finds them looking to the skies, a cathedral of colour, a stadium of sound. Listen to the way the chorus in ‘Long Last Night’ keeps climbing and climbing until your agoraphobia kicks in and you have to grab onto something to keep from falling out of your chair. Then there’s the sinister groove of ‘Longitude,’ the majestic bliss of ‘Ease On,’ one great song after another, all awash in hooks that swoon and dive.

The album ends with the sparse burned-out waltz of ‘Hearts In Our Throats.’ Kaitlyn ni Donovan’s vocals accompanied by a hollow drum machine—it sounds like the sun coming up after a night of sensory overload, when all you want to do is sleep but your brain won’t stop spinning and so there’s nothing to do but look out the window and contemplate the future, your breath forming patterns against the glass, as another morning arrives.

They’re from Portland, Oregon. They’ve been doing this for years. They know where all your buttons are and exactly how to push them. Like an open-mouth kiss, an unexpected present from a secret admirer, Heroes and Halos makes your ears ring with joy and your heart thump with wonder. It’s the greatest moment in a career of great moments. It’s The High Violets. It’s happening.

The featured track 'Bells' is the fifth of ten tracks on the album 'Heroes and Halos'. In fairness the song descriptions that are in the above promo are pretty much on the ball. 'Bells' gives you some insight into the album, it's very well crafted dream pop that dips towards shoegaze on some songs, overall it's a highly likeable album from a band that clearly know what they are all about. 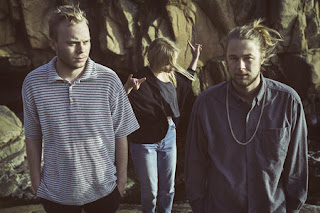 Postiljonen - How Can Our Love Be Blind.

Background promo - Following the success of their debut album Skyer, Postiljonen escaped to the valleys of Dalarna in rural Sweden. Over the course of a year the band spent one week a month in a small house, far away from everything, where they focused on what they loved. What happened there was Reverie.

The border-crossing dream pop trio Postiljonen, with members from Norway and Sweden, have established themselves as a force to be reckoned with. Mia Brox’s soaring vocals and the deft production of Daniel Sjörs and Joel Nyström Holm combine to create music full of heartache and nostalgia. Inspired by grainy old black-and-white films and the sleepless nights of summertime, Postiljonen’s music is a manifestation of their daydreams coming to life.

In 2013 the band released their debut album Skyer. Praised by critics both at home and internationally, it was picked out as one of Gorilla vs. Bear's best albums of 2013 and was also nominated for Pop Album of the Year at the Swedish P3 Guld Awards. After songs from Skyer were used in the HBO's ’Looking’ and the Fox series ’The Following’, the band were invited by respected music supervisor Gary Calamar (Six Feet Under, House, True Blood, Dexter etc) to perform at the prestigious Mimosa Sessions in Los Angeles. Expanding to a five-piece on the live stage, the band recently sold out their third consecutive date in London, have completed three successful tours of Asia and are regulars on the Scandinavian summer festival circuit  - winning over new fans at every turn.

During the early summer of 2015 Postiljonen released a first taste from the follow-up to their acclaimed debut album - the painfully beautiful ‘Wait’. Inspired by Californian winds, Chinese gardens, late Lost in Translation nights in Tokyo; and of course their part-time life in the woods of Dalarna, Postiljonen continue their experiments with sweet eighties references and dreamy sounds. ‘Wait’ was followed by the singles ’GO!’ and ’The Open Road’, which Simon Raymonde (Bella Union / Cocteau Twins) named as his favourite song of 2015.

Reverie is due on February 19 via Best Fit Recordings. A perfect soundtrack to hazy sunny days and starry nights.The band will be playing a headline London show and The Great Escape in Brighton, UK this May.

May 18 - The Shacklewell Arms, London
May 19 - The Great Escape, Brighton.

'How Can Our Love Be Blind' has a really lush feel to it, right from the very start. Vocally it's beautiful and the melody and music just add to what is a really pleasing song. It does in part remind me of the Cocteau Twins, however see that as a massive compliment on my part, considering how defensive I am of said band.