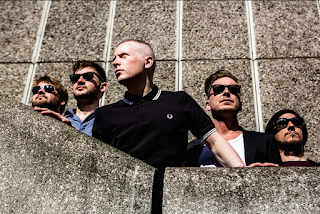 Background promo - We live in a world that is rapidly changing around and within us. Each day is a time capsule: a snapshot of who and where we are at that precise moment. Perspective is key, but by nature human consciousness isn’t built to process experiences in such a manner. People can struggle to get a helicopter view when they’re stuck in the eye of the storm that is life. It’s a concept which London noise merchants Suzerain have been exploring with second album 'Identity' – their very own dystopian nightmare born from the winds of change.

“We made this album across two years,” reveals singer Thomas Pether. “So it took a while to break into something we wanted it to be. Identity is something that is difficult to grasp on a day-to-day basis, it can change but isn’t always obvious. For us, this album feels like our identity at the moment.”

“We wanted to strip away as much as possible,” continues guitarist Rich Summer. “It sounds like a cliché but the more we removed, the more it sounded like us. We have a tendency to try everything we can and see what sticks, but this time once we found the heart of the music, we stripped everything down to that one little nugget that was the identity of the track, in a way.”

Enlisting the talents of respected producer Steve Lyon (Depeche Mode, The Cure, Siouxsie Sioux), the electro rock outfit strived to create something truly exciting, something brand new, something so very now that its process pushed their artistic vision to its very limits. As the pieces slowly fitted into place, so did the understanding that identity is the invisible carpet beneath our feet: a journey of self-discovery, and how the results of such naked introspection place us in equilibrium with the other forces of life.

“It’s not a concept album by any stretch,” says Thomas. “But it certainly does have elements of that. Our track 'I Know You So Well' came from how we can be seen through our digital footprint in the world, and 'Hide Yourself' is about opening up to other people by not hiding yourself, by just being you. Which to be honest is something we all want to do! So there were many things that crossed over in actually defining ourselves on this record.”

“We recorded so many songs that didn’t make the album,” continues Rich. “We decided that if anything sounded like another band could have done it, we didn’t want to include it. The music had to be something that could only be done by us. And embracing that side of us was both a blessing and a curse! But the result is that anyone listening to this record would have to grab a whole group of genres to figure out where we belong.”

Suzerain release their new album 'Identity' on May 27th. The featured song 'Always' gives a good indication of the brooding sound the band create. They are adventurous and the album does not sit comfortably in any particular genre. As a result we are treated to a mixture of indie rock songs, instrumental tracks, and softer imaginative pieces. It's hard to think of any specific band to reference them against, as they test out so many different ideas. This for me is one really fine album, the band are extremely capable, vocals are seemingly customised to each song, and we have a group of people who are not trying to follow a specific format that stifles their imagination.