Background bio - The Lost Poets - a mysterious dark impact from Sweden. Their faces are unknown and covered by a tar like substance. Wearing top hats and suits. Even though strange and dark, the music is full of beautiful melodies, positive elements and unique vocals.

The Lost Poets originates from Stockholm, Sweden. Their only release is an EP from 2014 "Insubordia", and the single "Mouth". Both received raving reviews internationally and in a very short time they have become hugely sought after.They are to be included in Dolph Lundgrens forthcoming feature film "Without YouI'm Nothing" and they opened for "Volto" (Tool drummer Danny Carey's band) at the infamous Viper Room on Sunset Boulevard merely weeks after arriving to Los Angeles. The Lost Poets are also currently working on the short film "Tales from Insubordia" and the children's book (!) "The Lost Poets".

The Lost Poets are a two-man extravaganza who brings the listener to another world. Through their mysterious appearances they express all emotions between everything and nothing. Truly beautiful, gritty raw and immensely powerful.

The ten track album has been out for a couple of months, but only came my way this week and is to good to pass by on. With a distinct & powerful earthy rock sound and a flare for creative songs, The Lost Poets are one potent band. Shades of early Pearl Jam through to even David Bowie, however that said they are more than capable of original pieces. Like the featured track, then you will love the album. 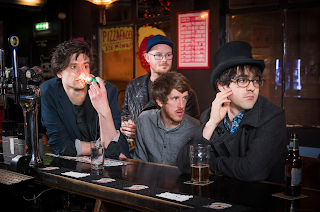 Background promo - A chance encounter at a Smiths tribute gig in early 2015 led to the formation of Brighton's This Party, a band that fuse sharp bass lines with infectious melodic hooks. Charismatic front man Matt is as well known for his energetic on-stage performances as he is for his strong vocals.

New single 'Taste' is two and half minutes of guitar driven indie rock. A clear statement of intent from a band that have very quickly established themselves as one of the UK's most exciting prospects. The single is the first release to come from the band's own record label Moscow Lets Go.

'Taste' is a two and a half minute blast, of classic British indie rock. Musically it's as tight as anything and the highly charged vocals add to this mini feast, of guitar driven rock.