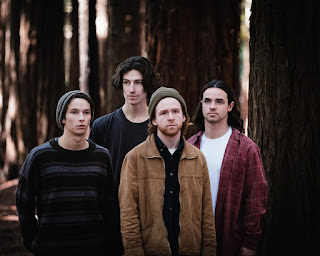 Background promo - Four-piece indie rock outfit Elk + Mammoth are stoked to announce the release of their debut EP, Culprit, with the single “Shiver” (recorded and produced by James Clark) out now.

Described as like a funky Lynchian dream, Culprit combines sinister staccato vocals and guitar riffs that could have been lifted straight out of the original Twin Peaks soundtrack. The result is both playful and unsettling, but be warned, the groove is infectious and side-effects may include drinking coffee black as midnight on a moonless night.

Since forming in 2014, they have established a herd of followers, performing their signature blend of unpredictable humour, unusual subject matter, and mid-set-on-stage outfit changes at venues all over Melbourne. They have played with artists such as The Pierce Brothers, Slim Jefferies, and Pockets, and gained traction with the release of their single “Fabric”, in 2015.‘Culprit’ EP will be released 3rd of June 2016 and features the single ‘Shiver’.

'Shiver' is one of four songs and the single from soon to be released EP 'Culprit'. What is particularly striking about the release is the bands distinctive sound being taken in a variety of directions. The melody is always there and they are happy to slow things down on a couple of the songs. It's a fine collection that displays musical maturity and creativity. 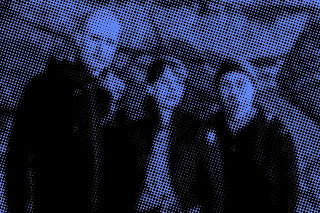 Silent Wave first began as a collaboration between artist Tildeh Hjelm and producer Hans Olsson Brookes. In 2013, Hjelm  approached Brookes with a pair of tracks intended for her solo-project to employ his production expertise. Their straightforward studio sessions began to evolve into something more kinetic. Inspired by the creative energy, Brooke suggested they turn the songs into a new project entirely and so Silent Wave was born.

From its genesis, Silent Wave’s power has been generated by the members’ eclectic backgrounds. An accomplished visual artist and film student, Hjelm not only writes most of the lyrics and melodies but also produces the project’s music videos. Brookes boasts an impressive resume for his work as a producer, engineer and multi-instrumentalist having mixed intentionally renowned Swedish artists like I Break Horses, José González and Junip.

The same can be said of Hjelm and Brookes’ converging musical influences. Hjelm kneels at the alter of RnB and Hip Hip set while Brookes leans more towards electronic-minded artists like Depeche Mode, Nine Inch Nails, Kraftwerk and The Cure.

Silent Wave released its debut single “Dream On, Dream On” along with b-side track “Only Love, Nothing More” in November of 2014. The duo followed the tracks with accompanying music videos produced by Hjelm. During the spring of 2015, Silent Wave added member Martin Öhman to the mix, a trained jazz drummer who brings an organic and acoustic, percussive human groove to the electronic beats.

'War' is indeed something of an anthemic piece, but definitely not a wall of sound. It's musically precise allowing space for the melody and instruments to stand out, along with the ideally suited vocals. 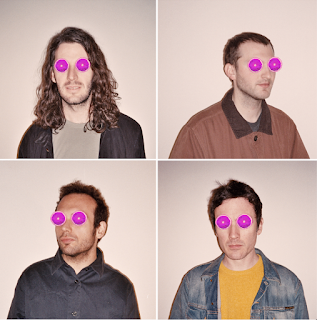 Background promo - Cairobi have announced their new single "Lupo," which will be available on July 1, and debut self-titled album Cairobi which will be released on September 16 through Week of Wonders. They have also announced a headline show at London's Birthdays on July 25.

Cairobi are a headily eclectic globe-crossing four piece of Giorgio Poti (vocals,guitars), Alessandro Marrosu (bass), Salvador Garza (keys) and Aurelien Bernard(drums). Their psych-pop, world music bordering sound reflects their various backgrounds from Italy and Mexico via France, and has received support from the likes of 6Music and Huw Stephens at Radio1. "Lupo" follows the band's 2014 Distant Fire EP and the single "Gristly Words," which is taken from their forthcoming debut record along with EP track Zoraide. Lupo is a hypnotically lush yet despondently exultant track featuring exotic grooves and synth-dappled psychedelic haziness and can be listened to here "Lupo."

Their debut self-produced album was written in Berlin and, fittingly with their diverse nationalities, was recorded between Berlin, London, Rome and New York. Music and this resulting album was Giorgio's means of finding his way through health problems, as after relocating to Berlin, he started to suffer frequent, violent migraines that would incapacitate him for an average of twelve days a month.

"I could either stay still, in silence, eyes shut, or take the medication and hope it worked so I could move on with my day," he recalls. "Even when the medicine worked, it would make me extremely sleepy, so some of the music and lyrics on this record were written in a state of drowsiness. That part wasn't particularly fun, but maybe it helped me get rid of some filters. Luckily, the headaches stopped after about a year." The finished record has an inventive hazy psychedelic sound with gorgeous pop-song structures and experimental arrangements, yet there is also an intriguing,melodious melancholy across the 11-tracks.

Following live dates last year, the band are already confirmed for two UK headline shows in July along with performances at summer festivals. Full lives dates announced so far are as follows:

If it's melody and hooks you want 'Lupo' has them in bucket loads. A rich musical texture under scores the dreamy vocals, on what is a highly likeable, play it again type song.