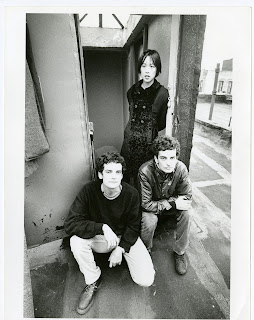 Blonde Redhead - This Is The Number Of Times I Said I Will But Didn't (4 Track Demo).

Background - Blonde Redhead has always produced at a furious rate, and the early years of the band were some of their most fruitful, with two excellent albums on Steve Shelley's wonderful but short-lived label imprint Smells Like Records, as well as a handful of stand-alone singles which all contained album-worthy tracks. Numero Group has lovingly compiled this release to document this period in the band's history - these singles are all long out of print and the albums are being made available on vinyl for the first time ever (having originally been issued in that weird period around 1995 where some labels were CD-only).

Featured song 'This Is The Number Of Times I Said I Will But Didn't' is the second track from the forthcoming release we have featured you can find our June feature (here). Having had a chance to listen to the whole collection now, I am reminded just how good the band were at that time. Beyond the original album re-issues we have something of an eclectic assortment of songs. There are a couple of 4 track demos plus the featured song, KCRW session material, 7 inch single releases, an outtake and other rarities. This is all fascinating and makes an excellent account of the period, alongside the two original album releases. Genre wise, its a mixture of indie rock, post punk, and just plain out there alternative rock songs. This was for many of us, our introduction to the band some twenty years ago, somehow I envy those who may hear their material for the first time through this release. It's still as vibrant, passionate and natural, enjoy!