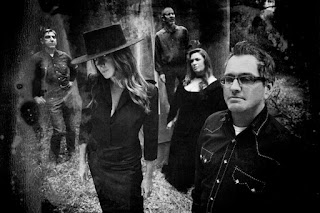 Background - Fueled by a sordid real-life backdrop of good old fashioned suicides, murders, and alcoholic depravity followed by church on Sunday, Elouise is an eccentric collaboration of Los Angeles-based musicians who came together to create an ominous, raw and cinematic genre of music they identify as Blackgrass.

It is the sound of sin and salvation mixed in a dark cocktail with a taste of Bluegrass, a black symphonic sound and weary emotional vocals that tell original tales of struggle and re-imagine songs from our collective Americana consciousness.

Elouise is back with their menacing Blackgrass rendition of the Holiday classic “Silent Night” and are offering a free download for the month of December. Website here.

Move aside seasonal slush, no room for sentimental songs here today. This is how you do 'Silent Night', followed by a large measure of Bourbon and ice (I'm guessing that's an acceptable brew for alcoholic depravity)... 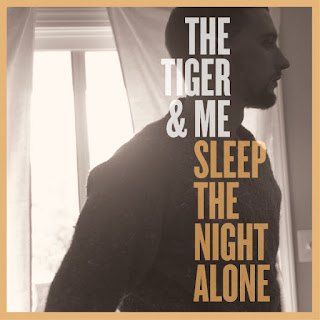 The Tiger & Me - Sleep The Night Alone.

Background - In anticipation of their forthcoming third album, Melbourne quartet The Tiger & Me have announced the release of their new single ‘Sleep The Night Alone’ and its accompanying clip.

Intrepid by nature, with three lead singers and a multitude of instruments, The Tiger & Me is a sound that refuses to sit still. Produced by ARIA-nominated Steven Schram (San Cisco, The Cat Empire), ‘Sleep The Night Alone’ is a dance pop track about the corner of the life you abandoned, and how you got there in the first place.

‘Sleep The Night Alone’ is out through ABC Music imprint “Four | Four” (Tim Rogers, Melbourne Ska Orchestra), who also guided the release of the band’s second full-length album, The Drifter’s Dawn, which took out album of the week on PBS and racked up airplay across JJJ, 4ZZZ, Triple R, Edge Radio & RTRFM.

To accompany ‘Sleep The Night Alone’, The Tiger & Me have released a clip for the track as well as b-side ‘When All The World Went Dark’, originally an acoustic folk song written by Tobias Selkirk (vocals & guitars) on a ukulele while travelling through South America. Website here.

'Sleep The Night Alone' mixes really fine vocals and harmonies with a melodic and slightly understated soundtrack, resulting in a likable and danceable indie pop song. 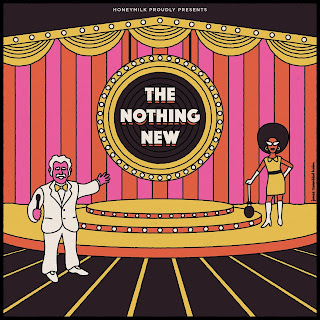 Honeymilk - The Nothing New.

Background - Sweden's Honeymilk has been around for 4 years but just recently scaled down to a duo (from a previous four piece). We all have our ups and downs and the story of how the two main figures Marcus Admund and Nikki Nyberg hold on to each other since meeting in a scout cabin back in 2009 is one full of fighting spirit and love for the music they're creating.

At the moment they're in studio working on the follow up to critically acclaimed 2013 debut "Lean on The Sun" (and 2014's "Sanguine Skies EP"). Their shoegazy Britpop has gained supporters all over the world - notable ones are KEXP, Q Magazine, Jajaja Music and Music Week.

In June 2016 their latest effort "Time Will Kill You" soon turned into their most succesful single to this date - with playlists adds and media ravings flowing in to the HQ. The band play a sold out show at The Finsbury in London and the single soon hit 140k+ streams on Spotify.

'The Nothing New' could be about finding yourself in an age and situation where the demands that hunts you are increasing; the same that it takes more alcohol to get drunk, it takes greater and greater everyday explosions for the static line that life has gradually turned into to be moved. It could also be a pretentious and unclear salute to both Samuel Beckett's book Murphy or Spacemen 3. Or it could be a very good pop song that means nothing.

With a slick beat and distinctive vocals 'The Nothing New' builds into a fine and refreshing indie piece with enough hooks to guarantee another play for my ears. 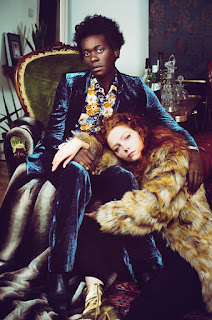 Background - Gutxi Bibang is an unlikely candidate to carry the rock n’ roll torch, a second-generation African from the Basque county of Spain. On the heels of his debut single, Gutxi shares an incredibly powerful video for "System Of A Gun" after his debut U.S. performance last night at Communion NYC.

His family emigrated to the tiny coast town of Algorta outside of Bilbao, but native son Gutxi Bibang has more in common with larger-than-life musical icons than he does his Basque countrymen. Even his unique moniker speaks of his cultural clash heritage – Gutxi, a common nickname in his Basque homeland, and Bibang, from his roots in Africa.

With his distinctive manner and impeccable style, Gutxi Bibang exudes charisma - not just a reminder of when rock was a socio-cultural force for change in the ‘60s and ‘70s, but a glimpse into the music’s global future.

It's strange how sometimes a music video can add clarity to a song. 'System of a Gun' came my way a couple of weeks back in audio form, and for whatever reason it didn't register with me. Watching the 'live' video made things click, the band are feisty, Gutxi is a natural rock'n'roller, and the songs home is in a hot and packed venue, where the music plays all night long, simple really! 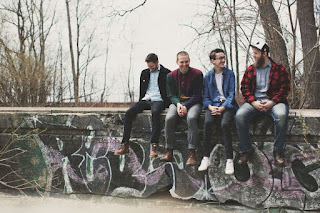 Eleven North - Words From The Wise.

Background from the band - Words From the Wise is about the roads that life sets before us, and the choices we make to define ourselves.

As a band we are currently wrapping things up in studio and we are excited to be releasing a full length album in the new year. The single, “Words From The Wise” with the same title was an easy choice for the band with its big sound, explosive energy and a message that reminds us to be more selfless in our choices.

We've been working on creating an unparallelled and highly entertaining live show that we can share with our listeners. This year we have had the privilege of sharing the stage with artists such as: Juno winner Dear Rouge, Australia's The Lazy’s, West Coast Music winner Michael Bernard Fitzgerald, East Coast Music winner Andy Brown, and Edge Next Big Thing winner Ivory Hours.

Overall we have tallied up over one-hundred shows this year from coast to coast and we don't plan on stopping anytime soon! Website here and Facebook here.

'Words From The Wise' is an energised alt rock song (or maybe indie, or whatever, it's hard to pin down). Vocals add depth and the musicianship is tight and funky. Forthcoming album most definitely on my radar now!