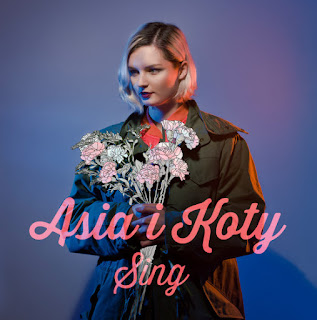 Asia i Koty - I'm Gonna Use My Claws.

Background - The second album entitled “Sing” was released on 2 April 2016 on Nasiono Records label that Bielawska has been associated with from the very beginning of her career. As the title indicates, this album is about singing and vocals play a major role in it. Asia i Koty intertwines various musical inspirations here, among which one can sense the spirit of Angel Olsen, Cat Power or Julianna Barwick. The music is based on the sound of an electric guitar but Joanna Bielawska also reaches for an acoustic guitar, piano, loops her instruments or enhances them with a subtle beat. The artist states that this album is about the importance of singing songs in her life and about a constant struggle with herself, about the barriers we create for ourselves:

“Sing” is a chronicle of my battle with depression, pathologically low self-esteem and persisting lack of faith in myself. The songs were written without any prior planning – they are the result of spontaneous home recording sessions which occurred when I had a chance to turn my self-loathing into creative energy. The song “Sing” is about a constant state of self-doubt which paralyses and prevents from doing anything most of the time. “Miracle I Hate” is presenting my fascination with how the state of depression can totally distort the perception of oneself. Because how is it possible to relish the world that surrounds you and at the same time thoroughly hate yourself and your life which after all is a miracle too? “In the Morning” is about the strokes of hope and life energy – and how quickly they tend to slip through your fingers. “All I Ask Take My Hand” is about the things a depressed person expects from their loved ones. Depression destroys not only the person suffering from it but also the loved ones who tend to take responsibility for the illness. Even though they are not to blame in the slightest. In most of the cases, depression has nothing to do with whatever is happening around us. It comes and goes without any notice. In a slip of a second it can take the whole meaning of life away, but not forever. That’s why sometimes it’s enough just to hold each other’s hands and to wait for the meaning to come back. Facebook here.

During December we receive a good number of messages from various agencies and record labels reminding us of their releases for the year. This is where we come across the odd gem that has slipped past us, and 'I'm Gonna Use My Claws' by Asia i Koty, is one such example. This is a gorgeous song from the equally delightful album 'Sing'. 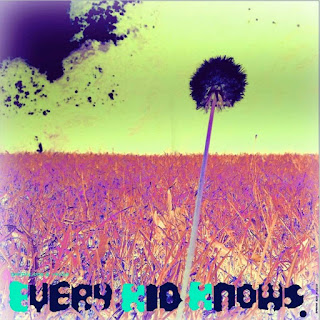 Background - Every Kid Knows are a set of musicians led by band leader JT Johnstone. From the heaven-sent sounds of psychedelia reminiscent of peak Lennon with a twist of Beck you will find a) side ‘Dandelions & Valium’ released at the start of 2017 bringing a message of hope and peace after what was a tumultuous 2016. b) side ‘Runway Song’ is one of those classic B cuts that offer humorous insight into a band of pals bantering around in the studio before breaking into a most delicate lilting lullaby that sustains its title, as you envision the plane you’re on gathering speed along the runway as you peer out the window, contemplative as you take to the sky in pursuit of some newfoundland.

Both tracks take on the twisted acoustics and alien electronics to infiltrate their heady 70s tinged mix, courtesy of classic Roland TB 303s and Korg synths and it’s plain to see some key influences for this record along the totem pole of John Lennon Plastic Ono, Ween, A Guy Called Gerald, New Order/Electronic and John Denver.

Every Kid Knows recently soft launched their debut album ‘Defenders Of The Nish’ on Spotify/iTunes etc. Lead singer Johnstone describes the LP as, “the ‘Bleach’ to Nirvana’s ‘Nevermind’ which is soon to be recorded in 2017 at Sawmills in Cornwall.” This comes across either as the ramblings of an egomaniacal cult curator drawn from the mould of Anton Newsome (Brian Jonestown Massacre) and Ian Brown (Stone Roses) or maybe even the zeitgeist of Kanye West. Arrogant and cocksure or just knowingly brilliant? Time will tell.  Website here and Facebook here.

'Dandelions & Valium' has more than a little psychedelic flavour to it, and the above mentioned influences are clearly there. That said' it's a fine, peaceful and dreamy song, and there is still plenty of room for songs of this calibre. 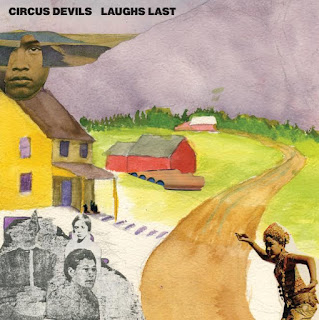 Circus Devils - Do The Nixon.

Background - Robert Pollard’s freak-rock trio Circus Devils says farewell with a pair of simultaneous releases for 2017. First is their 14th and final album Laughs Last, along with a best-of, double LP collection titled Laughs Best: The Kids Eat It Up (with DVD included).

On Laughs Last, Pollard and the Tobias brothers take a breathless romp through multiple styles, starting off with the brash hotdogger, ‘Get Out Of My Way When I’m In Town.’  Along the way we’re treated to the R.E.M. inflected ‘I Do the Nixon,’ the organ-fuzz stomper ‘Teenage Rooster,’ and the defiantly conventional ‘Crucified by The British Press.’   Full of high humor and low drama, Laughs Last is the bold exclamation point at the end of Circus Devils’ 16-year run.

Laughs Best (The Kids Eat it Up) – a collection of 30 speedy deliveries from rock and roll’s Twilight Zone – will leave you exhausted, satisfied, and ready for another spin.  Circus Devils’ entire mind-bending catalogue is represented here, including three songs from the brand new album Laughs Last.  While there is an emphasis on friendlier numbers, there is still plenty of the trio’s prog psychedelia on display. Release date for both albums: February 24, 2017.

'Do The Nixon' gives just a little insight into the final Circus Devils album due in February 2017. It's one of seventeen tracks where keeping things under three minutes and two if possible is the norm, and yet each track is packed with enough to keep the listener engaged. A best of album will also be released on the same date. So another band says enough! and as we have noted here already this year, going out on a high, seems the best way to wrap things up, something I feel Robert Pollard's trio have done with ease.