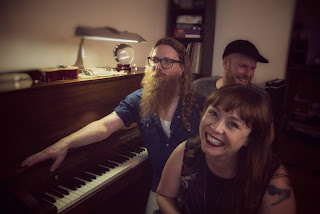 Background - Nobody ever really quits music. Not if they ever really loved it. One can try, but it always creeps back, until one day the air is once again being caused to vibrate in the most necessary to actualize being. It is how it should be.

Several years ago, Kathryn Musilek, frontman for Nevada Nevada, was a fixture in the vibrant and close-knit Iowa City, Iowa music scene, playing in numerous bands and just being generally omnipresent therein. In some way, this was the natural result of a life long love and study of music, having learned several instruments. A significant other used Kathryn as an entry point into this world, and once on the inside, spread their lovin' all over, with the knowledge of everyone in town--everyone, that is, but Kathryn.

This betrayal hurt so bad, it required that Iowa City be left behind in favor of Brooklyn and the creation of music be left behind in favor publicizing the same. It was a sort of "I need to be a new me" sort of deal. As we all know, though, a creator of things as gifted as Kathryn cannot suppress the urge to make things for long. And so there was born Nevada Nevada.

Nevada Nevada is a rock 'n' roll band from Brooklyn with more than a hint of its midwestern roots. It is part Wilco, part Guns 'n' Roses. There is americana and folk, but there is even more rock 'n' roll. Facebook here.

Distinct and melodic vocals drive '900 Days' forward, accompanied by a powerful musical soundtrack that develops into something quite expansive and somehow manages to grows even further as the song unfolds. 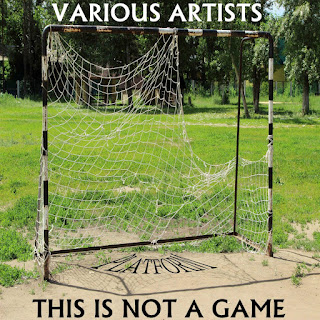 Rayne - Chemicals.
Gregory Clark - The Home Song.
(From the Various Artist Compilation 'This Is Not A Game', released 9/12/16).

Background - Platform Records and Platform Songs (Publishing) will celebrate it's tenth anniversary in 2017.

To mark our first decade, rather than just 'looking back', Platform is releasing a 15-track various artists compilation, including bands, singers and songs very recently signed to our business. The album contains just under an hour of indie-pop and indie-rock music. Platform Records here.

Rayne's 'Chemicals' and Gregory Clark's 'The Home Song' are just a small taste of the quality and variety to be found on the new compilation album from Platform Records. If you have a liking for indie pop and rock, then this really is a fine collection of artists and songs, that are well worth getting to know. 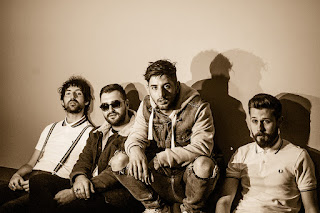 Background - Hailing from the great South Australian state that brought you two giant balls, Farmer’s Union iced coffee and Cooper’s Pale Ale come brit pop band The Byzantines. The boys are excited to announce their new EP, set to release via Marshmallow Pavement Records on February 17th, 2017. The band are also announcing an east coast Australian tour during February and March in support of the new EP. The tour kicks off at The Karova Club in Ballarat on Friday Feb 24 with label-mates The Montreals, and Melbourne Garage-Rock darlings BATZ. They’ll make their way up the coast on a 9-date tour, hitting Melbourne, Canberra, Sydney, Brisbane and other cities along the way.

There’s nothing pale about these Adelaide lads and best mates; vocalist Michael Pietrafesa, guitarist David Zammit, Jose Moucho on bass and Johnny Zervas on drums. The Byzantines have incorporated a varied mesh of sounds and layers, all the while feeling organic and staying true to the British sound that bands like The Stone Roses and Primal Scream made famous. 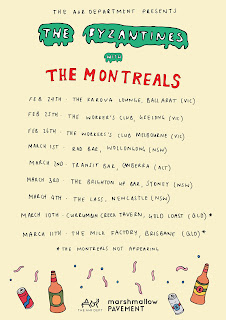 Using the opportunity to promote their debut EP and supported by the Brit music icons such as Fred Perry Subculture and Liam Gallagher’s clothing label Pretty Green, The Byzantines embarked on a European/ UK trip in 2014. Coming off the success of that international tour, the guys were invited by Rolling Stone Magazine to play a sold out Workers Club show in Melbourne for their Live Lodge event supporting The Delta Riggs.  After copping some abuse from their tour manager for drinking The Delta Riggs rider, The Delta Riggs guitarist and talented engineer and producer Alex Markwell was laughing his head off and a friendship was born. Markwell offered to help produce and engineer the EP so in 2015 the boys decided to hit the recording studio.

Recorded between competing national tours and other commitments, the boys also enlisted the help of friends Dan Crannitch (Love and Other Crimes) to assist with pre-production and Luke Godson (Luke Million/The Swiss) to help capture the more electronic aspects of the band’s sound. The initial session birthed ‘Jamaica', ‘a swaggering hot mess’ (Rolling Stone Magazine), which set the benchmark for the rest of the EP. The first listens from the new recordings are ‘Jamaica’ and ‘She Moves’, available on triple j unearthed, both singles lauded from critics and fans alike. Facebook here.


The video for 'Jamaica' is part story and part music. Musically the band make the most of Jamaica's reggae vibes, and put their own rock'n'roll stamp on the song. Based on this track alone The Byzantines could well destined for greater attention next year.