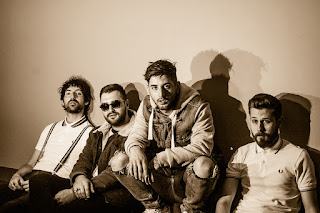 The band share their newest single, ‘Top Boy’ from their forthcoming EP, You Pull It, set to release via Marshmallow Pavement Records on February 17th, 2017. Following the release of their debut EP and a successful European/UK tour in 2014, the boys head out on an east coast Australian tour during February and March in support of the new EP. The tour kicks off at The Karova Club in Ballarat on Friday Feb 24 with label-mates The Montreals, and Melbourne Garage- Rock darlings BATZ. They’ll make their way up the coast on a 9-date tour, hitting Melbourne, Canberra, Sydney, Brisbane and other cities along the way.

There’s nothing pale about these Adelaide lads and best mates; vocalist Michael Pietrafesa, guitarist David Zammit, Jose Moucho on bass and Johnny Zervas on drums. Considered ‘Australia’s answer to Kasabian’ The Byzantines have incorporated a varied mesh of sounds and layers, all the while feeling organic and staying true to the British sound that bands like The Stone Roses and Primal Scream made famous.

After polishing off The Delta Riggs’ rider and copping abuse for it from them manager whilst supporting them at their Rolling Stone Magazine Live Lodge event, guitarist and talented engineer and producer Alex Markwell was impressed and a friendship was born. Markwell offered to help produce and engineer the EP so in 2015 the boys decided to hit the recording studio.

Recorded between competing national tours and other commitments, The Byzantines also enlisted the help of friends Dan Crannitch (Love and Other Crimes) to assist with pre-production and Luke Godson (Luke Million/The Swiss) to help capture the more electronic aspects of the band’s sound. Facebook here. Live dates on our tour page.

Featured in December and back again we have The Byzantines and their new song 'Top Boy'. It's a potent rocker that works well with the video storyline, and the gentle switch of tempo for the chorus is clever and adds a good few more hooks. 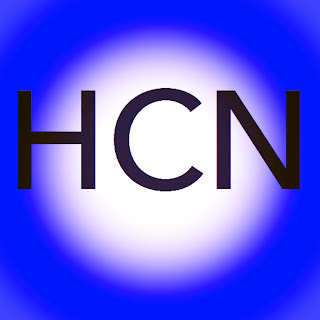 Background - A compilation of BLu ACiD tracks that were released as singles in 2015 and 2016, has been released.

BLu ACiD; two Dutch musicians/producers that joined forces in this production unit. Both of them have more then 25 years of live stage experience and they combine that with 2016 recording and production techniques. Preserving the power and originality of american roots music but at the same time not excluding influences from any other musical styles nor any technology that is available today.

Like moonshine, the music was slow brewed in seclusion during all-night-and-day marathons attended only by the two members and the ghosts of the past, who were eager to have their voices echo into the modern world.

In February 2014 they released their first tracks on Black and Tan Records and April 2014 their first album production: a new Boo Boo Davis release (What Kind Of Sh-t Is This?) After this succesfull project they did several other projects and these tracks will be released individually on BLu ACiD Records, a subsidary label of Black and Tan. Facebook here.

'HCN comprises of six genre meddling tracks, each formerly released as singles. Put together this is a very strong collection of Americana rooted material, that imaginatively travels into other musical territory adding some extra spice. Creative and pleasing it also makes a good introduction to their material. 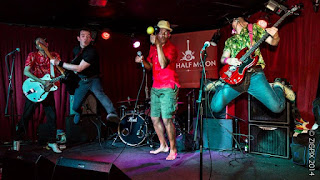 King Salami and the Cumberland Three - Goin' Back To Wurstville.

Their repertoire, while hugely influenced by many of the great though obscure tunes of the ’50s and ’60s, are made to sound fresh and new to modern ears. You won’t be able to help but move your feet when the Cumberland Three are blasting out of your speakers. The King howls like Screaming Jay Hawkins with Bo Diddley chasing his coat-tail whilst Andre Williams tries to offer up some of his bacon fat, and the Trashmen do the Surfin’ Bird behind him, shakin’ and twistin’ and groovin’ non-stop. The Cumberland Three rock up a storm with their own branded mix of vintage rockabilly, desperate rock’n’roll and stomping soul, with fire, energy, gusto and, above all, fun!

The band has played pretty much everywhere in Europe (with more trips to the continent coming very soon) where they fill venues in every town, plus Australia, Israel, Turkey, the USA, even in China (from big cities to rural villages, from Beijing to Shanghai and all points between), and of course Japan (where they performed at the World Sumo Wrestling Champion­ship in front of Empror Akihito, who was unable to stop himself from tapping his toes along to the band’s up-tempo tunes). Indeed, the band’s super fun new video for the title track of this album was filmed during a recent tour of Japan in which local people, young and old, readily jumped in front of the camera to join in with the shenanigans. Bandcamp here. Live dates on our tour page.

King Salami and the Cumberland Three are feisty, thunderous and fabulous. 'Goin' Back To Wurstville' is just a little taste of the bands no nonsense, timeless music. Think good time, add some craziness, a slice of lemon and come join the party! 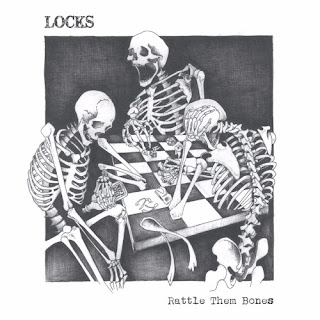 Background - Locks have now released the EP Rattle Them Bones on CD and are releasing it on Vinyl on 24th of February, to co-inside with this we have another single, The Gin Song. This is a bit more Pogues-esq, however they tell us "we're still sticking very much to our Waits/Cave skeleton-bluesy roots though".

After playing with a variety of different bands including rockabilly, traditional Irish, indie and nu-folk, the three misfits found themselves in a rehearsal room together writing parts for murder ballads involving burying bodies, mythological creatures and dark family secrets. Slowly tracking the footsteps of whatever creature has wandered before them, whilst singing songs about whatever's hiding just under the surface or lingering from the corner of their eye, they are together creeping through London's weird and wonderful musical underbelly. Locks hypnotically types out the lyrics on a vintage typewriter and this focuses you back to the sinister meaning of the story of the song.

From the EP we have 'The Gin Song'. We featured Locks last year and on the strength of just one song were pretty optimistic of the good things to follow. The Gin Song demonstrates they can vary their style, the 'Rattle Them Bones' EP confirms our optimism was well founded. Locks readily admit their influences, however rather than being a tribute band for these, they use those influences to create their own sound and material, and I think it fair to say, they do this extremely well. 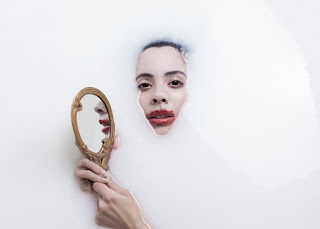 Background - “Music is how I make sense of my experiences. My songs are intimate and cathartic – I hope they can be for others too.”

HEZEN is the creation of London-based French producer and songwriter Sarah Hezen. Her indelible material comprises electronic beats layered with orchestral instruments, tackling themes that explore the body, femininity and the uncanny. Inspired by fairytales and sci-fi, her electro-fantasia soundscape is tender and brutal, organic and synthesised. Her debut EP, Stigma, was released on 27 January, and is a collection of songs about violence and resistance, and wholly conveys the spine-tingling atmospherics that are the motif of electronica’s new sensation. HEZEN will stir something in your heart, and under your skin.

Evoking the sublime unease of Massive Attack and the poignant vocal execution of Sia or Thom Yorke, ‘Oil Fire’ is a downtempo electro masterwork, a redolent digitalist ballad underscored by cool trip-hop grooves. HEZEN sings of resilience, of rolling with the punches, as she produces a beautiful take on the maxim what doesn’t kill you makes you stronger.

Created by HEZEN with her iPhone, a macro lens, and with post-production on After Effects, the striking video captures the singer alone in her room, dressed in clay. The results are raw, vulnerable and claustrophobic, making the body seem reptilian at times, or blistered by flame at others, but also suggesting a tough, protective armour, thus apposite for the theme of this bold and unforgettable track. Facebook here.

Taken from the 'Stigma EP' we have the video for 'Oil Fire'. We also can share the whole EP, a rich collection of material, that demonstrates HEZEN can match her dreamy and somewhat ethereal vocals, to well crafted and creative music.