The Cranberries - Outside The Academy - No Vacation - INHALT - Caravane 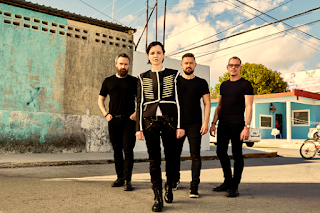 Background - The Cranberries are set to release Something Else, a new album featuring re-worked renditions of their major hits, as well as brand new material. The album is due out April 28 via BMG on digital and CD formats, and includes seminal Cranberries songs like "Linger," "Zombie," "Dreams," and "Ode To My Family"... re-recorded in orchestral and acoustic arrangements. Something Else celebrates the 25th anniversary of the band. Their first major U.S. hit "Linger" has been re-done acoustically.

On the album concept and choice of "Linger" as the first single, The Cranberries' singer-songwriter Dolores O’Riordan explains, "'Linger' was the first song The Cranberries ever wrote together. I was 17, and the youngest member of the band was 15 at the time. We never imagined it'd be such a big hit, but soon us teenagers found ourselves on our first flight to the United States to shoot the video in Downtown LA. That video would introduce us to American households, in the good old days of MTV! The bittersweet love song still holds all that sentimentality for us personally, which is why we had to include it on this project. Universally, I think its message remains timeless and relevant, never going out of fashion, yet never quite in fashion. It's amazing to have a song hold up 25 years later, and I hope this acoustic version allows our fans to hear a Cranberries classic in a new way."

Last year, over two weeks in the University of Limerick, at the home of the Irish Chamber Orchestra, the band revisited old times; Dolores laid down vocals as small booths were created to record the instruments as if live. She was no longer a child, singing her amazing, mature songs from an inexperienced vantage point but a woman now, with the capacity to throw her life at the music, the benefit of hindsight. "I prefer them like this," she says of the new recordings of old songs, "with a little bit more experience behind them, with a new lease of life. They sound fresh again."

It’s testament to Dolores and Noel’s song-writing prowess that the new additions to the Cranberries cannon sit seamlessly next to the old. When they began finalising details for the record, they decided on Something Else, a nod to the first record’s Everybody Else…, a title neither riven with the promise of future endeavours or locked into the past.

Those who have been visiting Beehive Candy for some time may well be aware that I am a bit of a fan to say the least, when it comes to The Cranberries music, both recorded and performed live. 'Linger (Acoustic Version)' is the only song I have heard from the forthcoming album and it leaves me rather excited of what's due in April. Production is superb, the new arrangement mixes an acoustic lead with a delicious string arrangement. Vocals are definitely a little more mature in delivery, and if anything carry even more intensity and emotion this time around. Twenty five years on and The Cranberries continue to excite and impress. 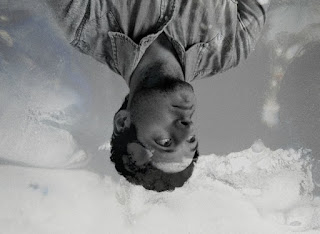 Outside The Academy - Salient - Solutionism.

Background - Hot on the tail of intricate lead single 'Solutionism', Outside the Academy aka Pawel Cholewa (Pa-vell Ho-li-ver) will release his new EP Second-Guessing and next single 'Salient'. Brimming with ambience, glitch, moody dance beats and melodic guitar, Second-Guessing weaves a tangled yet ultimately cathartic web.

The irony of using technology as a method of production whilst actively criticising it is not lost on Cholewa, who admits the EP is the result of "Second-guessing this relationship, myself, others, my music, yet continuously coming back to these songs as a safety net of (mis)understanding." Entirely self-produced, with mixing from Konstantin Kerstig (The Belligerents, WAAX, Morning Harvey), Second-Guessing offers itself as a touchstone for a culture of ambivalent creatives who are only certain about one thing: creating.

'Salient', the ambient, soaring new single taken from Second-Guessing, is part "traditional break-up song", part contemplation on generational divides and the vast ocean of differing lived experiences between oneself and, for example, one's grandparents. Though Cholewa is the first to admit that the song's title is used in a slightly incorrect context, the song's narrative of frustration and angst brought on by irreparable communication breakdown is cuttingly clear. Facebook here.

Taking advantage of the opportunity to stream both single releases from Outside The Academy so here is 'Salient' and the previous single 'Solutionism'. New single 'Salient' has bright jangly guitars and a solid rock soundtrack that accompany the smooth vocals alongside a marching beat. 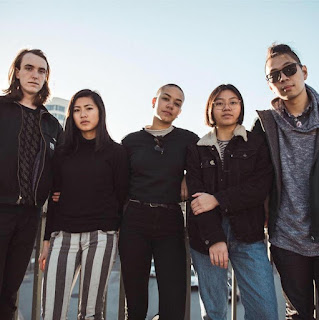 Background - No Vacation is an Indie/Dream-Pop collective that combines the novel sounds of college nostalgia and surf-tinged bedroom pop to create an addictive feeling of weightlessness.

What began as a sunny San Francisco dorm-room duo in early 2015 by frontwoman Sabrina Mai, quickly evolved into a band as Marisa Saunders and Nat Lee entered the fold. Eventually, Harrison Spencer joined and No Vacation migrated from their familiar garage practice spaces to the studio, where they recorded their second release Summer Break Mixtape. This would lead up to their initial break-up later that year. After a year of anticipation, shows under various names, and a few line-up changes, James Shi was added to solidify the official reunion of the 5-piece.

To jumpstart their return, No Vacation have released their new single “Mind Fields” via Topshelf Records. Heavily influenced by the break-up itself, “Mind Fields” highlights the wistful yet buoyant sounds from their upcoming collection, set for release in June 2017. Facebook here.

'Mind Fields' has a gentle surf pop soundtrack and beautiful, genuine vocals, that are delivered with feeling, in what is a melodic and dreamy song. 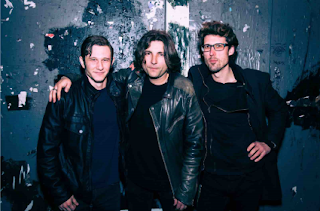 Background - On April 14, dark electronic / minimal synth outfit INHALT will be releasing their new album ‘Part Time Punks Sessions’ via Cleopatra Records, who are giving a taste of the album by presenting the lead single 'Walking on Glass'. Hard-driving, up-tempo, and propelled by German vocals, this and the other tracks offered on this release are sleek, chic and cold, formidably capturing the INHALT sound and ethos.

The 'Part Time Punks Sessions' LP features the best of the band's signature synth-driven dark analog pop. This is both a live and a studio album, having been recorded in real time in collaboration with the Part Time Punks radio show in Los Angeles. This is the band's fourth significant release and final album to be recorded at the band’s homebuilt studio, affectionately called “The Bunker”.

INHALT is German for “content”. This San Francisco-based trio is comprised of Philip Winiger, Matia Simovich, and Steven Campodonico. Winiger, born in Switzerland, visited San Francisco for a year long sabbatical but ended up forming the band with Simovich in 2009. They immediately recognized their mutual philosophy of sonic fidelity and creative integrity, rather than nostalgia.

On the concert circuit, INHALT have a reputation for bringing a tour de force wall of sound with an energetic stage presence. They have played concerts with peers old and new, including Front 242, Clock DVA, Martial Canterel, and High Functioning Flesh. They’ve condensed this raw concert experience into the John Peel-esque Part Time Punks Sessions, to be made available on April 14, both digitally and on CD, via Cleopatra Records with the vinyl release to follow. Website here, Facebook here.

The more I hear from INHALT the more I need to discover more. 'Vehicle' is but a small taste of the band, and the few songs I have heard from the forthcoming 'Part Time Punk Sessions' takes the music a whole lot further. 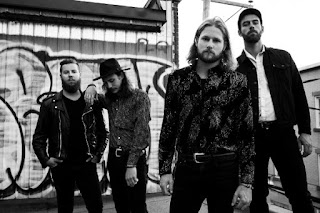 Background - Caravane are back with a second single off their new album Fuego. Featuring Marie-Michelle Gariepy-Rusk, the music video for Boogie Baby, directed by Dragos Chiriac, shows us the daily routine of a young janitor who finds an escape in the band's music. She dances like no one's watching during an explosive performance by Caravane in an infamous bar of Quebec City, Le Dauphin.

Nothing wrong with a little bit of the multi lingual detail, and 'Boogie Baby' came with a promo that ensures nothing gets lost in translation. Actually this is quite a catchy song, perhaps in English 'Boogie Baby' might sound a little disco and dated, but hey I can't do the same in French so what right do I have to complain!