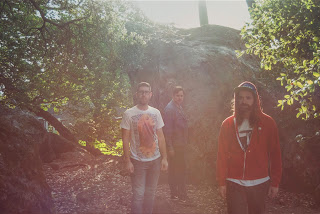 Background - For most people, the idea of “Whisky, Weed, Women and Cocaine,” sounds like a little bit of a lethal combination, but when it comes in the form of an incredibly catchy song by indie-rock trio Exhausted Pipes, we’re welcoming the combo with open arms. Featuring an addicting guitar melody, it’s no surprise the track is named the way it is.

Besides just its catchy nature, the song features stunning vocal work and the resulting piece showcases just how special the trio are in their ability to capture a story so eloquently within the framework of a three-minute song. They’ve been capturing the hearts of San Francisco’s local indie scene for a while now, and it’s no surprise- the catchy rhythm and utter brilliant storytelling make them a serious tour de force in the underground music scene.

Formed in 2011, they are known for their dynamic songwriting and lively performances, pushing the expectations of a three-piece. The trio doesn’t take itself too seriously, and has a solid understanding of their place in the world. The magic of their upcoming release, New Dust, is that it’s an authentic reflection of a specific time and place in history and manages to avoid any pseudo-intellectual or unnecessarily emotional imitations.

The band came together in Stockton, California where Hunter Steers, David Mayman, and Andy Landgraf met at their University in an unengaged community in which active disinterest shaped the culture. Through this, the band learned some quick lessons, and grew enough to make a move to San Francisco where the reception for live music was far greater. Their high energy performances characterised by three part harmonies, soaring solos and wide ranging dynamics began to draw a regular following. The group self-released their eponymous debut album, Exhausted Pipes, in late 2011.

Funded by a self-made Kickstarter campaign, Exhausted Pipes upcoming album New Dust is a reflection of the DIY / start-up spirit of the 21st century. Their music reflects the struggles and growing pains of a new generation in America tasked with identity creation in an inexact time. The band’s lyrics are close to those coming of age in a rapidly evolving culture where relevance is often hard to pin down. The music itself is tightly curated and intelligent, featuring complexed instrumentation's – and even highlights a few featured musicians – yet holds true to the band’s vocally-driven roots. New Dust feels both relevant and emotionally exhilarating  – solid, coherent and wonderfully accessible. Website here, Facebook here.

I think it fair to say that 'Whisky, Weed, Women and Cocaine' is about as rock'n'roll a song title as any band might come up with, this band are however, more Americana-folk with danceable Indie Rock, a fabulous combination when considered. The song is feisty, gritty and just wonderful, I don't think we should take the lyrical sentiments to seriously, just join in have some fun. 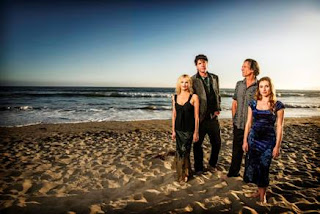 Produced by Karl Derfler (Tom Waits, No Doubt, Dave Matthews Band,) Rolling Sea is a chest of influences and experiences. The bubbly debut single “Magic Potion” will captivate fans of 80’s pop,  “Dance Of The Broken Heart” is a bounty of undeniable hooks and “Sensitive Bad Boys” is a refreshing acknowledgement that some of us are not meant to marry men in suits.  The gorgeous “Sail Away” puts Evie‘s striking vocal talent front and center with “Hobo’s Dreams” and “Miles On The Car” seeing the young hopefuls portrayed in the song reflecting on what to do when dreams do not turn out as planned.

The Dead Sailor Girls’ (comprised of Julietta Hay and Evie Rucker) began when the mother-daughter team were singing with Evie’s sister Haley in their family garage in 2012. There, they sang songs about sailors and the sea, joking that they should start a band called The Dead Sailor Girls. The name stuck and Julietta and Evie were soon joined by bassist Ned Doherty and drummer John Stuart. They performed their very first show on Halloween of 2012 and developed a sound that combines the band’s love of music and lyrics with the soul of their craft.

“Each song on the Rolling Sea album is like a window into a life,”  Evie says. “The lyrics are so vivid and the imagery becomes similar.”  Adds Julietta, “Our songs are inspired by ghost ballads, love songs, punk rock, blues, bluegrass, pop and R&B and most obviously we find kindred sounds in the psychedelic rock ‘n’ roll that was born in San Francisco.” Website here, Facebook here.

The new album 'Rolling Sea' due for release next week comprises of eleven songs and the featured track 'The Last Tasmanian Wolf' gives some feel for this fine album. Indie and alt rock, sometime upbeat and even a little gritty, other times softer and quite refined, the album mixes the genres and every song carries it's weight, well worth a full listen at the least. 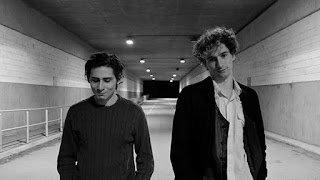 Background - Morning Yawn' is the first single from English alt-pop outfit Febueder's forthcoming EP From an Album. The song is about galvanising against the trickery, the doubt, the hoax – whatever form that may take in an individual's life. The driving bassline, haunting chanted harmonies, and impassioned vocals are the sound of the tether breaking. This is waking up. Directed by Timothy Jacob Elledge, the video brings the gripping track to life with a raw clarity.

On May 12 they will release their From an Album EP, a rousing five track project which harnesses the ambition and creative intent typically reserved for a full length release. It captures Febueder in their element, assured in their ability and vision, and emotionally deft in their approach. Facebook here.

It's the vocals that stand out first of all, followed by a refined and funky soundtrack. 'Morning Yawn' is a very addictive song, that builds into a feast of sounds and is accompanied by a video that interprets the piece with dance. 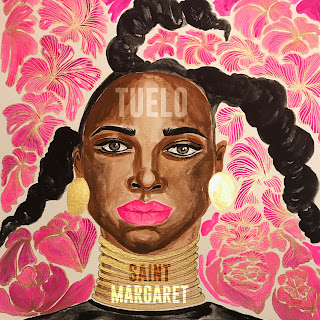 Background - TUELO is led by South African born Tuelo Minah, who blends soul and punk-rock to make what's been dubbed "revival music." She sounds a bit like the rebellious daughter of Nina Simone and David Bowie who grew up listening to the Sex Pistols and Blondie, and took music lessons from Miriam Makeba.

"Saint Margaret" is a homage to Tuelo's mother, Seabi, whose "English" name is Margaret. After leaving her family farm in South Africa and coming to America, Tuelo found her voice and music as a guide to conquer herself. Her mother has yet to hear her sing or see her perform, yet she remains a favorite topic amongst fans because of how Tuelo weaves her into every conversation and every show. Tuelo credits her love for people, environment, tradition, culture, words and learning, spirituality, and her non-conformist and awkward nature to her mum, and often remarks that if somebody had told her as a child that her mother was God, she would have been a believer a long time ago.

​TUELO's unreal vocals have filled some incredible venues - Brooklyn Bowl​, Carnegie Hall, Late Night with David Letterman, Central Park Summer Stage, and most recently The Apollo for the Africa Now Festival. Her next show is on a bit of a smaller scale, at Rockwood Music Hall on May 9th. Facebook here.

Tuelo Minah's powerful and passionate vocals make 'Saint Margaret' an outstanding song in their own right. The music adds more with a well balanced soundtrack, that supports the vocals providing a rock feel to a soulful song.