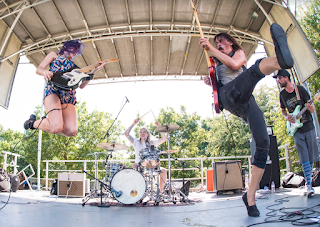 Background - Cosmic vintage metal and melodic neo-psychedelia meld seamlessly in Megafauna’s fourth LP 'Welcome Home. Consequence of Sound described the album, released in May as "Megafauna's most ambitious and imaginative record to date, like St. Vincent for people who love the Melvins."

The Austin-based band led by guitar goddess and singer Dani Neff dives deep into the sounds of soul exploration leveraged on the powerful rhythm section of drummer Zack Humphrey and alternating bassists Will Krause and Bryan Wright.  With 'Welcome Home', Megafauna eschew the progressive rock stylings of their earlier work and reach back toward the proto-metal haze of Black Sabbath and Sir Lord Baltimore while ushering it skyward with sharp melodies and the space-rock production work of Curtis Roush and The Bright Light Social Hour.

The album was crafted throughout 2015 in the cloistered bungalow studio of The Bright Light Social Hour and given a muscular mix by veteran engineer Erik Wofford (Black Angels, Bill Callahan). Through a deep look inside and above for new awareness, Megafauna has forged their most vital work to date.

As I understand it Megafauna's album 'Welcome Home' is going to be released on the 27 May 2017 in the UK, it's actually been around for a while on Bandcamp. This is a really good collection of songs that take you through so many rock genres, with a consistent style and ardent, impassioned delivery. 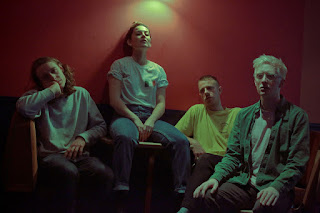 Background - Childcare finished 2016 playing their biggest shows to date – in front of thousands as part of Bastille’s nationwide arena tour. This came hot on the heels of the band releasing killer single ‘Film Club’ to comprehensive acclaim. ‘Film Club’ was the first taster of a new EP that also features the stellar ‘Kiss?’ and represents an emphatic statement sure to cement the adoration of all those newly turned on to the London quartet courtesy of that tour.

It all started when Ed Cares, one of west London's most in-demand male nannies, was overheard humming a song he had written, by Katie, aged six, who persuaded him to form a band. Josh, eight, boldly proclaimed: "You're probably my second favourite artist after Katy Perry."  And so, after sourcing some neighbourhood musicians capable of living up to Josh’s heady billing — specifically Emma Topolski (bass), Rich Legate (guitar) and Glyn Daniels (drums) — Ed soon had an able band to perform with under the only logical moniker in the circumstances: Childcare. Having honed their vivid and visceral live show on stages including Reading and Leeds festivals and now some of the land’s major concert venues.

About ‘Dust’. A riff on the End of Days itself, ‘Dust’ finds Childcare tackling mankind’s inevitable extinction with haunting vocal melodies, scalding guitar work and gutsy rhythms, plus a choral finale courtesy of a choir of heaven-sent angels. The third track to be shared from the ‘Made Simple’ EP, the song’s subject matter is certainly a departure from the band’s acclaimed previous tracks ‘Film Club’ and ‘Kiss?’, as frontman Ed Cares explains:

“Having released some music about kissing mums and fancying a girl, I thought it only appropriate that we now tackled the impending end of the world in a global warming/nuclear strike scenario. ‘Dust’ describes a roasting high-temperature cooking experience and the final thoughts of a man approaching his maker.” Facebook here.

Fervent and succinct vocals and a tight rhythmic soundtrack with plenty of energy, makes 'Dust' a very memorable and impressive song. Lyrics are affecting, the piece as a whole quite compulsive. 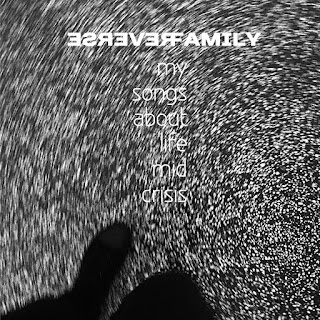 Background - Ever had that dream where an insect invades the ear and sets up home to mercilessly tease and torment thereon in? If so, a form of similar reality is about to be unleashed as the Reverse Family step forward to announce themselves with a sound which trespasses and festers in the psyche. The difference is that this is set to be the most welcome invasion of ears as it crawls with relish into the imagination.

With a tongue in cheek lining to the lyrical reflection shaping songs which spreads into the music itself, Reverse Family is a beguiling adventure with a nod to the past and a grip on an imagination as fresh as it is, well quite simply a touch loco. Website here, Facebook here.

Taken from the album 'My Songs About Life Mid Crisis' released a few weeks ago we can share 'Legend of Pierre' which can only be an indicator of the extraordinary twelve tracks in this collection. Sometimes quite "out there" other times a little quirky, always energised with plenty of rock instinct, I found this one of those albums, that's a little like exploring a new and exciting place for the first time!