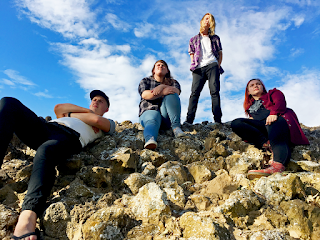 Background - Escape From Yesterday are a four piece pop-punk band from Murray Bridge, South Australia. With tunes much to the style of bands such as Blink-182, Paramore and Fall Out Boy; Escape From Yesterday have taken the Adelaide music scene by storm in less than a year of forming. They are now ready to release their brand new single, Same Old Scene.

The track is about breaking out of your hometown and embarking on your own adventure. Inspired by the band members personal struggles, hopes and dreams, Same Old Scene displays the bands edgy yet approachable style. The combination of punk-rock and funk influences gives the band’s music a very “Funky Punky" vibe. Same Old Scene addresses some very relatable issues that young people face, and the band hopes that the themes in this song will inspire others to take a leap of faith and pursue their dreams.

Same Old Scene was recorded in a brand new studio that has been installed into local venue, The Station. It was recorded by members of Escape From Yesterday, and mixed by Jordan Holmes, vocalist and lead guitarist for the band. “Same Old Scene was written with the intention of inspiring others, but also ourselves” says Jordan, “Sometimes, we need to remind ourselves that we’re capable of more than we think, and we just need to believe in ourselves.”

This year, the band is working non-stop on a debut album, which will hopefully be “released by the end of 2017”. The demo version of their track Run Along has seen positive reviews with Music SA’s Matthew Hayward noting it as “a rousing call and response number featuring some heavy distortion and developing pop sensibilities”. Same Old Scene is rapidly becoming a fan favourite at their live shows. They carry with them heavy sounds and an exciting presence on stage. Pop-punk single ‘Same Old Scene’, due to be released April 28th. Facebook here.

'Same Old Scene' mixes robust guitar fronted rock with more melodic and appealing vocals. Put together they make for a top-notch song, one that suggests a second listen is in order, at the very least. 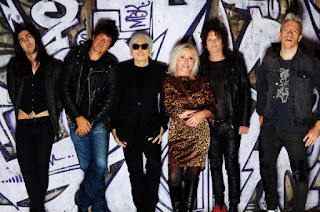 Background - Blondie has premiered the video for latest single “Long Time,” off of the band’s 11th studio album Pollinator, out May 5th (BMG) “Long Time” is the third track from the remarkable new album that perfectly demonstrates the blend of Blondie's pioneering past with new influences from modern music's great innovators - the track is a collaboration between Debbie Harry and Dev Hynes (AKA Blood Orange).

Set in the city where Blondie's story began over four decades ago, the video for “Long Time,” sees the band in a chaotic, fast-paced New York City. Scenes flip between front woman Debbie Harry recklessly driving in a yellow cab and the band playing on the city streets. The video was shot and directed by Dikayl Rimmasch, who also worked with Beyonce on her Lemonade album videos and on her Formation World Tour. Rimmasch also directed the video for Pollinator's debut single “Fun”.

Blondie’s sound and sensibility is as fresh on Pollinator as when they first topped the charts. The band has enlisted an eclectic group of songwriters for their most collaborative album to date. Those offering their own interpretation of the band’s legacy include superstar Sia, British singer Charli XCX, Dave Sitek (TV On The Radio), Nick Valensi (The Strokes), Johnny Marr (The Smiths) and Canadian movie blogger and indie rocker Adam Johnston (an Unkindness). The LP, produced by John Congleton (Franz Ferdinand, St. Vincent, Sigur Ros) and recorded at NYC’s famed studio The Magic Shop, also features vocals from Joan Jett, cross dressing comedian and singer John Roberts and The Gregory Brothers (founders of Songify the News). Laurie Anderson appears on a special hidden track on the CD version.

Blondie will bring their one-of-a-kind live magic to the stage when they kick off their North American co-headlining Rage and Rapture Tour with Garbage on July 5th. The band has also announced a return to the iconic Roundhouse in London on May 3rd to celebrate the release two days later of their remarkable new album. Website here.

Many (many) years ago I went into my local record store to see if they had the brand new (debut) Blondie album. They did not and the shop manager was pretty underwhelmed when a younger version of me suggested they were going to be huge. I ordered a copy and a week later went back to collect. It was one of those fabulous moments when I could not get home quick enough to play it. Sadly like so many record stores it closed many years ago, Blondie on the other hand are still delivering the goods as 'Long Time' confirms. I'm looking forward to Pollinator, albeit without the youthful energy this time around. 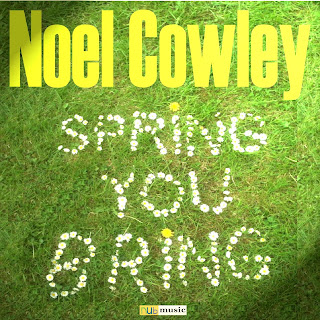 Background - "Stay-at-home-dad-singer-songwriter", to give Noel Cowley his full, snappy job title. This Londoner - and now honorary Essex man - who grew up in Ireland sees music as an essential accompaniment to his life as a parent, together with wife Katrina, of toddler triplets.

It's a far cry from two decades spent flitting in and out of service industry jobs while concentrating on living a musician's life outside of work hours. These days parenting is the focus with music the sideline, and both roles are the richer for it. If there's one continuous thread that runs through Noel's life in music, it's his writing, recording and performing partnership with younger brother Ewan Cowley, the Dublin based musician, producer and solo singer-songwriter/composer.

The two Irish brothers learned to play the guitar together as teenagers, busked pop hits in the streets of Derry and formed and fronted a glam-punkypop band (The Bexleys) in the early 2000s. Latterly they've been collaborating on Noel's solo music, their Beatles and Beatles-inspired influences such as Crowded House and Squeeze sustaining a love of creating easily hummable melodies married with emotive lyrics.

The culmination of the Cowley brothers' work together so far is Noel's debut album produced, arranged and co-written by Ewan. The album is set for release in the summer of 2017 on Indie label Nub Music and the first single from it, Spring You Bring, is out now. Website here, Bandcamp here.

With a sprightly piano rhythm and the impeccable vocals of Noel Cowley, 'Spring You Bring' is a bright uplifting song, given extra vigour as the music develops. 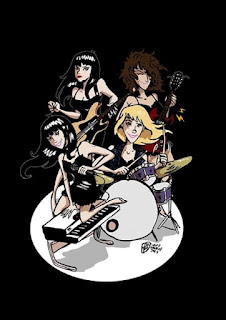 Background - Formed in 2016, The Darts are the explosive union of Nicole Laurenne (The Love Me Nots, Zero Zero, Motobunny), Rikki Styxx (The Dollyrots, The Two Tens, Thee Outta Sites), Christina Nunez (The Love Me Nots, The Madcaps, Casual Encounters), and Michelle Balderrama (Brainspoon).

The debut EP was self-released by the band on ten-inch vinyl in October 2016, with a second EP released in January 2017. The band signed to Dirty Water Records, which re-released the two EPs as one full-length digital album in January 2017. A second full-length album is very much anticipated this summer with six new tracks already in the can and another six almost ready.

“I knew it was special before it even was the beginning,” Nicole said of her new band. “These three women are musicians I have performed with for years and years, watching them and wanting to do this kind of project with them. When Michelle and I finally talked about writing some songs together for real in 2015, it was almost like a fully-formed idea in my head. And it has been so easy to make it all come to fruition, like nothing I’ve ever done before. Even just getting in a van with these people is special. They’re just fun, supportive, hilarious, goofy, and no one takes herself too seriously, which is a pretty hard quality to find in good musicians, if you ask me.”

With two tours of the southern and western United States with Oakland’s all-girl rock duo Steel Cranes and France's Weird Omen under their belts, the Darts are gearing up to take their music overseas for a European tour this May which Louder Than War Magazine describes as "dirty, rough around the edges, good ol’ dive bar rock n roll". Website here, Facebook here.

With some UK and European dates coming up in May and June (see our tour page) it seems like a good enough reason to feature The Darts again, this time with the rather potent 'You Got Me'. 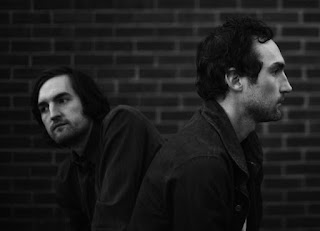 Airpark - Plenty To Pine For.

Raised in New Orleans, the Fords grew up surrounded by music, from the Crescent City's jazz to the soul of Irma Thomas and Allen Touissant. Later while living in Nashville, the two rekindled the music connection they'd kick-started back home, finding popularity as The Apache Relay performed alongside the likes of Jenny Lewis, Mumford & Sons and more. Michael and Ben move at a deliberately different speed with Airpark, thus finding new musical territory to explore.

Taking their cues from a wide set of influences — the rhythmic world music of Tinariwen and Lijadu Sisters; the production of Air, Damon Albarn, and Fiona Apple's The Idler Wheel; the tenor vocal range of Big Star's Alex Chilton and Fleetwood Mac's Lindsey Buckingham, with the occasional pop crooner delivery of Harry Nilsson — the two unveil their new direction with Airpark's debut EP, Early Works, Volume 1.

It's a sound that targets the feet and the head. It's pop music for thinkers. It's dance music for wallflowers. And with the brothers pulling triple-duty as songwriters, multi-instrumentalists and co-producers, Early Works, Volume 1 is their most forward-thinking project to date, pairing the band's growing ambition with musical chops to match. Website here, Facebook here.

Our second feature for Airpark this time with 'Plenty To Pine For'. This is another beautifully crafted song, the duo's ability to write and perform intelligent pop to a high standard is notable, as is their commitment which gently drifts to the fore as the track develops. We featured their current tour dates on our tour page last time around. 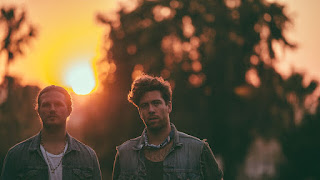 Background - The new video from Frenship is entitled "1000 Nights". When talking about the video the duo states, "We originally had the idea for the video out on a camping trip in Stanley, Idaho. We had just received the song back from mastering and took the first listen on the shore of Lake Stanley at the base of McGown Peak. This place inspired the idea, look and feel for the 1000 Nights video. With the idea in place we sought out a director that could fully capture beautiful shots outdoors and filmmaker Matt Kleiner perfectly fit the bill for this.  The video was shot at Diablo Lake in Washington State." The 'Truce' EP is out now on Columbia.

There's a strong contrarian streak in Frenship, the Los Angeles-based duo of James Sunderland and Brett Hite. James grew up in Colorado and relocated to LA after 4 years of college studying production, where he was part of a DJ duo that didn't work out. Brett grew up in Spokane, Washington with a passion for soccer. An injury led him to discover a burgeoning interest in music and he began to play coffee shops and small venues after college as a singer/songwriter.

Brett and James met while working retail in LA and began to realize they each brought something to the table musically that the other could appreciate. They describe their hypnotic production as a combination of the twosome's affection for 80s-styled pop.

The duo signed on with Columbia Records and subsequently released their debut EP, Truce, in September 2016. Frenship's platinum-selling single “Capsize” was one of the most viral hits of 2016, surpassing 20 million streams in its first month and collecting over 300 million to date. Spotify crowned them #2 Breakout Artist of the year due to the song's chart performance. Facebook here.

'1000 Nights' might slowly fade in, however once the beat kicks in, alongside he distinct and gratifying vocals the song begins to standout. That might have been enough, however the chorus explodes into being, adding something of an anthem vibe taking a fine song even higher.