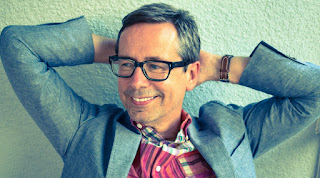 The single is first offering from his eagerly anticipated solo album ‘Woodland Echoes’, due for release on 4th August. A-side ‘Mountaintop’ is inspired by a poignant mountaintop scene in Sam Wood’s 1939 film ‘Goodbye, Mr Chips’, but was written at sea-level and infused with his love for the rootsy sound of Americana. While on the flip side ‘Baby Blue Sky’ The infectiously sunshine-infused 'Baby Blue Sky' is inspired by living and recording on a houseboat in Key West. Featuring ABC guitarist Matt Backer on guitars. Nick describes working with him as a chance to "express their mutual love of the Rubinoos, Big Star and 70’s guitar power pop."

The accompanying video for ‘Baby Blue Sky’ was filmed entirely on Nick and his fiancee's mobile phones. Featuring footage of Nick's American band, it gives us a snapshot of his life in Key West, where he recorded much of the album. "I love the sense of freedom" Nick enthuses, "here we are in 2017 and we can make a video ourselves on our phone and edit it on our computer. I loved the whole process and the lack of rules or formulas." Trained as a commercial artist, Nick's eye for framing an image means he has not only shot much of the video, he has also captured the aesthetic behind the album and single artworks.

Prior to his hugely successful and prolific solo career, Nick came to prominence as the frontman of percolating pop-funk new wave group Haircut 100, a foundational part of the 80s-pop explosion. They released four UK Top 10 hit singles, with their debut album ‘Pelican West’ reaching no. 2 in the UK album charts, no. 31 in USA’s Billboard 200, and ending up being certified platinum by BPI, with Nick gracing the cover of pace setting style magazine The Face.

His recent solo set at this year’s Great Escape Festival - praised by Drowned in Sound as “one of the finest we heard all weekend, his second coming is imminent” - was just a taste of the upcoming full band headline show at 229 in London on Wednesday 19th July. Nick’s return to the music scene and to the live circuit has already seen support across the board from the likes of Classic Pop magazine and Record Collector, while the single already picked up plays on BBC Radio 2 from Vanessa Feltz, whilst BBC London’s Gary Crowley made ‘Baby Blue Sky’ his ‘Record of the Week’.

Nick Heyward might just be back from a long hiatus, but 'Mountaintop' and ‘Baby Blue Sky’ look to firmly consolidate his songwriting credentials among the greatest, and with a brand-new album ready for pre-order through the direct-to-fan platform PledgeMusic and a tour in Autumn, he is here to stay. Website here, Facebook here.

Musically it's a long way from the days of Haircut 100, and a long time since Nick Heyward has released a single, however 'Mountaintop' suggests it's been worth the wait. Drenched in bright Americana, the rootsy musical feel, is accompanied by vocals that are well up for the task, in this first taste of his current musical direction. 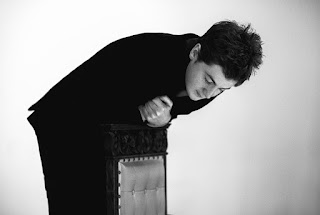 Background - The London-based singer/songwriter George Taylor is sharing his glimmering new single ‘Ophelia’, the follow-up to last month’s ‘The Youth’.

Speaking about the song that occupies the same halcyon-spangled pop dimensions as ‘The Youth’ and ‘Give It Up’, George says: “Ophelia is a song I wrote after a girl I knew was very sadly sectioned and had to spend some time in hospital, thankfully she has since fully recovered. After visiting the hospital it was something I felt I had to write about as it gave me a much clearer insight on the issues surrounding mental health, and the stigma that comes with it. "The name ‘Ophelia’ was inspired by Shakespeare's Hamlet.”

George began drawing attention 12 months ago when his steady stream of singles turned heads at Warner Chappell, who quickly presented Taylor with a publishing deal following over 2 millions streams for his single ‘Give It Up’. From here, Taylor continued to generate attention securing a Spotify playlist spot for his Zane Lowe approved single ‘I Hear Your Song, Sweetness’ and an Apple Music placement for ‘The Youth’, naming it in their ‘Best Of The Week’ playlist. Website here, Facebook here.

What starts out as something of a intimate singer/song writer piece soon builds into a powerful alt rock song. 'Ophelia' includes some twists and turns, mixing melodic gentle moments, with passionate full on rock and it's beautiful. 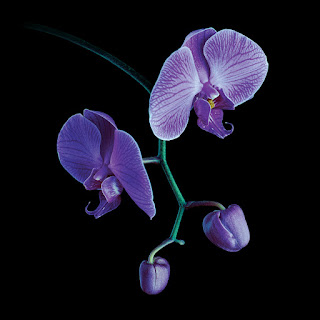 Background from Raveen - Our debut LP Always is our attempt to tell a story with an ambition and scope greater than any of our previous work. It marks our foray into more subdued and lush songwriting anchored by vulnerable, heartfelt lyrics presented as a cohesive whole.

This track came together immediately after our singer/producer Eric took a long and introspective trip to Europe.

There’s a lot of love in this song. Thematically, it serves as a good summary of the of rest of the record; themes of loss as it relates lost love but also grief, and the perceived loss of something magic in the early stages of adulthood.

This is also the most collaborative 3 minutes we’ve ever worked on. It features the three of us, plus contributions from ten or more vocalists and four or five string players - some of our best friends among them. Facebook here, Bandcamp (pre-order) here.

'Always' has a lush arrangement, mixing beautiful harmonies, and some exquisite music. The lead vocals convey a personal and heartfelt need to be heard. Collectively this one song has clearly been a labour of love, that deserves to be noticed far and wide. 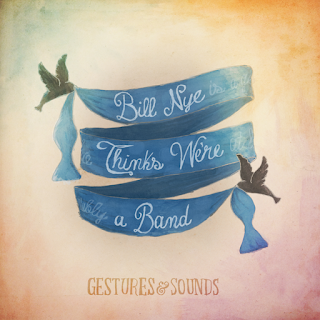 Background - LA-based, folk-pop outfit Gestures & Sounds are proud to release their self-produced music video for first single, "Ass Over Tea Kettle"; the lead off track from their upcoming full-length debut, Bill Nye Thinks We're a Band.  To match the upbeat energy of the track, Gestures & Sounds used their video production expertise to craft a product that is full of colourful swirling imagery and pure lyrical passion that even pays homage to the band's childhood hero... Bill Nye the Science Guy.

Gestures & Sounds is a one-stop shop for a great time. Their compositions utilize authenticity and real feelings. Mostly because they don't know how to be any other way.

Though based in Los Angeles, the band's origins date back to Wisconsin.  After reconnecting once on the west coast, songwriter, Eric Fashingbauer, started introducing songs to the other members and the project evolved from there.  Playing everything from guitar to trumpet to harmonica, Eric and the rest of the band turned acoustic folk songs into full-fledged indie-pop grooves.

Silly and self-aware, the band's debut album Bill Nye Thinks We're a Band takes its inspiration from a speech they saw the famed scientist give on a college campus.  Almost highlighting their future goals, Gestures & Sounds hopes to one day be big enough to attract the attention of their childhood hero.

Blurring the ever-hazing line between visuals and music, they also churn out their own video content. Talented filmmakers as well as musicians, G&S create all of their own music videos from start to finish. They’re in a venture all their own and offering an experience to anyone who appreciates a cut to the beat.

'Ass Over Tea Kettle' is a feisty slice of modern folk pop, that is very catchy from the outset. The video adds a further sense of fun, energy and total musical commitment from the band.