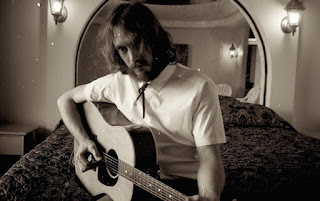 Background - Ben Bostick is a Carolina-raised, California-based outsider country songwriter, musician, and busker. His influences range from Johnny Cash and Bruce Springsteen to Waylon Jennings and The Band. “A little bit outlaw, a lot of heart, and all authentic country” (Smalands Country Club).

Ben Bostick’s debut album has been a long time coming for this 33-year-old. Although his love of music and songwriting started in his early teens, the prospect of making a living from his passion seemed both impossible and sacrilegious. Having grown up off the beaten path in South Carolina, he’d never met a professional musician—plus the thought of desecrating music with money and ambition made him uneasy.

At eighteen he left home for a decade of rambling, writing, and odd jobs—roofing houses, working on ranches, working on movie sets, to name a few. He saw the country, met people from all over the world, and lived in New York, Nevada, Washington, Paris, Providence, and Los Angeles. Then one day in LA, on a whim, he went busking on the Santa Monica Pier. That day changed his life. As he wrapped up three hours of playing his original songs to appreciative audiences, he discovered he had a full tip jar. Busking was everything the dying music industry was not: fun, honest, lucrative, and artistically free. A street performer was born.

Ben saved his busking money and recorded his debut EP, My Country (2016). No Depression said, “he comes on like an unholy alliance of George Jones and Merle Haggard,” and Jolene called him “the closest thing to a sure bet that I’ve seen in a new artist.” The My Country EP was nominated for an Independent Music Award in the Roots/Country category and earned Ben a spot in the Songwriter Serenade songwriting competition in Moravia, TX.

Ben Bostick’s self-titled debut LP is set for release today July 7, 2017. A tour will follow in the fall. Until then, you can find him every Sunday night at the Escondite in downtown LA, tearing through a set of barn burners with his band, The Hellfire Club.

Ben Bostick makes his living (and a good one) as a busker on the Santa Monica Pier. Calling his brand of music ‘outsider country’, Bostick explains how he coined the term. “My music doesn’t quite fit with the outlaw label, nor am I trying to imitate the classic artists and alt-country seems to be a genre with its own set of conventions. “ Website here, Facebook here.

One of ten notable songs on Ben Bostick's debut album 'The Juggler' is a rousing and high spirited piece, with a suitable video to match, complete with some cool juggling skills and a delightful stage setting. Ben's vocals are astonishingly addictive, and surrounded by some high quality musicianship. The album mixes more upbeat "outsider country" alongside some rich & powerful ballads. Country music fans (old & new) should love this, however I reckon Ben Bostick will reach well beyond that, to a much broader audience, and on the strength of this collection of music, he deserves to.

ben bostick said…
Hey Beehive Candy! it's Ben Bostick. Thanks so much for premiering my video. I just realized I screwed your video, because I re-uploaded the video this morning. Here's the new link: https://youtu.be/Fo7Mpi176pc THANKS!!!
7 July 2017 at 14:42