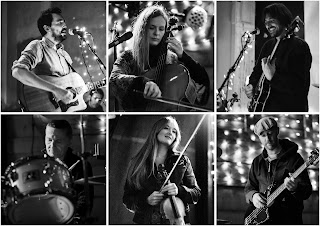 Background - The Sweetheart Revue came into being when lead singer Gerard Sampaio tried to impress a woman at a party by saying he was in a band (which he wasn’t) and inviting her to see them play. Gerard had plenty of songs scribbled in notebooks at this point, but had never actually sung a single one in public. Friends were called, favours were begged, a practise was scheduled and a few days later The Sweetheart Revue took to the stage.

That was pretty much the last time The Sweetheart Revue did anything in a hurry. They’ve been working on this album, their debut, for years, too many to mention, recording songs here and there, getting distracted by day jobs, having kids, that sort of thing. Along the way, they’ve played at Celtic Connections, The Kelvingrove Bandstand and The Grand Ole Opry (the one in their hometown of Glasgow). They’ve ventured as far North as Elgin, as far south as Pollokshields, and had a song featured in a Hollywood movie.

The result of this unhurried approach, of making music purely for the love of it, is a beautiful and diverse collection of songs, rich in warmth, texture and finely-honed lyricism. The album blends indie, rock, folk and country; real delicacy, gorgeous harmonies, grit and noise. All good things to those who wait. Facebook here.

'Civilised' is a clutter free melodic song where each musical element has it place without hogging the limelight. Vocals are bright, smooth and add an extra layer of energy. 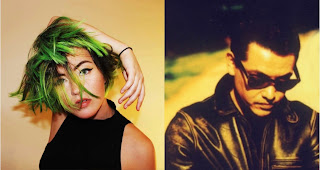 Background - SPC ECO has released their new album 'Calm', which follows their 'Under My Skin' EP, released earlier this year.

If the demise of ground-breaking duo Curve was a storm-cloud in the musical skies of the 90’s, the silver lining was that Dean Garcia went on to form SPC ECO with Rose Berlin. This a coming together of an electronic musical maverick and a vulnerable yet tender vocal style and even more endearing is the fact that this is informed by the bond of a father and daughter exploring their relationship and the world around them through music.

This bond lies at the heart of the music, and is something that goes beyond two musicians creating heartfelt sounds and becomes the language of their very souls, a conversation that is often too difficult to be encapsulated by mere words. Like many worthy conversations, Dean and Rose choose their words and make their plans carefully.

“When we started this record in early January 2017, we knew we wanted to take our time with it, no need to rush it out and go with the first ten songs we recorded, I think we made almost 3 albums worth of songs with this one so there are some cool outtakes to add or use as the album gets underway,“ says Dean Garcia. Website here, Facebook here.

We featured SPC ECO back in January with their 'Under My Skin' EP describing that collection of material as "an aural feast of quality." Now we have the new album 'Calm', which carries on from where the EP left off. Powerful and with rich layers of stunning music, the vocals are deep within the mix but not lost, rather embedded and merging with the music that swirls around them. 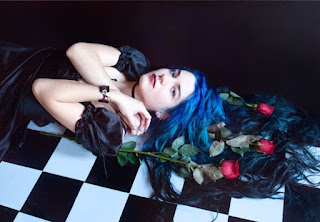 Talullah Ruff - What Is Honest / I Am Not.

Reflection lies at the core of Ruff's art, her lyrics acting as mirrors for what she internalizes about herself and her experiences of dejection. She seeks to create sonic worlds for her listeners, while also attempting to forge refuge and connection. With over 200 unreleased songs and 2 unpublished novels to her name, What Is Honest represents a curated collection of her works from freshman year of high school to her sophomore year in college. Blending 1970s-esque production with 1990s alt-rock songwriting and aesthetics, Ruff has built her own brand of art rock, in which she seeks to blend each eclectic side of herself. Using piano and vocals to drive forward her heart-rendering lyrics, her music suggests a nostalgic nod to her inspirations, such as Fiona Apple, Jeff Buckley and Tori Amos.

The album artwork, drawn and painted by Ruff herself, evokes a sense of rawness and honesty. The image of a half naked women with a flower head - with no intention to instill any level of shock-value - was meant to embody the simplistic beauty of the human body and the natural forms taken for granted or warped by our own misconceptions. The red rose symbolizes the stigmas that come with womanhood and others' expectations and projections onto Ruff. EP tracks such as, "I Am Not," and title track, "What Is Honest" touch on these influences - both external and internal - that evoke negativity and anxiety, but push through the issues with intricate lyrics and brazen vocal melodies. Facebook here.

We have a couple of songs from the new EP 'What Is Honest' and 'I Am Not'. Talullah Ruff's vocals are distinct, sometimes sombre & perhaps a little mysterious, but always engaging. The music finely matches the feel of her voice, with each composition beautifully thought through and delivered in an outstanding manner.