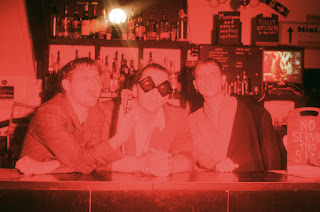 Trudy and the Romance - Is There A Place I Can Go.

Background - Somewhere among the daydreamers and heartbreakers, beauty queens and jock teens, Trudy and the Romanceare looking to lure you into their suitably skewed, cinematic world. On new single Is There A Place I Can Go’, the trios dubbed Mutant 50s Pop takes a more contemplative turn. The single is part of their Junkyard Jazz EP, which will be released through B3SCI on November the 17th.

Their upcoming Junkyard Jazz EP - recorded in former vicarage, Stockports Eve studios with producer David Pye - takes its title from another genre they use to describe their seemingly hotchpotch influences. “Our stuff’s like a collage and we’re trying to jigsaw it all together, explains Olly.

“The songs on the EP are meant to be loose but compact. It ties together as a bunch of different little stories; Junkyard Jazz, a messy love.To call Trudy escapism would be too easy. As with any great pop music, location falls into irrelevance. Whilst most bands dream of a world they can leave behind, Trudy is the sound of a band with their eyes-wide and keeping every option open. Live dates are over on Beehive Candy's tour news page, website here, Facebook here.

We featured Trudy and The Romance a couple of times in 2016 and the new track 'Is There A Place I Can Go' is well worth a share. The mutant 50's pop description helps to summarise the feel of this song, the timeless nature of this piece, the loose swaggering vibe, this is just fabulous! 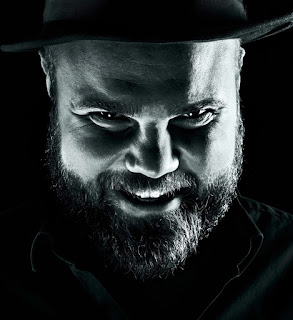 Background - ’The Rotten’ is the new single by German blues rock act out now WellBad from the album ‘The Rotten' (UK release date 29.09.17 -Blue Central Records/Membran).

His raspy voice is as dry as the soil in Death Valley. His full beard is as prickly as a desert cactus. And the atmosphere in his songs is reminiscent of movie scenes shot by Jim Jarmusch, Quentin Tarantino and David Lynch. The 27-year old singer and songwriter Daniel Welbat is an engaging, passionate entertainer and, together with his excellent band WellBad, he has impressed critics and enthused audiences wherever they have performed their very own brand of modern Blues Rock.

WellBad will release their third album, ‘The Rotten’, in September. Paired with the raw,dirty sound of his bandmates, the Hamburg-based Welbat creates an idiosyncratic blend of styles that easily transports a classic Blues vibe right into the here and now. ‘The Rotten' is a genre-defying, elegant mix of Rock, Blues and Jazz and is produced by Stephan Gade (Udo Lindenberg, Niels Frevert), who also worked on the band’s second studio album, ‘Judgement Days’, in 2015.

WellBad have not only made numerous appearances already on major German TV stations, but they also made the podium of the ‘European Blues Challenge’, held in Torrita di Siena, Italy, in April 2016. Thatsame year they also represented Germany in the world´s largest international Blues competition in Memphis, Tennessee. In addition to some memorable concerts, the band had the chance to record a single in the legendary Sun Studios. Website here.

'The Rotten' has an uncomplicated blues rock soundtrack, that is just right for the gritty and menacing vocals. Hypnotic, rocking and at just under two & a half minutes duration, the song just begs to be played again.

Background - New-wave experimentalists Adam & Elvis unveil the uptempo intricacies of latest release, ‘She Bites Mosquitoes’, the track is taken from the band’s album, ‘Through Snow and Small Talk’, released Sept 29th. Artfully displaying Adam & Elvis’ musical intuition, adroit syncopation and effortless manipulation of the Western scale – all set to a mesmerising surf-rock-meets-synth-pop pulse – ‘She Bites Mosquitoes’ deals with the hierarchical nature of young love and, so explains vocalist Patrick, “the desire to infiltrate tribes where you are 'Untermensch' (inferior people)”. This is something of a paradox given the superior sonics of Adam & Elvis’ new release, but then here is a band who make it their tune-filled business to defy accepted convention.

Bonded not only by blood but a taste for finding humour in the macabre, Patrick and Tom Malone are brothers whose sibling intuition extends to a penchant for songs as melodic as they are bizarre. Cut-throat guitars, dirty basslines and contorted synthesisers are their tools as the brothers pen hook-filled numbers with strange, poetic lyrics, often influenced by the stark realism in the wordplay of Patrick’s heroes Leonard Cohen and Charles Bukowski.

This bold, thought-provoking prose is set to a musical backdrop of exhilarating wall-of-sound pop and primitive punk energy, unleashed by Patrick on guitar/vocals and Tom on bass/vocals respectively, with the aid of Steve Wraight (vocals/percussion) and Dan Robershaw (guitar).

The Reading band have performed their adventurous, singularly intense live shows on the same bill as Fat White Family, The Zombies and The Correspondents, and garnered resounding praise for their blistering debut single, ‘Hanging Tree’, taken from their first long-player, Through Snow and Small Talk, to be released on the band’s own DIY Freak Power label in the autumn of 2017. It’s an album fizzing with ideas and energy, capturing Adam & Elvis in all their irreverent, witty and experimental glory, the sound of a group that have come of age and are proving as hard to pigeonhole as they are to ignore. Bandcamp here, Facebook here.

Musically vibrant and upbeat 'She Bites Mosquitoes' is a feast of sounds and fabulous vocals. Different and a little eccentric, just makes the whole thing even more wonderful, here's looking forward to the album. 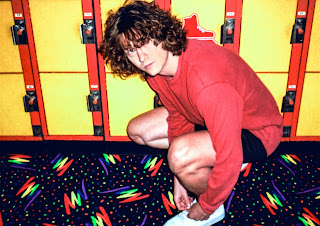 Background - Copenhagen based artist M.I.L.K. (real name: Emil Wilk) today releases the video for ‘If We Want To’ - the penultimate video in a line of 6 video releases, lifted from his acclaimed debut EP ‘A Memory Of A Memory Of A Postcard’. The video was co-directed by M.I.L.K. and Jonas Bang.

An intriguing concoction of tropical production, swaying percussion, and sumptuous melodies, M.I.L.K. is an artist who wants to do things a little differently. M.I.L.K. is the sound of summer and sand between your toes. In these uncertain times, we need all need a positive breath of fresh air. That's what M.I.L.K. is.

Fresh from signing to Capitol Music France and Interscope in the US - M.I.L.K.’s debut EP is a perfect introduction to his intoxicating brand of RnB-tinged yacht rock.

Speaking on the video releases, Emil Wilk said: "I really felt a need to create something physical for the EP. It’s so unsatisfying when everything ends up as streams and links and statistics and internet, internet, internet. So I decided to create something that was more than just mp3 files, and create this video installation to give the EP a visual manifestation in a physical form. The footage is a mix of analogue 8mm shots from travels with friends during the last 6 month, and then more abstract studio shots. It's kind of a diary collage built around the themes and memories that inspired the songs on the EP.” Website here, Facebook here.

'If We Want To' is a smooth melodic song, which exudes beautifully chilled vibes throughout. Imaginative, the music is quiet blissful, the vocals simply charm the listener, this really is music that's good for the soul.