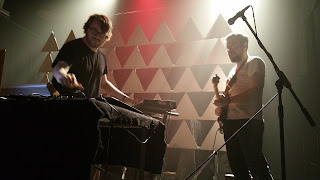 Background - British electronic duo Broads have announced that they'll be releasing their new album 'Field Theory' in the new year.  But for now, they present the first single from that 11-track album, called  'Climbs', which features mesmerizing vocals from Milly Hirst, who also co-wrote this track with band members James Ferguson and Mark Jennings.

Mainstays of the Norwich music scene, Broads deliver a variety of music - always delicious - ranging from synth-pop bliss to a hybrid fusion of genres straddling the divide between ambient drone, post-rock and shoegaze. Broads takes a fascinating approach with this album, tastefully showcasing completely different sides of their musical spectrum.

‘Climbs’ recalls Melody’s Echo Chamber and Broadcast, while 'The Lecht' brings to mind both Mogwai and Boards of Canada. 'Mixed Ability Sequencing' most strongly aligns with My Bloody Valentine and Slowdive, leaving you hanging with less than minute of pure guitar reverie, while 'Habitats' brings the duo delightfully close to New Order territory.

After several releases as a solo artist, James Ferguson says Broads’ dynamics started to change with the release of the ‘Hellas’ LP (Jan 2016), undergoing a kind of sonic breakthrough with Mark now joining James for live shows and co-writing one of its tracks ‘Soft Homo’ – the first time Broads had really arrived at their now-signature sound, marrying droning, lo-fi synths and slow build through repetition with straightforward electronics. FACEBOOK.

'Climbs' is a good indicator of  'Field Theory' the album due in the new year. Although the featured song has the additional benefit of Milly Hirst's gorgeous vocals, the duo are creative and adventurous across all eleven tracks, allowing their imagination and creative minds to develop some very engaging music. 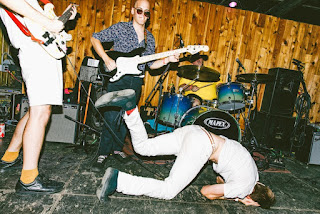 Background - Austin's favorite punks, Big Bill, have been busy gearing up to release their debut LP, "Stand By Your Bill." We get the first gift and glimpse from that new LP with the release of their video for "Pharmacy,"

“Pharmacy” was originally an acoustic country demo that members, Alex and Eric, put together. It eventually became simpler and accompanied by more aggressive, shouting vocals. The track is the narration of a person afraid to admit any vulnerability, thinking that doing so will do him in. Instead the ridiculous solution offered is to avoid admitting you're sick, and avoid taking medicine. It's a steady progression from the pharmacy, to the infirmary, to the mortuary, and finally to the cemetery. Maybe a bit morbid, maybe a bit strange, but guaranteed to be stuck in your head.

Big Bill is a punk band made up of brothers Eric and Cody Braden, Alan Lauer, and Alex Riegelman. The band formed in 2011, when Eric moved back to Texas from New York, and Cody finished college in Houston, though the seed for the band was planted years earlier, when the Braden brothers were in high school. Eric and Cody wrote countless songs together despite being untrained in music, and made entire “albums” of bizarre homespun folk, found sounds, and bad jokes. Even in Big Bill’s current, slightly more professional compositions, the element of the outsider artist that set them and their sound apart lives on.

Vocals with plenty of punk attitude are accompanied by a guitar lead no nonsense rock groove on 'Pharmacy'. At just over two minutes a second play is almost mandatory, whilst the video suggests Big Bill have a good sense of humour and fun.