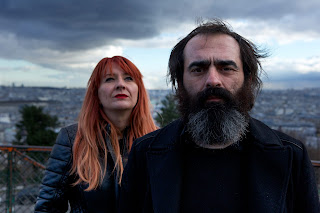 Background - French psych duo The Limiñanas have released a new track taken from their ‘Istanbul Is Sleepy’ EP out 17th November. Featuring acclaimed French accress Emmanuelle Seigner, 'Shadow People' was recorded in The Limiñanas' home studio in the South of France, and finished at The Brian Jonestown Massacre's Anton Newcombe's studio in Berlin.

Lionel from the band explains: "The shadow people are an American myth, they are described as furtive apparitions, comparable to ghosts observable from the corner of the eye. These "spirits" accompany throughout your all life, a sort of paranormal glue stuck to you... Emmanuelle came to visit us in the South of France, and we asked her to sing "Shadow People" with Renaud Picard, the singer from Hair and the Iotas.

We recorded it in just a few minutes over an afternoon...". Emmanuelle Seigner added: "A friend introduced me to The Limiñanas, I was in love with their Music. Three days before our first meeting, Lionel Limiñana called me and offered me to sing on one song off their new album. He sent me 'Shadow People'. Then we recorded directly at their home, it was fast, easy and pretty natural". FACEBOOK.

We first featured The Limiñanas around six weeks ago, & following quickly after we now have 'Shadow People'. Last time we mentioned that the song was psych through & through, with the latest track there is more melodic sound and the mixture of vocals adds to a catchy & richly layered piece. 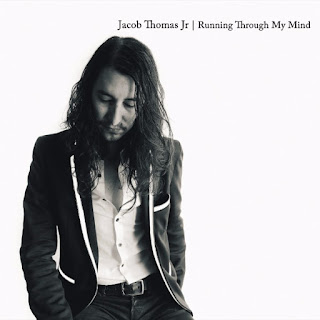 Background - Nashville artist Jacob Thomas Jr. has released "Running Through My Mind," the second single from his upcoming LP, Electric Sex, out February 16, 2018 on Summer Dress Music. "I wanted to write about my divorce, but I’ve never been someone who’s able to articulate thoughts and feelings while I’m in the midst of extreme emotional situations," reflects Jacob. "I find it more beneficial to wait until there is some time and space to gain perspective. ‘Running through My Mind’ is hard to talk about. It’s one of those songs that reminds me of a period in my life when I was a person that I no longer am. It’s not a cryptic or vaguely written song. It’s about as straight forward as a song can get.”

Jacob’s debut album, Original Sin (2014), was a solo-acoustic dive into his past that explored the path that brought him to Nashville in 2008. On that brutally honest debut, we learned about his dramatic shift from Louisiana pastor to Nashville musician. After being fired by his own Parrish for spending too much time performing in bars, Thomas made the incredibly difficult decision to leave his wife and pursue music full-time in Nashville. If the bare-boned songs on Original Sin shone a light on Thomas' ability to pack a punch with little more than an acoustic guitar and a gorgeously ragged voice, then Electric Sex — full of heartfelt, anthemic anthems about getting laid, getting lost and getting left behind — shows the full range of his abilities. Electric Sex explores his life after the church, with Thomas telling us, “At 25 years old I said ‘f it all,’ and this album is me trying to reclaim my sexual identity after years of growing up in the church.”

'Running Through My Mind' is one of those songs where less is more. Heartfelt, personal vocals that are full of emotional intensity, are backed by a beautiful musical arrangement that slowly builds adding to the mood. 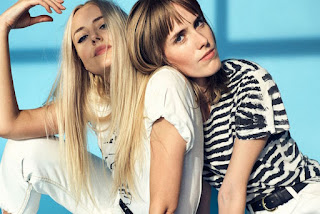 FHNY continues the band's collaboration with Adam Schlesinger (Fountains Of Wayne, Ivy) who also produced the All Work EP. Reni says, "After releasing All Work, we entered a new stage where we really honed our sound, lyrics, and mood... the new batch of songs takes everything to the next level." Adds Anna, "We want to sing about things we really feel and have fun at the same time."

After releasing the All Work EP, Fever High began to play live, with Adam and drummer Brad Wentworth joining Anna and Reni onstage for a run of club shows, as well as a string of dates supporting synthpop pioneers Book Of Love. They found radio support from influential stations like Los Angeles' KCRW and Austin's KUTX, and their songs showed up in numerous films and TV shows, including the CW comedy Crazy Ex-Girlfriend, Netflix’s To The Bone, and three songs in the 2017 film Fun Mom Dinner. WEBSITE, FACEBOOK.

The opening piano chords had me interested, then when the vocals kicked in 'Casting My Spell' had me hooked. The production quality gives away that this is a more recent song, the style however is timeless & gorgeous.