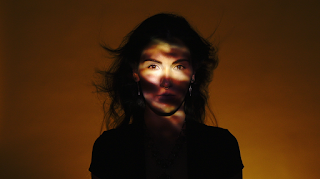 Background - Born and raised in Venezuela, steeped in the ancient traditions of the East, living in the US, and traveling the world, sharing her powerful message, modern-day troubadour Dhanya is the female voice of the global, conscious music scene we’ve been waiting for.

Dhanya’s father, two-time Latin Grammy-winner Ilan Chester, had her playing piano and singing harmonies to Beatles songs while she was still in diapers. A self-professed music-nerd, her gift for poetry and singing blossomed in early childhood, and gave her a voracious appetite for music of all kinds. Her parents infused her with the teachings of the Bhakti tradition of the East, opening her ears and heart to the devotional sounds of kirtan, qawwali and other devotional musical styles. As a teen, Dhanya gravitated towards the burgeoning Venezuelan underground electronic music scene, expanding her influences into the electronic and experimental genre. Seeking to deepen her spiritual practice, she spent time living in West Bengal, India where she studied literature and the traditional devotional music of Bhakti; kirtan.

Dhanya co-produced her self-titled debut (due out 2/2/18) with acclaimed artists Robin Livingston, Ben Leinbach and Mayapuris, and the album features MC Yogi and renowned lyricist Bali Rico. Her soulful alt-pop aesthetic is counterbalanced with gritty electronic influences and Eastern instrumentation, including the mridanga drum, bansuri flute and esraj. Her sound marries East and West, modern and classical, speaking to her expansive musical range. Complex harmonies and uncommon time signatures are common place and Sanskrit verses intermingle with visceral poetry. “My lungs will sift the soil, filter water through my bones. All my organs like an organ with a hundred sacred tones” she sings over the 7-beat pattern of “Lesson.”

It is deeply exploratory album, as if Bjork collaborated with Ibeye and Nusrat Fateh Ali Khan yet amidst the collection of mystical soundscapes, there remains a constant focus on Dhanya’s soaring vocals, which exhibit a personalized and exotic emotional range. “As an instrument, the voice is alchemical,” Dhanya asserts. “It has the potential to transform all feelings and experience into sound.” WEBSITE.

Musically this is tapestry of sounds intricately woven together to provide a fascinating backdrop for Dhanya to sing beautifully above. 'Lesson' is seven minutes of artistic inspiration. 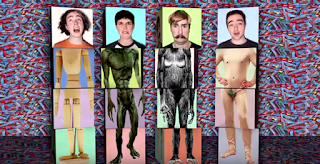 Background - The Spook School shares the third single and video from its eagerly anticipated third album Could It Be Different?, due Jan. 26, 2018 on Slumberland Records and Alcopop! in the UK.

If a debut LP is an artist’s introduction to the world and their sophomore release is their now-or-never moment, their third is their most cathartic: they’ve made it out, they’re here. Glasgow, Scotland’s indiepop optimists The Spook School, despite personal and political obstacle, made it out, and their latest full-length Could It Be Different? is here. It’s been a journey of self- discovery and feel-good realism; modern, dance-friendly indiepop fueling the fun. They made a name for themselves for their exultant and empowering pop, and now, they’ve shown real growth in nuance.

The Spook School are Nye Todd (guitar/vocals), Anna Cory (bass/vocals), Adam Todd (guitar/vocals) and Niall McCamley (drums). Could It Be Different? is a human release—a record full of the insecurities and anxiety that
arrive after self-awareness, in learning something new and potentially frightening about yourself. But at it’s heart is joy—there’s no desolation on the LP, because The Spook School manage to find light in moments of darkness. All things glum must pass—even if hope comes only in the form of acceptance.

“We try to take sad songs and not shy away from them, but come out thinking ‘things will change.’ Otherwise everything would be dreadful and I feel bad enough as it is,” Niall laughs. “We need a bit of light in our lives.” Adam agrees, “We started this for fun. We want our shows to be fun. We want the people who come to our shows to feel welcomed, and to have fun. There’s a bit of party in our songs, no matter what the subject matter is.” Why cry when you can dance? BANDCAMP, FACEBOOK. 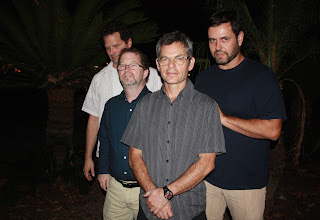 Background - Refrigerator will release its eleventh full-length album, High Desert Lows, on February 9th via Shrimper/Revolver. Produced by Omaha-based songwriter Simon Joyner, who also plays and sings on much of the record, it features all of the group's original members (which include Shrimper Records founder Dennis Callaci and vocalist/author Allen Callaci.)

Album track "Cardboard Death Elevator" is minimal and melancholic, with Callaci's vocals front and center above a delicate mix of guitar, drums, and a haunting layer of strings and piano flourishes.

Refrigerator will celebrate the release of their new album with a performance at Pomona's dA Center for the Arts on March 3rd, to coincide with an installation of 100 hand-drawn "imagined" cassette releases on Shrimper. PRE-ORDER.

'Cardboard Death Elevator' calmly arrives with a stripped back musical sound, that nonetheless has a level of emotional feel to support the personal and melodic vocals. 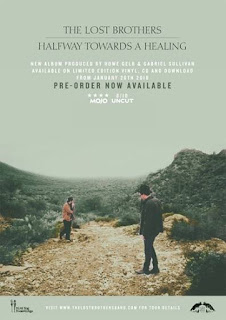 The Lost Brothers - Halfway Towards A Healing.

Background - The incredible earthy and organic new album ‘Halfway Towards A Healing’ from The Lost Brothers is stirring up a storm as it fast approaches release date, the 26th Jan. To accompany this suspense, The Lost Brothers are about to embark on their UK & International tour, kicking things off in London at the end of the month.

There is something special about two musicians in unison. Solo artists bear the brunt of pretty much everything – be it success or failure, joy or misery, it is all on their shoulders. Groups, meanwhile, are mostly perceived as ideal examples of democracy, when the reality is that they are governed by a benign dictator (if lucky) or a cruel despot (if not). Duos, on the other hand, are clearly in tune (and harmony) with themselves and each other.

As if proof were needed, take Oisin Leech and Mark McCausland as the perfect example. Having had previous lives in major label rock acts (respectively, The 747s and The Basement), the two Irish songwriters and musicians first met in 2007 after their bands had slowly slipped off the radar. “We both found ourselves at house parties in Liverpool,” recalls Oisin, “and discovered that we had the same musical tastes. We started writing songs together for fun – no strategies, no game plan.”

The musicians’ instinctive gravitational pull presented them with the ‘Lost Brothers’ tag, but the name quickly stuck. Indeed, as the songs began to develop, the name started to make even more sense: the music was knocking on doors looking for a home, while the delivery of the songs was hushed to the point where you had to listen very carefully for the beauty of (and melancholy in) them. WEBSITE.

Halfway Towards A Healing Tour 2018:

A rhythmic blues feel introduces ‘Halfway Towards A Healing’ as it slowly moves along. The vocals are centre point and inviting, the atmosphere is everywhere, this is one big invite to come and get the album! System Corporation began in 2011, based on a conversation between Phil Somervell (The Datsuns) and their long standing engineer Scott Newth about swapping demos. The two were sharing a flat in Stockholm while The Datsuns were working on their fifth album ‘Death Rattle Boogie’. The two were eventually joined by Datsuns’ bandmate Ben Cole (also in The Joint Chiefs) on drums, and Andrew and Kent Newth (Rumpus Room).

The new single was inspired by poor voter turnouts at elections around the globe. "This touches on how political leaders try to sway you one way or another.  But the idea that Apathy Is Easy stems from the growing number of people who don't vote, as they don't feel they can make a difference, or none of the leaders speak to them or for them, or they just don't understand politics and so do not participate," says Scott Newth.

"The chorus "Apathy is easy, Our numbers are growing, All we have to do is sit and wait" sums up the futility of the situation.  That the apathetic have the numbers to make a change, but just don't due to their own apathy. It's a catch 22." WEBSITE, FACEBOOK.

The vocals almost plead for your attention on 'Apathy Is Easy' whilst the indie rock swirls around with intensity and builds into a landscape of potent rock & roll. 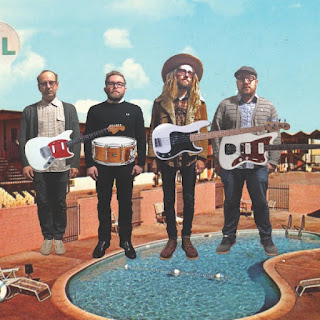 Background - Thomas Andrew is one of those humans who is pretty humble about his shenanigans but it’s fair to say that, in addition to bringing the indie-pop fans of Portland, Oregon, closer together by taking over the turntables every week at the Toffee Club Sunday brunch and doing a radio show on Freeform Radio, he has put together a band that is keeping the fuzzy, jangly indie-pop flame circa 1991 (think Slumberland and Sarah Records) alive in 2017.

It is not wrong to say that Andrew is the bandleader of A Certain Smile, which has existed in a way since 2002, when he and his best friend Tom Fleischer were in a shoegaze band called Ports of Call. Some of the songs on Fits & Starts, the brand-new debut album from A Certain Smile, date back to their college years (2002). Andrew and Fleischer spent some post-college time in Philly where many of these songs originated, and Andrew moved to Portland three years ago when his then-wife took a job there.

“It’s called Fits & Starts because that’s how it came together,” says Andrew. “I wrote most of the songs or the initial parts. A lot of songs on there have been bouncing around for a long while.” The record features songs that had plenty of time to percolate, and that’s a good and rare thing these days. Fleischer is no longer in the band, but he co-wrote such tracks as “Smile,” “Summer Blonde,” and “We Want the World.”

Andrew has been playing in bands since he was 16. He may be the primary songwriter, but on A Certain Smile’s Bandcamp page, he credits at least nine people with helping him write the nine tracks on the debut. Even though A Certain Smile had existed in some form since 2002, it didn’t become a real band until 2015, when he recruited Zach Selley, Dustin White and Andy Disney. WEBSITE.

Loud and straight to the point 'Mexican Coke' blast along with vibrant guitars and an urgent beat, whilst the vocals are a little more measured as they soar above.