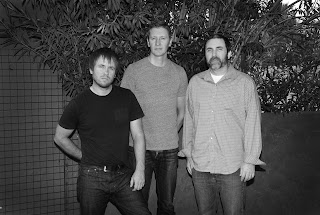 Background - Fine China was formed in Phoenix in 1997. Soon after, they released their rst 2 EP's and a 7" on So Cal indie label Velvet Blue Music. The band went on to tour extensively and to release 3 additional full length records on various labels until 2005. The most recent release, The Jaws of Life, received wide critical nods, and TV show placements.

In December of 2016 Jaws was re-issued on 12" vinyl with a newly recorded bonus track (to coincide with a 10 year reunion show). Fine China has always been a guitar-driven, pop band at heart, and the new track did not disappoint. It was met with lots of applause and the vinyl quickly sold out.

Now twelve years after their last album, Fine China is back home with a full length recording for Velvet Blue Music, exactly twenty years after their rst recordings for the same label ! This new batch of songs was recorded in songwriter Rob Withem's studio over the past year, and were mixed by Bob Hoag, the band's longtime producer and engineer, at Flying Blanket Recording in Mesa, AZ. The new full length, entitled Not Thrilled, is set for release on 2/23/18 and will contain 10 new new tracks, preceded by a 7" single, You Are Not The Future, out January 19th with an additional 2 bonus tracks. LABEL.

A refreshing fast flowing and refined rocker where the music and vocals both drive the melody and feeling. 'Not Thrilled' is a high quality piece that bodes very well for next months album. 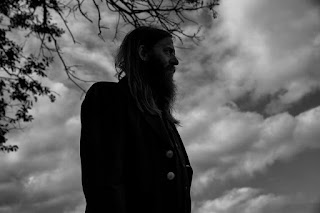 "Old songs played again" someone said, and that’s what Torgeir Waldemar is doing on Jamais Vu, where he pulls apart tracks from his previous two albums and breathes new life into them. songs. Both his self-titled 2014 debut album and the sequel, No Offending Borders, were praised by national and international press, and the songs soon started to live their own life. Especially for Torgeir Waldemar himself, who continuously played different versions of the songs live, in his rehearsal space and finally in the studio.

‘Jamais vu’ is a lesser known notion than ‘déjà vu’, and its meaning is quite simply the opposite. Where ‘déjà vu’ is a new experience that feels well-known, ‘jamais vu' means that a well-known situation or experience feels unknown or new. "Songs never stand still, at least not for me. They want to go on. After some years of playing them live, many have moved far away from where their starting point was. That’s why I often experience Jamais Vu and that’s how this release was born." says Waldemar.

On Jamais Vu you’ll hear Sylvia (Southern People), Among The Low and Summer In Toulouse from Torgeir’s latest album, No Offending Borders, in acoustic versions, and Streets and Take Me Home from his self-titled 2014 debut album in electric versions with larger arrangements. You’ve heard the songs before, but you have never heard them like this, WEBSITE, FACEBOOK.

We featured Torgeir a couple of times just over a year ago and spoke favourably of his varied music on both occasions. 'Streets' is an expansive and natural rock song with something of a timeless feel to it, the emotion and passion is felt both musically and through his classic rock vocals. 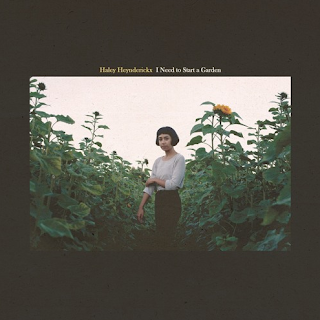 Background - Haley Heynderickx’s debut album has been long awaited in her home of Portland. Since the release of the first single, “Oom Sha La La", in 2017 she has been making waves and garnering best of and most anticipated lists from Uproxx, BIRP, NBHAP, Clunk Magazine, Various Small Flames and The Bluegrass Situation while also receiving a coveted spot on NPR’s ‘Slingshot’ program. In their best tracks of 2017 OPB Music called “Oom Sha La La” “easily one of the year’s most striking songs” while Uproxx predicted that “though this may not be a name that rings a bell at the end of 2017, it’s going to be one of those ones that you’ll hear everywhere in 2018.”

Heynderickx’s second single, “Untitled God Song”, is an entrancing rumination on spirituality, focusing on the idea that perhaps there is no separation between the mundane and the cosmic, or the divine. As Heynderickx says "Growing up with a religious background, I always grappled with the idea of what God looked like. I mean this in a humorous sense. The older I get, the more convinced I am that God is just a busy mother trying to balance all the chaos around her, and I have no idea why but I do love this imagery. Maybe it's an allusion to my own mother, but please don't tell her that, she'll probably feel shy about these lyrics."

Heynderickx uses her songwriting as therapy, a sort of mandorla to bridge the gap between -- whether it be between her mixed Filipino and American roots, or the dichotomy of her soft spoken nature and her vocal power. I Need to Start a Garden is full of pure bursts of humanity, in all their beauty and all their rawness, documenting anxiety, pain and conversely healing, community and creation. I Need to Start a Garden, will be released March 2nd, 2018 via Mama Bird Recording Co.
FACEBOOK.

'Untitled God Song' opens with a simple guitar arrangement that is soon joined by Haley Heynderickx’s breathe taking vocals. The music ups a level along the way whilst her vocals continue to impress as the hooks gently dig right in. 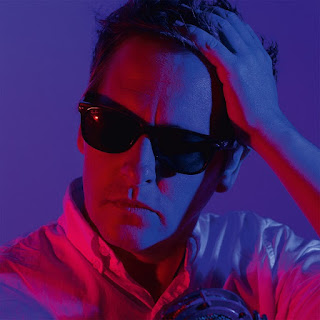 Background - Singer-songwriter Josh Rouse will release his new album Love in the Modern Age on April 13, 2018 via Yep Roc Records.

Similar to his work on his album 1972 where he captured the aesthetics of a specific moment in time, Josh’s new album Love In The Modern Age takes inspiration from the sound and production of early 1980's releases by The Blue Nile, The Style Council and Prefab Sprout.

Josh Rouse has solidified his status as one of his generation's most acclaimed songwriters in both the US and Europe, where he's lived on and off since 2004. Spending the better part of a year touring behind his critically acclaimed eleventh album, The Embers of Time, Rouse was ready for a change. "Coming off such a heavy record, I wanted to try something different," he explains. "I wanted to explore new sounds and write with a fresh backdrop." Trading in his trusty acoustic guitar for a synthesizer, Love in the Modern Age still bears Rouse's distinct fingerprints even as it pushes his limits and forges a bold new chapter more than twenty years into his celebrated career. WEBSITE, FACEBOOK.

Josh Rouse will kick off his tour in the UK in April, followed by North America in May.

Some much welcome new material from Josh Rouse and the song 'Businessman' ahead of April's album release 'Love In The Modern Age'. Influences there may be, however if they help generate a fabulous sounding song like this, so what. 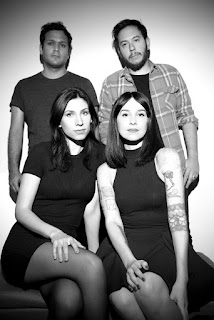 Background - The sophomore EP "Weak" by Austin TX based dream pop / shoegaze quartet will be released next Friday January 26th. The album will be available digitally and cassette via the band's Bandcamp page.

Blushing is comprised of two husband and wife pairs that originated in the summer of 2015 when Michelle shared a few songs with long time friend Christina that she had been writing on guitar. A friendship quickly became a musical partnership as Christina, a classically trained vocalist, picked up a bass and together they evolved those rough songs into fully formed compositions. They then enlisted the talents of their spouses, Jake on drums, Noe on lead guitar and shortly after self-released their debut EP "Tether" in January of 2017.

Energized by positive reception, a growing fan base and a grip of new songs they headed back into the studio as soon as possible. They recorded their follow-up EP “Weak” at Bad Wolf Recordings in Austin, TX. The album encompasses influences from all of the bands they collectively share a deep affection for such as Lush, Cocteau Twins, The Sundays, etc. BANDCAMP, FACEBOOK.

We featured the song 'Weak' back in November and are more than happy to share another track from the new 'Weak' EP called 'Hidden Places'. Shoegaze of sorts with just a little dream pop feeling through the enticing vocals, the song is powerful however the arrangement is subtle allowing each element to have clarity and distinction. 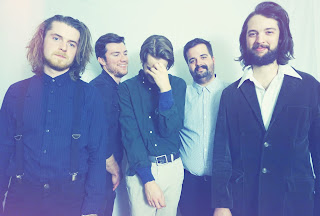 Background from Oh Geronimo - We just dropped another single/video from our forthcoming new album The Sled. “Mountains”.

“Mountains” is a song about wholeheartedly pursuing your passions, while straddling the fragile line between ambition and humility. Everybody wants to be successful, and sometimes we go to great lengths to achieve the success that we so desperately desire. However, it’s important to remember to keep our egos in check. We must be kind to each other and to ourselves. It’s easy to let your goals and aspirations consume you to the point where it brings you and everyone else around you down. “Mountains” is about never giving up, whilst withstanding the pressure to compromise who we are in order to be successful.

The Sled will be released in just a little over one month, and we can’t wait for you to hear it. We recorded it during the spring at Chalet – a wonderful, cottage-like studio, just outside of Uxbridge, ON. The release of this record will mark one year since half of our band put down their torches – a year that demanded patience, persistence, and resilience. The universe often taunts us to throw in the towel, but we’re fighters. We will never extinguish the fire, and The Sled solidifies that resolution. WEBSITE, FACEBOOK.

Second time around for Oh Geronimo this time we have 'Mountains', and once again it's an impressive indie rock song, where the vocals are a focal point for the track, until the band finally break through and impress with some superbly tight and gorgeous musicianship. 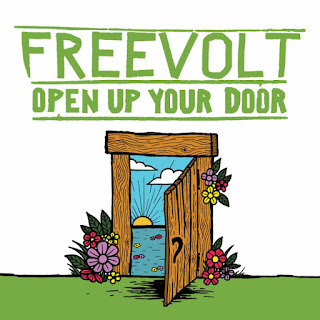 Background - Freevolt is a tropical rock act that fuses the genres of roots, reggae, jam, funk, americana, and pop to create a dynamic and high energy performance that is extremely engaging.  Based out of the North Shore of MA, the band takes their live show up and down the east coast of the USA.

The band is recognized for their high energy performance, dynamic changes, tight grooves, positive messages, and passionate vocals. Their seamless genre fusing style and prominent words of triumph and freedom are captivating audiences.
​
The band is currently on tour and taking to the stage at night clubs, concert halls, and festivals in the USA with the majority of their showcases in MA, NH, ME, RI, VT, CT, NY, PA, MD, and SC.

Freevolt released their third full length album, titled Open Up Your Door, in January 2018, as a follow up to their largely successful 2016 release, Once You Say . Various tracks from the new album have since been featured on radio and television worldwide. WEBSITE, FACEBOOK.

If you need some upbeat feel good music that is delivered both vocally and from a band that at times are musically on fire then 'Always Feel So Good' is a taster for all of that and more. Party time!