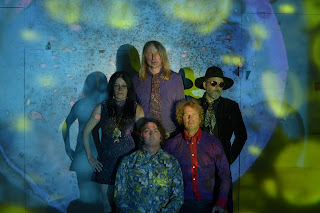 Background - In this click bait, flavor of the month, short attention span world, The Loons are an anomaly. Their records and live performances have commanded the attention of a devoted tribe of fans for twenty years and counting. In that time they’ve made four albums, a bunch of singles, and played gigs in more cities around the world than they can keep count of. They’ve collaborated with original ‘60s music icons like Glenn Ross Campbell of the Misunderstood, Dick Taylor of the Pretty Things, Randy Holden of the Sons of Adam and Blue Cheer, and Michael Stuart-Ware of Love. The Loons have grown and evolved but never compromised, remaining fiercely committed to the untamed spirit and creativity of ‘60s garage, freakbeat and psychedelia.

After fifteen years with the same lineup, they have a musical chemistry that is practically telepathic. Mike Stax, who also publishes Ugly Things magazine, is the lead singer.  Anja Stax plays bass and sings backing vocals. Marc Schroeder and Chris Marsteller play guitars. Mike Kamoo is the drummer and producer.

Mike Stax was already a veteran of several other San Diego bands, including the Crawdaddys and the Tell-Tale Hearts, when he first formed the Loons in 1997. Ebbot Lundberg of the Soundtrack of Our Lives produced the group’s debut album, Love’s Dead Leaves, released by Get Hip Records in 1998. Anja joined on bass after relocating to California from London, where she’d been playing with the Diaboliks, and the rest of the lineup clicked into place soon afterwards.

The Paraphernalia album was released in 2004, followed by Red Dissolving Rays of Light in 2010, which included two tracks with Glenn Campbell of the Misunderstood on steel guitar, and Inside Out Your Mind in 2015. All were recorded at Kamoo’s Earthling Studios in El Cajon, which is outfitted with some of the finest vintage analogue recording gear known to man, including the original eight-track machine from Sunset Sound used to record landmark records by Love, the Buffalo Springfield, the Doors, Clear Light, and Captain Beefheart & the Magic Band.

The Loons catalog is anthologized on an exclusive cassette compilation, Diamonds, Garbage & Gold: The Best of the Loons, released on Burger Records in November 2017. Their song As the Raven Flies can be heard in the recent movie Dances With Werewolves, directed by Donald Glut and Dan Golden. They will be touring in Spain and Italy in March and April of 2018.

The Loons new single, Blue Ether b/w Saturday’s Son, is due for release on Dirty Water Records in March 2018.The A-side is a driving, psychedelic-infused number designed, like all Loons songs, to move your mind as well as your feet. The title and lyrics refer to the elusive, mystical realm where all creative inspiration resides, somewhere between the conscious and unconscious mind. “Saturday’s Son,” originally recorded by the Sons of Adam, has been in the Loons’ live set for years, and having reshaped it, they felt it was time to commit it to vinyl. FACEBOOK.

We have both sides of the forthcoming vinyl single to enjoy, 'Blue Ether' and 'Saturday's Son' are psychedelically gorgeous. Timeless, this could be pure sixties psychedelic glory, the quality of production tells us it's more modern, whatever, it's a feast of sonic delight, enjoy! 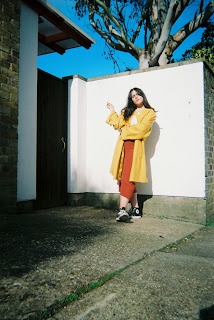 Malena Zavala - Could You Stay.

Background - Last year’s singles ‘Should I Try’ and ‘If It Goes’ showcased Malena Zavala’s inventive new sound. Fusing Latin rhythms with her dulcet vocals, they announced a vital new voice unshackled from the conventions of indie rock. The Argentine born London raised artist, producer and filmmaker is now set to release debut album ‘Aliso’ and new cut ‘Could You Stay’ adds new layers to her exuberant artistry which has already been championed by LOBF, Wonderland, Nylon and much more.

Born into a family of creatives, Malena draws inspiration from the women in her family and small town in the north of Argentina; from the strong Latino character of her Mother honoured in If It Goes, to her maverick Grandmother who in particular encourages a free-thinking approach.

"Every person in my family is truly unique to me and I draw inspiration from different parts of their life and ideology. I'm really lucky to have people around me that let me be me"

Malena was in a band with her brother for five years before he took an opportunity to move to California, a life dream of his. Whilst in the UK, he was a strong musical influence as an older sibling, and would educate her in his music taste, instrumentation technique, songwriting and recording styles. Losing her mentor, although hard at first, was a vital step for her to step out of the shadows. She holed herself up in his house in Aliso Viejo, California and in a surge of energy and desire to prove herself, wrote most of her first LP in a couple of weeks - within 6 months she had recorded, produced, mixed* (with Gareth Jones*), completed all the art, visuals and videos.

"It's really satisfying to find a way to express yourself and get things off your chest that have been there for years, I’m really glad I found it and kinda surprised as well. I'm finally at peace." FACEBOOK.

The musical arrangement for 'Could You Stay' is seductive enough and beautifully produced. Marlena's vocals are more than capable of matching and adding to the piece, this is beautiful, simply beautiful. 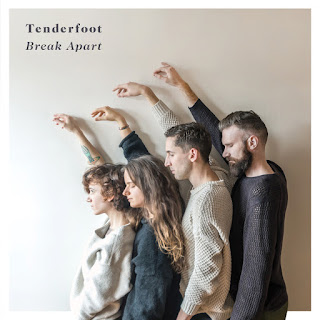 Background - Tenderfoot’s gorgeous debut album Break Apart is now out, along with its limited-edition white vinyl courtesy of Seattle’s Porchlight Records. To celebrate its release, the dreamy lo-fi folk quartet released a emotional video for the album’s title track “Break Apart” this week.

Tenderfoot will be celebrating the album’s release in each of their respective hometowns; their native Seattle (where the band was formed and where 3/4 of the band still resides), and Brooklyn, where frontman Adam Kendall Woods recently moved. The Seattle show is happening at the Sunset Tavern on February 8th, with two of their favorite local bands supporting, Cumulus and Whitney Ballen, and the Brooklyn show will be taking place on March 16th at C’mon Everybody.

Tenderfoot started out as a solo project on the highways and back roads of the US, when Woods and his partner lived on the road for a year in a vintage camper trailer towed behind a Volkswagen Rabbit pickup truck. After several months on the road, the two men found themselves feeling stranded, frightened, and falling out of love. Woods ultimately moved on, and began pouring his heart and soul into Tenderfoot’s early recordings. With an unabashedly romantic, experimental approach to songwriting and the lush dynamics of a full band, Break Apart encompasses the loss of loved ones, health scares, and strained relationships. The album is a constellation between these moments of turbulence and heartache, but with the hopeful glow of found family. WEBSITE, FACEBOOK.

The first of eight tracks on the bands debut album 'Break Apart' sets standards high & what follows is more than equal to that benchmark. Musically the band create fabulous textures and do vary the mood, whilst retaining a core vibe that is somewhere around dream pop and folk rock, and all points between.