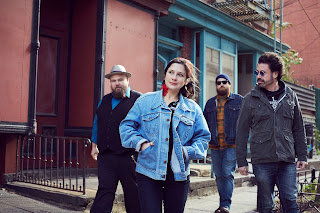 The Claudettes - Don't Stay with Me / Pull Closer To Me.

Pianist/songwriter Johnny Iguana airs grievances about the numbing and divisive effects of an Internet-dominated world all across these songs. “Nobody knows how to talk to each other these days,” begins the song “Give It All Up for Good,” while “Bill Played Saxophone” follows American political nemeses through periods of smoldering bitterness and revenge fantasies. “Death and Traffic” begs for stories of saved lives and heroism amidst the onslaught of bad news, then “Utterly Absurd” bemoans the age of the hair-trigger Google search: “Thought dies as transmission rise…‘fast and now’ killed ‘I know how.’” And need anything more be said about the prescience of “Naked on the Internet”?

Neill invited the Claudettes to his Georgia studio after being introduced to the band by Dave Cobb (Grammy-winning producer of Sturgill Simpson and Lake Street Dive). The Claudettes recorded at Soil of the South for ten days, taking advantage of Neill's vast knowledge and collection of vintage equipment.

“Mark insisted that, no matter how loudly we crank amps live, we record at conversational level so he could turn his vintage preamps up and use his best old mics,” says band leader Johnny Iguana, who has recorded with Junior Wells, Buddy Guy and a host of other blues giants along with his own punk-organ band oh my god. The result: a big, warm sound straight off the ’60s 45s that Mark spins between takes for inspiration.

The piano-guitar-drums core of each song was recorded in a single take, as were most vocals. Neill, who shuns the practice of building tracks in Pro Tools, had the band run through songs again and again until “The” take arrived. Marxophones, mellotrons, rare fuzz pedals and an array of percussion instruments were broken out to finalize Neill's vision for each track.

Here the Claudettes introduce the singer who’s been touring with the band for two years: Berit Ulseth. “Berit went to the New School in NY for jazz vocals, but she’s got a tone you can’t learn,” says Iguana. “Sometimes she reminds me of Carole King and her soulful ‘I Feel the Earth Move’ vocals…but she’s also got this Patsy Cline warmth and lushness to her voice.”

Ulseth urges a lackluster partner to set her free in “Don’t Stay With Me,” propelled by an insistent orchestral bass drum, then reveals the exquisite nuances of her voice on the transfixing ballad “Pull Closer to Me.” Bassist/guitarist Zach Verdoorn yodels the album’s carnival-ready title cut and takes urgent solos on “Total Misfit” and the aforementioned “Naked on the Internet,” a song that sounds like the ’60s but looks to a future where our only lasting legacies are unwanted searchable ones.

What’s traditional on Dance Scandal at the Gymnasium! are the blues, soul and rock ’n’ roll touchstones and the antique instruments and equipment used to document them. What’s new and indescribable are the punk-laced energy and sum total of these songs, musicians and producer Neill, who describes this album thusly: “Haunted cabaret...David Lynch movie music crossed with Allen Toussaint’s driving piano sound! And sort of like when you’re driving late at night in the South and two radio stations are coming in together and it’s perfect!...Like Otis Spann and Mark Sandman from Morphine sitting in with Keely Smith. I'm kind of riffing here but seriously nobody sounds like them...I love this new record, it’s crazy good." WEBSITE, BANDCAMP.

We have two of the twelve songs that make up The Claudettes forthcoming album 'Dance Scandal at the Gymnasium!'. 'Don't Stay with Me' and 'Pull Closer To Me' give the listener some idea of what's in store on the album, the emphasis being on "some idea." The band have a delightfully unique musical sound, the vocals add melody and plenty of feeling to the songs, whilst the bands creative zest ensures each track has some unique attributes, alongside varying levels of energy and attitude. Collectively this works, the musical hooks are everywhere. Not being certain of what each piece might bring, adds to the excitement, this really is an album worth some time digging in to. 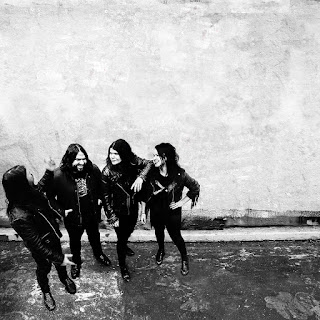 Background - I never wanted to be a part of anything, the cool kids at school, the pretend outlaws. I was always an outsider, we’ve always been an outsider band. We don’t fit in, never have and never will. Especially now. As you get older you realise your strength in not giving a f. You realise what you’ve been trying to do your whole life. Create something that’s yours, your own world, your own views, make something special, start your own gang but always be You within it. Don’t conform. Don’t fall in line. Be free. Be inspired. Inspire. Live & Love. To all the Outsiders – Romeo, The Magic Numbers.

Mercury Prize nominated and multi-platinum selling London quartet The Magic Numbers have just shared the studio-shot video for the recent 6 Music-supported single, 'Sweet Divide'. This is the first piece of new music from the band following a three-year hiatus and taken from their forthcoming album 'Outsiders', available through Role Play Records on May 11, 2018. Outsiders captures The Magic Numbers fired by a renewed sense of purpose, immediately apparent on first single ‘Sweet Divide’, with the band’s melodic facility bolstered by a newfound, grittier sensibility. Watch here. In support of the Outsiders, the band will commence a headline tour of the UK through May - dates below.

Comprising of two sets of siblings, Romeo and Michele Stodart and Angela and Sean Gannon, The Magic Numbers have sold over a million albums worldwide across their career and scored a slew of hit singles. The band quickly shot to media attention after selling out London’s Kentish Town Forum solely on the strength of their loyal fanbase prior to the release of their 2005 self-titled debut - an album that would later go on to pick up a Mercury Music Prize nomination and break into the UK Top 10 Charts.

Hit singles – including ‘Forever Lost’, ‘Love Me Like You’, ‘Love’s A Game’ and ‘Take A Chance’ – and three hit albums followed. Alongside the band’s success, the Stodart’s have lent a hand to projects including releases from Jane Birkin, Spiritualized, Chemical Brothers, Kathryn Williams and Ed Harcourt, plus Damon Albarn’s Africa Express, with Michele Stodart releasing two solo albums to date, duetting with Conor O’Brien of Villagers along the way. FACEBOOK.

It's been a while since I last listened to The Magic Numbers and the latest song will have me digging out their debut album which was a real favourite of mine at the time. 'Sweet Divide' is a driving rocker from the opening moments, the guitars are powerful, the vocals and harmonies add even more rock swagger, this is one very addictive "play me again" track, and some! 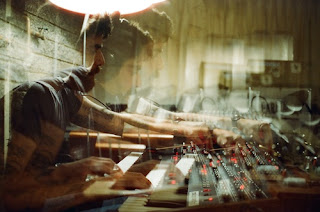 The Goldberg Sisters - When Or Where Or Why.

Background - On May 4th psych-pop artist The Goldberg Sisters will release their new album HOME: A Nice Place To Visit. Known as the musical alter-ego of actor, musician, filmmaker and photographer Adam Goldberg, (and his mythical sister-twin "Celeste") The Goldberg Sisters have shared a new song "Where Or When Or Why."

Movie audiences got to know Goldberg from his performances in films such as Dazed and Confused, Saving Private Ryan, The Hebrew Hammer, A Beautiful Mind, and 2 Days in Paris as well as from equally memorable appearances in TV shows like Friends, Entourage and Fargo. Music fans, however, haven’t always found him so easy to pin down. This year they‘ll have his brilliant new album, HOME: A Nice Place To Visit.

Goldberg recorded the 2009 dream-pop album Eros and Omissions over a six-year period with a variety of musicians, including Steven Drozd of The Flaming Lips. But the pace quickened on the first two albums issued under the Goldberg Sisters moniker, 2011’s self-titled offering and Stranger’s Morning from 2013, on which Goldberg played all the instruments and which was recorded by engineer and longtime collaborator, multi-instrumentalist and singer-songwriter Andrew Lynch (Nav/Attack) in Goldberg’s garage.

Goldberg and Lynch teamed up once again in the garage for the new Goldberg Sisters’ album, HOME: A Nice Place To Visit. Goldberg again did all the instrumentation save for violins and trumpet. Goldberg’s elasticity as a multi-instrumentalist and producer is nothing short of astonishing considering he lacks anything in the way of formal training and didn’t even think of seriously making music until his early 20s. “I started playing drums as a kid,” he recalls. “I played along with songs on the radio but mainly Bowie records.” WEBSITE, TWITTER.

Psych pop is the description and psych pop it is! 'When Or Where Or Why' has an energetic, upbeat musical backdrop, the piano is delightful and the vocals ensure the song stands out, adding melodic hooks and extra vibrancy. 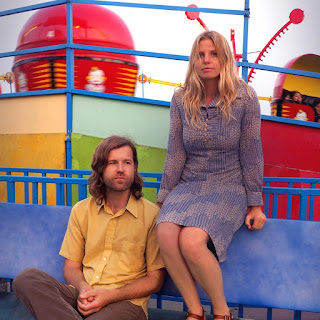 Background - Sugar Candy Mountain shares the first track and video for "Split in Two" off their upcoming album. "Split in Two" was produced by Jason Quever of Papercuts and the video was directed by TG Eaton. Do Right is due May 4 on PIAPTK Records.

Part travelogue, part response to the current, turbulent climate, Do Right gives voice to the deeply nested anxiety of modern times attempting to offer a balm.  Nature it seems, is where the band often goes to calibrate it’s moral compass so frequently upended by the daily news-cycle.  Sugar Candy Mountain invites you to join them on this journey singing “There’s a quiet place I go when I need to find my way/ There’s a quiet place inside/ Come on in just knock and a door will open”.

Musically, the band remains rooted in 60’s and 70’s rock, with their signature honey sweet vocals. Do Right leans more heavily on synthesizer than the band’s previous records lending the album a more modern feel.  The album pairs the ephemeral orchestral arrangements of The Beach Boys with the pop sensibility of George Harrison on “All Things Must Pass”.

Oscillating between the hazy psychedelic pop of Mild High Club, the driving energy of Dungen and the danceable familiarity of The Supremes, Do Right is a perfect cocktail of old and new, imploring the listener to take a ride into the sunset with Sugar Candy Mountain. WEBSITE, FACEBOOK.

Atmospheric and yet sprightly 'Split In Two' has dreamy melodic vocals and a soundtrack that adds some swirling vibes, for want of a better expression. It's catchy and imaginative, which is a pretty good combination to start off from.