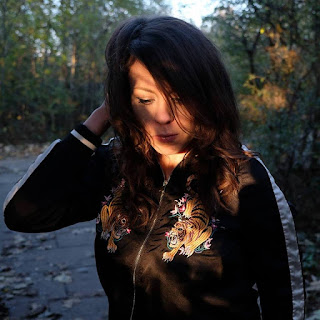 The video, filmed and edited by Luna, was shot around Hastings after a nasty flu sent her looking for fresh air, and so she decamped to stay with family on the English south coast. The video is a dream-like postcard of seaside Britain – kitsch, nostalgic, but also hinting at economic depression. The track is a response to the way in which “Britannia rules the waves” has been mythologised, and the damage that imperalism continues to contribute to our global society.

Luna Neptune is a Scottish psych folk solo artist, based in Clapton, East London. Comparisons have been made to Jesca Hoop, Grace Slick and Sandy Denny of Fairport Convention.

The mixture of modern music techniques is beautifully juxtaposed with classic folk vocals on  'Elspeth and Elijah' a fabulous psych folk exploration, where the atmosphere gradually builds and the story unfolds. This is a very impressive song. 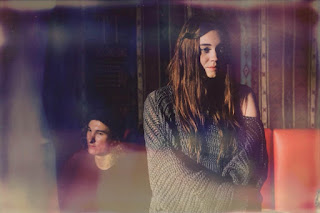 Background -  Paper Hawk have just released the new single ‘Trails’ from upcoming EP. Crafting an intimate, ethereal sound, inviting you into their private world, Paper Hawk’s debut EP The Tide is set for release on the 2nd May 2018 through Brighton’s boutique record label Folklore Sessions. The 4-track record signals the beginning of a new adventure for this emerging band. Alongside digital distribution on iTunes and Spotify, a limited run of 50 physical copies will be available on the release date. Each record comes with a handwritten thank you letter, additional artwork, and a signed art print. Although new to the scene, Paper Hawk have swiftly left their mark playing across the country with sets at Glastonbury, 2000 Trees, YNOT and the Alternative Escape Festival.

Recorded in the living room of their Brighton flat the record marks a cathartic release from a tumultuous few years. From the defeated notes of ‘Trails’ - a hypnotising whisper chronicling the throes of a volatile relationship - to the comforting promise of support in ‘Northern Sky’ - The Tide is a collection of songs written with a hand-on-heart approach and striking honesty.

Produced by Josh Trinnaman (the brain of jazz-IDM fusion band, Luo), the intimate guitar and vocal arrangements are brought to life with rich soundscapes and electronic ambience, creating a dream-like atmosphere that draws you in and keeps you captivated.

Paper Hawk is an alt-folk duo currently based in Brighton, who combine intricate guitar driven melodies with hushed tones and raw confessional lyrics. A collaboration of two songwriters, Rebecca Brandler and Scott Booth, the project began after the two met a few months after both moving to Brighton to study. Rebecca heard Scott playing a cover of ‘Ocean’ by John Butler and instant musical sparks were ignited and she knew she wanted to write music together. The bond was then nurtured in a cold basement flat with muted rehearsals to avoid complaints from the neighbours but has proven to pay off, being nourished into a harrowingly beautiful EP with layers that muster unique strength, blanketed with velvet vocals. TWITTER.

'Trails' is a richly textured song, where the musical layers ebb and flow beneath some beguiling vocals. The hash-tag states Alt folk, which is as good a description as any other that comes to mind, the track builds both in emotional feel and potency, the EP follows soon. 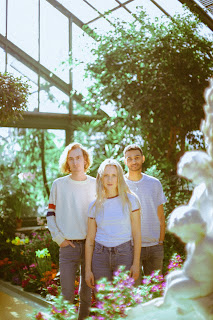 The Bae Beach Club - All Day.

Background - St. Catharines, Ontario's The Bae Beach Club is an indie rock group playing songs about daydreaming, the sun, and love. Their ultra-smooth guitar licks and catchy bass lines are sure to provide a quick escape route to an intrinsic beachy dreamland.

The band traveled by train from Toronto, ON to Vancouver, BC to record their soon to be released 'Our Escape' EP at Monarch Studios with Tom Dobrzanski, performing as "Artists on Board" the VIA Rail Canada

Vocalist KiKi Kinaschuk says, "This tune sets the tone for the upcoming EP, Our Escape. ‘all day’ unveils an honest expression of creating your ideal situation introspectively. Ultimately, it invokes a feeling of restlessness when regrouping back to reality.” 'Our Escape' EP will be released on May 18. BANDCAMP.

From the opening notes of 'All Day' expectations are set high and the song really does fulfill it's promise. Melodic indie rock and sumptuous vocals are delivered with an easy beat, and the hooks are everywhere on this sun drenched tune. 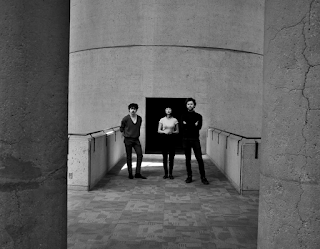 Background - Second Still are back and set to release their second EP Equals on April 20th, 2018 on vinyl via Belgian label Weyrd Son Records, and on cassette through the new tape label Sentimental Records.

After their first full-length record was named “best post-punk debut LP of 2017” by Post-Punk.com, While the songs from this newest release retain the sheer power and intensity of the band’s previous two releases, Equals sees Second Still evolving their sound and progressing forward into sonically uncharted territory. The four main components of the band’s signature sound are still there –chorus and delay-heavy guitar, hypnotic bass grooves, heavyweight drum machine beats, and hauntingly beautiful vocal melodies– but they have added a couple analog synthesizers into the arsenal for Equals, mixing a whole new element into their already uniquely realized style of post-punk. Commanding synth bass, subtle ambient soundscapes, and forceful lead synth hooks now supplement and enhance the distinctive sound that Second Still had already crafted on their first two releases.

The band also explores a more pop-orientated and lighter sound on Equals, especially on the A-side, while the B-side stays true to the band’s more melancholic and gloomy roots. The EP kicks off with “In Order”, an upbeat and throbbing dance-floor anthem with a pulsating arpeggiated synth line driving the song forward. Following that is “Ashes”, a six-minute pop ballad who’s feeling is constantly shifting, at times being tastefully reserved and atmospheric, while at others totally unleashed and unhinged. The B-side offers a nice contrast to the pop sensibilities of side A, with three unrelenting back to back tracks of aggressive and forceful coldwave outpourings.

The EP also has a sixth bonus track titled “Walls”, that is included in the digital and cassette versions of the album, and as a limited edition flexi disc to be given away with the first 100 vinyl purchases. Equals was written over a period of six months, and recorded in various rehearsal spaces and makeshift studios around Los Angeles. Chris King is credited with recording, mixing, and co-producing the EP, and Mike Tierney with the mastering. Jean Lorenzo, a NYC-based graphic designer, created the album artwork, which features a front cover with a die cut design, allowing for select sections of record’s insert to be visible through the openings. FACEBOOK.

Less than a week since our last feature and Second Still are back with yet another single. 'In Order' is the first track on their second EP and continues the bands momentum of turning out powerfully engaging post punk music.