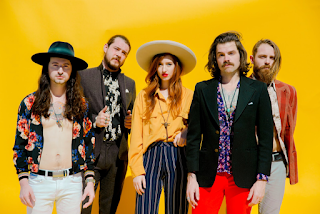 Background - Chickasaw Fields," is the rollicking new single from The Underhill Family Orchestra, that details the strength of working together, compassion, compromise, and relational promise.

Inspired by Johnny Cash and June Carter- esque call-and-response style tracks, the song takes the sweetness that Johnny and June shared onstage and rubs a little reality and grit into it. "Chickasaw Fields" is from the band's debut LP, Tell Me That You Love Me, set for release on May 4th via Skate Mountain Records. The single is the second from the record and follows "When The Trumpet Sounds."

The Underhill Family Orchestra is currently on tour taking their energetic live performance to stages across the land, and will appear at SouthSounds Music Festival this weekend in their hometown of Mobile, Alabama. WEBSITE.

Some gorgeous roots flavoured vibes are apparent from the opening moments of 'Chickasaw Fields' before it develops into a full on Alt rock meets Americana affair. The mixed vocals and harmonies are sublime, the band create a feisty backdrop, this really is "more please" music. 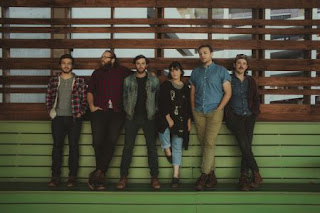 Background - Hailing from the musical mecca of Athens, Georgia and built on the idea that the sum is greater than the individual parts, Family And Friends has steadily gained a loyal following with their spirited live performances and “good music, good people” mantra since releasing their 2015 EP XOXO.

Their new highly anticipated album Felix Culpa, produced by Chicago-turned- L.A. auteur Brad Wood and due out June 8th, is nothing less than an epic coming-of-age tale with a massive sound that amplifies their former indie-folk roots onto a technicolor, Cinemascope screen.

The forthcoming album title, which loosely translates to “blessed mistake," illustrates the notion that while we may continue to search for some semblance of meaning, the fact that we are here at all deserves to be celebrated, and Family And Friends intends to do just that.

Felix Culpa focuses on a precipice of life’s journey, as we begin the quest for existential meaning and come to terms with the fact that people, relationships, and seemingly universal truths are more complicated than we perhaps realize. Balancing scintillating textures with bright guitars and beautiful vocal harmonies, Family And Friends’ sharply observant lyrics are cloaked in the band’s contagiously upbeat instrumentation, leaving the listener with a sense of hope by album’s end. Peaches is from the forthcoming album Felix Culpa. WEBSITE.

With a fast flowing tempo 'Peaches' launches into a mixture of melodic vocals, subtle harmonies and a musical arrangement that is distinct and tight. Collectively the band fire catchy hooks in all directions.