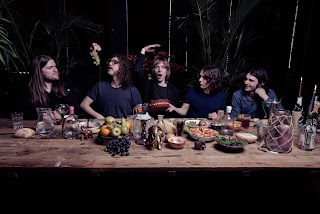 Background - Liverpool psychedelic rockers The Vryll Society announce the arrival of their latest psych-driven single Andrei Rublev, creating further anticipation ahead of the release of their debut album this summer. Inspired by scenes from Andre Tarkovsky’s 1996 arthouse classic film, Andrei Rublev is an emotive charge of hip-hop drums, crunching bass lines and hypnotic guitar solos, hinting further at the themes and ideas likely to form the basis of their upcoming record.

Having produced a series of critically acclaimed singles over the last few years, including live stalwarts ‘A Perfect Rhythm’ and ‘Shadow Of A Wave’, the fast-rising Merseyside outfit are primed for their first full-length release, with impressive appearances at the likes of Glastonbury, Reading & Leeds and TRNSMT helping them develop a staunch grassroots following.

Extensive support from BBC Introducing has arrived in the form of slots at their SXSW and Glastonbury showcases alongside a Maida Vale live session over the past 18 months, whilst widespread acclaim from Huw Stephens (BBC Radio 1), Phil Taggart (BBC Radio 1) and Steve Lamacq (BBC 6 Music) has seen the spotlight on the psych-pop quintet intensify, leading to supports with Blossoms, The Coral and The Kooks.

'Andrei Rublev' is a melodic psych rocker that within just a couple of days is already getting considerable attention. That's not surprising, the bands musicianship is gorgeous and incredibly easy to become immersed within, add the fabulous vocals that are just so right for this genre, and we arrive with a song that really is very special. 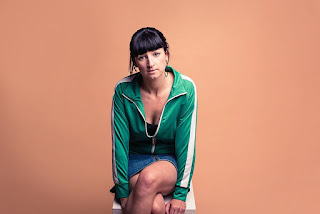 Background - Melbourne’s BATTS  releases her new single ‘Shame’ the first music to arrive from the Radio 1 and Radio X-supported artist this year, following 2017’s well-received ’62 Moons’ EP. BATTS (aka Tanya Batt) has also announced a string of London dates including a headline show at Notting Hill Arts Club on May 6 as part of Communion Presents - full list of dates below, including shows in support of Cub Sport. ‘Shame’ is streaming here.

Though the Britpop-tinged insouciance of ‘Shame’ marks a musical departure from the more ambient sounds of ’62 Moons’, it further mines BATTS’ deep interest in all things related to space. ’62 Moons’ itself was informed by NASA’s release of previously unheard sounds recorded in outer space, whilst ‘Shame’ now dryly imagines a failed human attempt to colonise another planet, “Maybe Saturn, Jupiter or Mars / Where Bowie watches us from the stars”.

Lyrically, the song is about BATTS' view of the world and the idea that humans continue to think if they were to colonise a different planet – Mars – it would turn out any different. Also, the song is about wanting to see more acceptance and positive change.

Alongside the release of ’62 Moons’ - which secured airplay across Radio 1, KCRW, Radio X and Triple J  - 2017 also saw BATTS sign to THAA Records and tour alongside the likes of Timberwolf, nyck and The Teskey Brothers. Alongside ‘Shame’, BATTS will release further new music throughout 2018, ahead of a debut album due in 2019. WEBSITE.

If you like your rock to be powerful and yet refined then 'Shame' is all of that and more. Tanya Batt's vocals are distinct and pleasing, the music simmers with the potential to explode, however it's restraint adds a level of potency, this is one of those songs that is hard to ignore, and even harder not to play again...