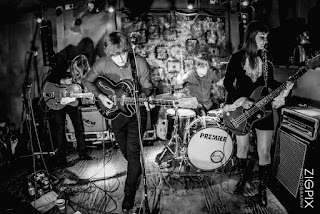 Background - Introducing the debut album "Music For Children" from The Jack Cades–a “supergroup” of sorts hailing from the UK. Specializing in 60’s era garage/psych/rhythm & blues, with a gob of snotty punk thrown in for good measure, the band kicked things off in late 2017 when lead guitarist/vocalist Mike Whittaker and his wife, rhythm guitarist/vocalist Elsa Whittaker, decided to record some tracks at Matthew “Mole” Lambert‘s notorious State Records Studios in Folkestone, Kent.

With Mike, Elsa and Mole already veterans of numerous projects like Thee Vicars, The Baron Four, The Missing Souls, and The Embrooks–to name a just few–these early recording sessions seemed loaded with heaps of promise. The band invited bassist John Gibbs (The Masonics, The Wildebeests) to participate, and with Mole on drums, the quartet laid down the tracks that would become their debut mini-LP Music For Children, due out this coming May 18th on Dirty Water Records. While the group’s busy musical schedules initially made it hard to imagine they would have time for this new venture, their work together sounded too good to shelve, and Dirty Water Records reports they have since added bassist Alexandra of Speedball JR to their ranks.

"Music For Children" finds the band showing off their vintage garage sound; but it’s also laced with that kind of rambunctious punk edge that will stop you dead in your tracks. Must be something in the water, or that ocean air, but the recordings coming out of Lambert’s State Records Studios sound like a time capsule straight from the mid-60’s–and this Music For Children cut is no exception. Shambolic and raw in the best of ways, the guitar interplay here between the Whittakers makes for that kind of wild ride that always sounds like it might jump the tracks in a fiery crash. With Mole’s galloping drumming helping to set a frenetic pace, and shout-along choruses from the group threatening to break the mics, “Music For Children" is an infectious introduction to The Jack Cades sure to have you coming back for another fix. FACEBOOK.

Those sixties garage rock vibes are there from the opening moments of the first track 'Big Fish' as The Jack Cades embark on a glorious selection of songs that make up 'Music For Children'. It's an album where new music creates instant memories of times gone by, raw energy meets the odd hint of punk attitude and the bands vibrancy is addictive and just feels so good. 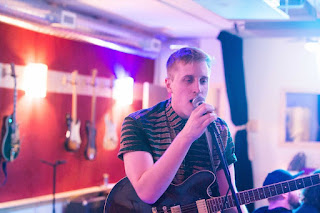 Background from Mike Legere - When I’m not playing with bands like Century Thief and Places Erupt, I tend to write lyrically surreal indie-folk. I’ve been lucky enough to tour Ontario, Quebec and Eastern Canada, while recording/producing several records.

“Yourself” is the first single off my debut solo album, Ourselves in Public, set for release on June 8th. It’s a song that compares our social identity to who we are when we are alone – a song that describes a resistance to the identity forged by the expectations of family, friends and strangers, and the loneliness of standing in opposition.

Ourselves in Public was recorded in a variety of spaces throughout Toronto, Montreal and Paris; several studios, apartments (some with broken windows), closets, rehearsal spaces, on an awning during a rainstorm, public squares, restaurants and subway cars. Let me know if you’d like to hear a private, advance stream before it drops next month. This month will see me embark on my first solo tour, preceding Ourselves in Public’s June 8th release. TWITTER.

'Yourself' opens with some melodic guitar that is quickly followed by Mike Legere's distinct and pleasing vocals. The song sits somewhere between indie rock and folk, with no shortage of play me again hooks! I have chosen the clean version, it's up to you if you want something, shall we say "a little stronger". 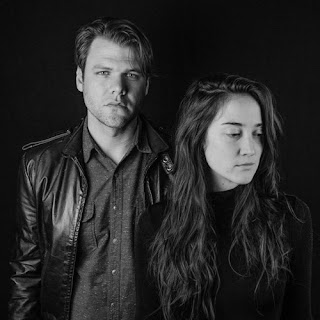 Background - Virginia-based band of brothers Sons of Bill have shared a new track, "Easier," from their forthcoming album Oh God Ma’am. "It’s a love song, and I’m so glad Molly Parden agreed to make it a duet with me. Her voice adds a haunting depth to every song she touches," writes singer/guitarist James Wilson. Reflecting on the song's inspiration, Wilson writes "there’s a strange unspoken malaise with my generation - ironic and sad... but I think it’s important to try and sing about love and hope in some genuine way now more than ever. We have to remind each other in some way that it’s going to get easier, even if we know in our heart of hearts that that may not be true."

"Easier" follows the group's lead single "Believer / Pretender," an opening salvo that encapsulates the approach the group takes on their latest record - blending their lyrical Americana roots with a polished, driving set of songs punctuated by crystalline guitar riffs and tasteful synth flourishes.

Oh God Ma'am is the followup to their 2015 album Love and Logic, which Q magazine called "a glorious sour mash of every great Americana trope of the last 50 years-- think Dylan, R.E.M, Wilco, -- Blended with top notes of Husker Du, Big Star, and The Replacements... A family affair welcoming one and all." Recorded both in Seattle with west coast indie legend Phil Ek (Shins, Fleet Foxes) and in Nashville with Sean Sullivan (Sturgill Simpson) and mixed by Peter Katis (The National, Interpol) Oh God Ma'am moves beyond the galvanic americana-rock comfort zone of previous efforts, for a more elegant and restrained sound-- a darker, and more complexly layered rock record that manages to be the band’s most emotionally intimate and sonically expansive. WEBSITE.

Opening with a gentle and somewhat dreamy vibe 'Easier' slowly adds some musical layers. The vocals and gorgeous harmonies are centre stage throughout, as this captivating Americana piece quickly touches the heart.