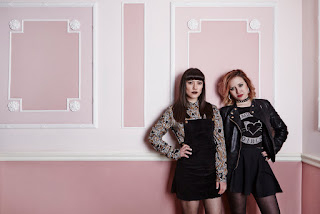 Background - Having spent the last year relentlessly gigging in and around the capital, packing out venues and being heavily championed by Radio X & BBC Introducing, Dolls have spent the summer working with Nick Cave And The Bad Seeds / Grinderman drummer Jim Sclavunos on their new “Pop The Bubble EP”.

The 2-piece, comprising Jade (guitar and vocals) and Bel (drums and vocals), can today reveal lead single “Sugar Free”.  A riotous example of their infectious grunge-punk, it’s a song on the bands views about “the use-and-throwaway society around us today, how superficial people's lives can be, and how rapidly people's values and what's on-trend can change”

Drummer Bel goes on to further explain, “It was a spontaneous song that came out of Jade's improvised guitar riff. When we were writing lyrics I had a sugar free drink and started thinking how people can get so peed off when they ask for diet coke and get regular. So it represents those kind of first world problems & concerns about how our worst nightmare could be something so shallow that it's just ridiculous”.

The “Pop The Bubble EP”, set for release in September 2018, marked the first time the band have worked with producer Jim Sclavunos whose production credits include The Horrors, The Wytches and Du Blonde. The result is 4 garage-pop anthems with as much sass as they have bite. Duel vocals bounce off each other effortlessly, capturing some of the awesome chemistry these two bring to their raucous live performances. "Pop The Bubble EP" will be released by iconic soundtrack labels Mondo/Death Waltz on a beautiful limited edition multi-coloured and etched vinyl LP and digital. The band launch the EP at Rough Trade East with an instore show on Monday 24th September.

Dolls have all the feisty flair a rock duo should have, and with their garage and punk leaning the attitude and determination is also present. So 'Sugar Free' is a two minute blast of expectation, delivered to specification, and some! 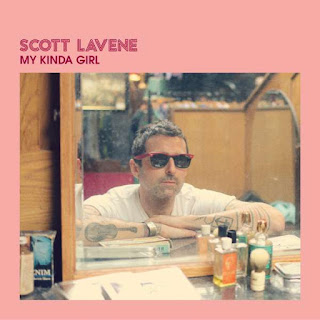 Background - Scott Lavene has released a new single, My Kinda Girl, along with a wonderfully psychedelic video featuring multiple Scott Lavene’s. The single will be out physically 27th September and supported with a 11 date UK tour including a date at The Slaughtered Lamb in London.

In Scott’s own words, “‘My Kinda Girl’ is a song about the early stages of romance when you’re noticing small quirks about each other’s personalities. You think “oh she loves pastries and jeans and so do I. We must be meant for each other.” Love is sick like that.  It’s the most honest love song I’ve ever written.”

Born in Essex, Scott Lavene was raised on power ballads, punk and swearing. In bands since his teens, Scott travelled about, scratching out a living with deadbeat jobs trying to find something to cling to. After couple of years in France and a brief stint in New York, including a playing at the infamous CBGB’s Scott returned to London and came close to a major label deal with his sordid songs.

Instead Scott disappeared on a rusty old boat, a floating shed, for five years. Hiding from the world. Broke and bemused. Solitude and lonely debauchery. After five years of this Scott went kaput, so spent some time in a house for the bewildered where he emerged full of life and songs. A self released album in a band called Big Top Heartbreak led to being signed to Funnel Music as a solo artist. WEBSITE.

For all that Scott Lavene might have been through, he comes across as gregarious and outgoing on 'My Kinda Girl' a lovable song, with just a touch of cheekiness, something the video builds on further. 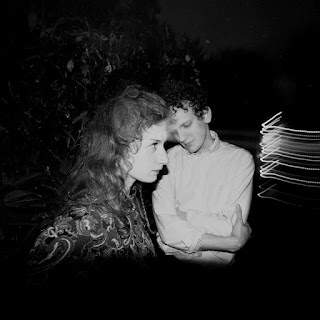 Pure Bathing Culture’s decision to cover The Blue Nile was beyond natural, nearly inevitable. Sarah Versprille and Daniel Hindman attribute their initial infatuation with the Scottish synth-pop heroes to Richard Swift, who produced the Portland duo’s debut EP. Sarah elaborates, “One morning before starting the session he asked us if we had ever heard The Blue Nile and played us a few tracks. We became immediately obsessed with their world of nostalgia and longing and the way the songs were simultaneously extremely sad at times but also intensely romantic and modern. It made us feel like the music we wanted to make was validated in some way by the fact that their music had already existed in the universe.”

Pure Bathing Culture boast a longtime reputation for spellbinding live shows. Sarah and Daniel played in the beloved Pacific Northwest band Vetiver before forming PBC. Since, they've released two full-lengths and toured alongside The Shins, Death Cab for Cutie, Father John Misty, Lucius, CHVRCHES and more. Next week, they’ll bring the infectious performance to the cities listed below, with a live band including Zach Tillman on bass and keys, Chris Icasiano on drums, and Justin Chase on keys. The West Coast shows will feature both Hats highlights and fan favorites from the full PBC catalogue, and hint at brand new, unreleased material. WEBSITE.

Gently flowing and melodic 'Downtown Lights' is a dreamy song that exudes intimacy and plenty of "late night vibes". The production is superb, this is one of those tracks that just draws you into the emotional feeling and refuses to let you go. 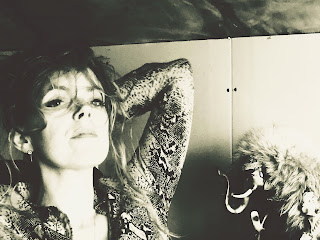 Background - The track, Medicate Me' is from Jeen's upcoming album titled Gift Shop which is set for release this September.

The LP was produced by Jeen herself and is titled "Gift Shop" because she's coming to terms with the necessity to put herself on display as an artist.

"Medicate Me" was "inspired by medical marijuana and also the fact that I'm pretty antisocial. This can be a challenge in the music industry when the whole point is to put yourself out there, so i guess it’s a bit of an ode to introverts too." - Jeen. TWITTER.

We featured 'Any Moment' by Jeen exactly a month ago to the day. Describing the previous track as a "feisty indie rocker," 'Medicate Me' if anything ups the power even more as it packs in a driving rhythm with the vocals melodically flying above. 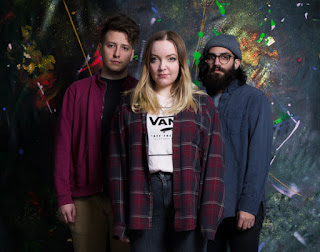 Background - Canadian indie-rock trio Basement Revolver share the title track from their debut album, Heavy Eyes, which encapsulates the air of weariness pervading the band’s sound. The sleepy title “Heavy Eyes” sums up a general exhaustion right down to the bone, as well as hinting at a heavier direction as they deftly merge 90s infused indie rock with fuzzy dreamy pop and poignant, yearning lyrics. As songwriter and singer Chrisy Hurn explains; “Heavy eyes is about feeling really tired. And life is hard when you are really tired.”

The trio of Chrisy Hurn (vocals, guitar), Nimal Agalawatte (bass, synth) and Brandon Munro (drums) embarked on their first tour of the UK earlier this year, with a tremendous set at The Great Escape Festival. Previous single "Baby" has been made Amazon UK’s Week One, added to Apple’s Nightcap playlist, and Spotify’s Indie Highlights. While "Knocking" was added to New Music Friday Canada, and “New Alternative” and “Melancholy Moods” on Deezer.

Basement Revolver’s ascent to the spotlight has been a steady trajectory, capitalising on the success of their debut single “Johnny” in 2016. The track garnered endorsements from DIY Magazine and Exclaim! as well as respected tastemakers Gold Flake Paint, who hailed it a “‘favourite song of the year” contender.  They were signed by Memphis Industries’ UK sub-label Fear Of Missing Out, who released their debut self-titled EP in 2016 with “Johnny” and their second single “Words” reaching the higher echelon of the Hype Machine chart and the EP flagged up in several end of year lists. They followed this up with the Agatha EP in 2017 where the single “Bread & Wine” reached the B-list on Radio BBC 6 Music and also garnered support from John Kennedy at Radio X. The band have racked up over one million plays on Spotify across the two EPs.

To record their debut full-length, the band returned to local studio TAPE where they had recorded both their EPs. They had build up a solid relationship with producers Adam Bentley and Jordan Mitchell, as they continued to hone their signature sound. It’s really the songwriting that makes Basement Revolver stand out from the rest. Assured yet open, beguiling yet honest, heartfelt yet playful. Unable to disguise the emotion in her voice, songwriter Chrisy Hurn shares intimate stories and personal wounds from her past. TWITTER.

The title track from the forthcoming album 'Heavy Eyes' is a solid rocker, with an aural assault that is the most powerful I have heard from Basement Revolver. Even with all of that the vocals manage to convey emotion and feeling.