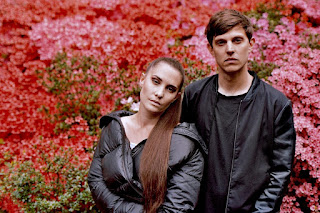 Alpines - Out Of View.

Background - Alpines’ third album Full Bloom is the high watermark of their career so far. It’s the consolidation of years of hard graft, as Bob Matthews and Catherine Pockson’s creative journey finds affirmation in staying true to their musical process. Alpines’ story is one of unwavering determination; after their initial tenure on a major label ended, they persevered to self-release their debut album Oasis, which proved to be a testament to their musical strength and craft. If their enchanting indie follow-up Another River saw the pair finding a new path, new album Full Bloom is a creative blossoming.

While their core influences have always revolved around the music they grew up listening to, Full Bloom is confidently eclectic in its frame of reference and comes across as their most sure-footed work yet. Prince, Aaliyah, Frank Ocean, Lauryn Hill, Aretha Franklin, Erykah Badu, D’Angelo, Kelela, ‘90s rave culture and Massive Attack are just some of the muses channelled in this new work. Pockson’s primary lyrical concerns are growth, ecology, and change (as the title suggests), alongside the everyday challenges of love, acceptance and hardship, making for a record that’s braver than its predecessors. Full Bloom is a long and difficult look at the world around us as well as a deep examination of our complex inner lives, and the accompanying insecurities and vulnerabilities.

Each song is built around a minimal piano idea, expanded on in the serenity of their Kingston-Upon-Thames studio:  “There are tracks that lean more towards Catherine’s love of classic singer-songwriters and soul music, and others that are inspired by left-field producers and rap.” Add to the mix a wide variety of non-musical influences – Netflix drama The OA, architect Rachel Whiteread, contemporary fashion and art, – and it’s easy to see why Full Bloom overflows with innovation.

Alpines announce their return with their first single ‘Out Of View’. The track is a bassy saw wave before a breakbeat style rhythm that descends quickly, accompanied by Pockson’s deeply felt vocal.

"Out of View was written in a period of time when we were both feeling very free and wanted to experiment with new sounds and ideas with no pressure or expectation. The weight and grittiness of the beat contrasts to the soaring and anthemic vocal. We wanted this track to have that striking uplifting quality, we were inspired by classic 90s rave anthems and the power of those vocals and lyrics to lift people and transcend them to another place." WEBSITE.

Intricate beats and subtle synths lay a fabulous backdrop on ‘Out Of View' giving the delicious vocals so much room to soar, as they do with notable feeling. 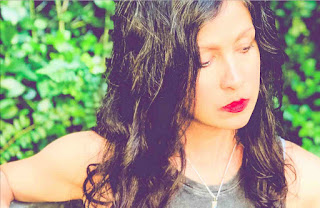 Background - American singer-songwriter K Michelle DuBois has announced her new 'Harness' LP, slated for release in October. Ahead of that, she presents the lead single 'Wild Weed'. This is DuBois’ third solo release, following up her album ‘Astral Heart’ (2016).

On ‘Harness’, DuBois balances the experimental with her innate talent for distinctive hooks. This is an indie pop-rock gemthat is sonic, rustic, and strong on harmonies. Although she remains anchored in hook-laden structures, this album pushes the experimental side of her previous work to new heights.

While most of DuBois’ solo output intertwines classic power-pop with 90s college rock, ‘Harness’ boasts a heftier sonic tone than her previous album ‘Astral Heart’ with its bouncy rhythms, jangly guitars and sing-song charm. While 'Harness' will be released across the main online stores and streaming platforms on October 12, the first single ‘Wild Weed’ will be available for streaming already on August 24. WEBSITE.

K Michelle DuBois vocals are palpably distinct and enticing whether she is softly singing or upping the energy levels. With 'Wild Weed' you get to hear her versatility and this rocker is crammed full of hooks that even at five minutes duration it ends to soon. 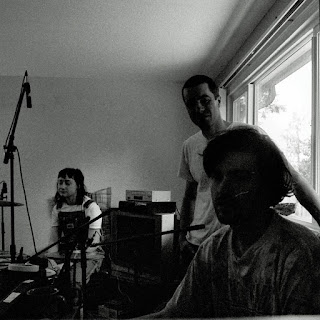 The album uses religious mythology, jungian psychology, and science fiction as a source material to express some universal human struggles like abandonment and identity.

The album is mainly inspired by Sonic Youth, Stereolab, Broadcast, Pavement and Victoria pop punk and post punk as well as bubblegum pop like S Club 7, Len, and Sugar Ray. The album is out now on Gary Cassette.

Teenage Wedding do very in Victoria, they have played shows with Wolf Parade, The Courtneys, Bridal Party, Woolworm, Peach Pit and regularly sell out shows across the west coast. FACEBOOK.

'Wow! Signal' is a sprightly indie rocker with plenty of bounce and some very catchy vibes throughout. The video is fun with just a touch of eccentricity, that works so well with this terrific tune.