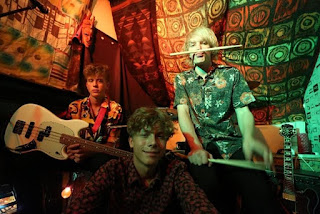 Background - Marvin’s Revenge are a three-piece grunge/alternative rock band from the small town of Wirksworth, Derbyshire. With a distinctly sharp northern slur and a backline reminiscent of the best of DC, Seattle and LA’s music scenes this is just the revenge you were looking for.

They all originate from the town of Wirksworth but mainly play gigs in Nottingham as it is their biggest local city and has a reputable scene for live music. All members have been playing together for around 3 years and have been parts of different bands, but Marvin’s Revenge formed just under a year ago. They have been gigging and writing music together since.

Job (drummer) and Ollie (guitars) first started jamming together 5 years ago as they were in the same music class at school. Luke joined them soon after when he began to learn guitar. All of them went to the same secondary school so through seeing each other every day and developing common interests and friendship they eventually formed a band. Their three favourite bands and main influences are Foo Fighters, The Beatles and Radiohead.

They say about new single ‘Overlook’, “After our release of ‘D’EP’ we decided we wanted to record something in a studio instead of a bedroom. So, we were put into contact with Dubrek studios in Derby and we got straight to it. The single was released last Friday the 21st of September. If we could describe it ourselves we would say it’s a mix of calm, ambient melodies, gritty vocals and powerful drums with contrasting crunchy, bass heavy guitar tones and loud dramatic choruses. We feel that it is not particularly influenced by anything but past influences have had an effect on the creation of it.” FACEBOOK.

Genuine, natural and full of grunge rock passion 'Overlook' is powerful and poignant. Add in some alt rock maturity both musically and with the arrangement and the intense (and fabulous Derbyshire regional accent), and you have a notable song, and a band to keep firmly on your musical radar! 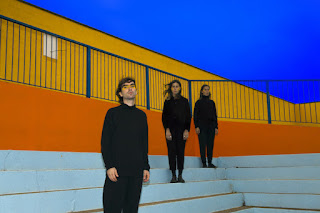 Background - London trio Wovoka Gentle returns with new single '1,000 Opera Singers Working in Starbucks', out now on Nude. The new single perfectly showcases the band's composite sound, on which solid songwriting nods in different directions to experimental pop, electronics and a touch of psychedelia. Of the song, the band said, "We wanted to make a track that was almost disconcertingly upbeat while essentially being about a last-ditch cry for help. We took quite a lot of inspiration from old kids tv themes, particularly towards the end. The title refers to a kind of nightmare image; we wanted to make a track that was dreamlike, but with the potential to descend into a nightmare".

'1,000 Opera Singers Working in Starbucks' is accompanied by a wonderful animation video, created by Kate Woodland: "My style of animation is playful, I have an interest in exploring nonsensical themes through visual metaphors. The process begins by initially scanning pages from art and culture magazines, using Photoshop I cut out various parts of the images and combine them into a new frame. I manipulate and work into the cut-outs and build the scenes from scratch, frame by frame. I met Wovoka last year after a friend introduced me to the band. We discussed working on something together and after listening to the new track it seemed like a great opportunity to make this happen".

Wovoka Gentle are an experimental three-piece from London, comprised of William Stokes and twins Imogen and Ellie Mason. Taking its root in folk and Americana songwritng, the Wovoka sound draws upon the psychedelic soundscapes of the late 60s as well as contemporary experimental, pop and collage music; marrying classic instrumentation with sampling, analogue synthesis and sound manipulation. WEBSITE.

If we ran a song title of the year competition then '1,000 Opera Singers Working In Starbucks' would without doubt be a contender. Anyhow we don't, we just feature music we like (or love) with this track being firmly on the love side of the scales. Upbeat, creative and oozing charm, this is a touch quirky and a whole lot addictive. 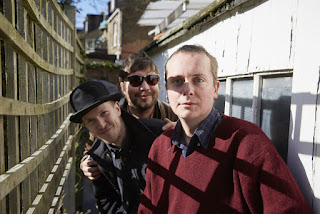 Background - The Wave Pictures return with the promised second album of the year, Look Inside Your Heart - a warm, joyous record celebrating friendship, happiness and drunken party times. In addition to playing their biggest London headline show to date at Koko on 22 November, the band have announced a UK tour in January.

They have now shared the video for first single from the album, “Roosevelt Sykes”. The video was directed by Fraser Watson and features the band walking in the park where they encounter some people dancing. Dave Tattersall describes the song as; “Lyrically, a tribute to Roosevelt Sykes, a giant of piano blues, to all firemen, to my friend Giles, to John Fahey and to my dreams and to all dreams. Musically, an African pop party in the vein of Zimbabwe’s The Four Brothers and The Bhundu Boys but done with absolutely no puritanical slavery at any kind of authenticity or even accuracy.”

Like the first album they released this year, the more contemplative Brushes With Happiness, Look Inside Your Heart was recorded late at night whilst inebriated back at the tiny Booze Cube Studio in Stoke Newington, live to reel-to-reel tape with no computers of any kind. The album is peppered with giggles and chatter, which adds a sense of spontaneity and place.

As singer and guitarist Dave Tattersall explains: ”Look Inside Your Heart is intended as a rallying cry in the war against the machines; while a computer may have beaten world-champion human being Lee Sedol at Go, a machine could never have made music as joyful, spontaneous, happy, poetic, broken and rambunctious as this. Look Inside Your Heart is a bullet in the face of all pop-poseurs and robot wannabes, a die-hard continuation of the vulnerable rebel tradition of rock and roll music, a vibrant work of outsider art and a masterpiece of electric folk.”

Twenty years after forming in Wymeswold, Leicestershire as teenagers, The Wave Pictures have gone on to be one of the UK’s most prolific and beloved bands. Fond of classic rock, jazz and blues, they are also one of the most accomplished, with Tattersall’s guitar solos becoming the stuff of legend. They have collaborated with varying bright stars of the musical firmament, such as last year’s rock’n’roll surf-garage-rock project with Charles Watson from Slow Club, as new band The Surfing Magazines, or their ongoing partnership with ex-Herman Dune member Stanley Brinks, or the very close partnership with Billy Childish for 2015’s Great Big Flamingo Burning Moon.

They first experimented with recording an album all in one go, straight to tape with 2016’s acoustic A Season In Hull. They took the concept further with Brushes With Happiness, making sure that it was a magical album that was completely improvised, with no songs written in advance echoing the jazz and blues recordings that they admire. WEBSITE.

If Talking Heads were an traditional African band then 'Roosevelt Sykes' might just be their song. However it firmly belongs to The Wave Pictures, and it's a joyous lovable and exceptionally catchy affair. The video adds some more, as the bands talent seemingly pours out in all directions.