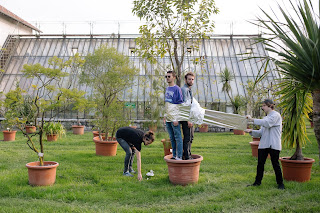 Since their debut EP Waver in 2016, with single “Rosetta” winning Song of the Day honors on KEXP, the band has run a long way: they already toured Poland, Czech Republic, Slovakia, Hungary, Serbia, Croatia, Lithuania and Austria, playing festivals all over Europe and opening for the likes of The Jesus & Mary Chain and SUUNS in 2017.

Where If Not Now sounds very much like a cinematic experience, marking the sound of a fully fleshed-out band exploring, disintegrating and advancing their shoegaze foundation with abrasive, experimental, and even melodic approaches, imbuing their sound with a distinctive sonic signature.

Nine songs, filled with yearning, a sense of abandon and longing for things new, unexplored and unknown, unfold like a rainbow of endless colours and feelings, inviting you to escape. Where If Not Now does sound like a film, a film for dreamers with a runtime that always seems too short. During performances, the band is draped in visuals (courtesy of 5th member Kristina), which makes the experience even more mind altering. BANDCAMP.

'Catch My Breath' is the first of nine tracks on Haiku Garden's brand new debut album, showing off the more powerful Shoegaze side of their music. The band are not cornered into any one specific style, the album mixes lighter, melodic songs (coupled with some fine musicianship) alongside some creative explorations where psych, dream pop and good old rockers compete for attention. As debut albums go, there are plenty of hooks and variety and a sense that this band doesn't care to play safe, rather there is a leaning towards experimentation that is both refreshing and highly listenable. 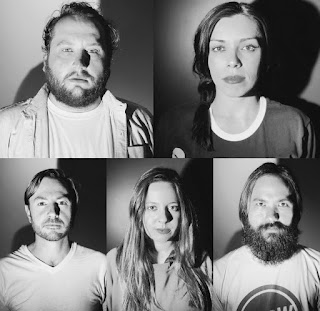 “Vista Del Mar” is about a talented musician that had the tendency to act out of control, black out, be overcome with madness, and wander into house parties that they weren’t invited to. One night, they lit their mother’s bed on fire while being in a blacked out state of mind. They ended up in Aurora Vista Del Mar Hospital, a mental institution that burned down in the Ventura fire last year.

Three years ago, indie-rock quintet Curtsy identified with the luscious soundscapes and pleasant harmonies of love-sick dreampop. Although elements of dreampop and shoegaze still season the backbone of their sound, personal and historic undoings have given Curtsy something to say, and savory sonics are no longer enough. Tell Me How This Ends brandishes relentless drumbeats, propulsive bass lines, and distinctive guitar layers behind cascading lyrics typified by self-destruction, apprehension, cognitive dissonance, and an ever-present lack of control.

Within song-structures and harmonious melodies that pay homage to Curtsy’s dreampop roots, the seamless unification of Tell Me How This Ends’ instrumentation and biting vocals creates a sound that is both nostalgic and innovative. Tell Me How This Ends is the devastation of unmitigated reality wrapped in a shining bow. It's five people who are in love with music but fed up with its euphemisms. What does angry dreampop sound like? It sounds like this. TWITTER.

The tenth and final track on the bands 'Tell Me How This Ends' album is 'Vista Del Mar'. If this is angry dream pop then it's not short on catchy and very likable songs. In actual fact the band produce a mixture of styles with alt & indie rock overtones never far away. There is an overall polished and tight sound, plenty of natural feeling, and that vital element of emotion that ensures the material registers personally.