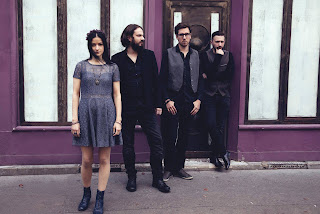 Venice May - Hiding Place (Video) and the album - Illusion Is Inevitable.

Venice May is a project founded in 2013 by Natalia and Vincent, a couple both on and off stage. Their first common effort, "Illusion is inevitable was released in September 2018. Fundamentally rock, full of melodic  entanglements and ethereal atmospheres, their music also incorporates elements from post-rock.

They do not like to cite influences, the desire and the ambition to deliver a unique sound being too strong. Listening to them, however, it is difficult to deny their affiliation with PJ Harvey, Sigur Ros, Portishead, A Perfect Circle, Brand New or Radiohead.

Natalia was born in Ukraine and moved to France at the age of 25, Vincent was born and raised in France. The band is a duo that is accompanied by other musicians for their live performances. The songs were written and  produced by Vincent and Natalia and then mixed and mastered by Alexey Stetsyuk at Grave Town Production. No synths were used, all the soundscapes were created using guitar effects. WEBSITE.

'Hiding Place' is taken from Venice May's new album 'Illusion Is Inevitable' and as we have the option to share both, it a pleasure to do just that. Despite their desire not to cite influences (something their PR couldn't resist above), it's always easy to look for other bands as a reference point. Venice May have an eclectic mixture of musical ideas going on within the album, and central to this is the fabulous vocals and the bands more organic style as they resist the need to use synths.

The result is a gorgeous album where warmth, creativity and a treasure trove of musical hooks, ensure every track is a new adventure. So with or without comparisons Natalia and Vincent have something quite special going on here, so much so that I just hope they reach a wider audience, they are going to appeal to a lot of different musical genre fans, and their originality and fine musical art, deserves some widespread recognition. 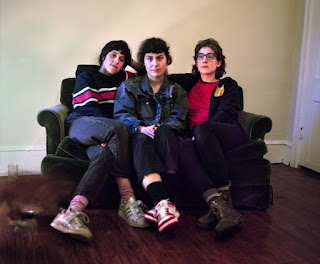 Palberta - Sound of the Beat (Live at Look to Listen Studios).

Palberta's fall tour dates with Porches, Girlpool and Speedy Ortiz, are accompanied by a new music video for their single "Sound of the Beat," performed live at Look to Listen Studios in Greenpoint, Brooklyn.

A new live studio video for 'Sound of the Beat' (and imminent tour dates) are worth a mention and a share, as Palberta delight us with this feisty and lovable song version. At less than two minutes it's also something of a tease to see them live or check out 'Roach Goin' Down' released earlier this year. 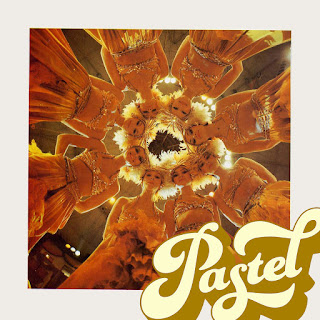 Ganser is a Chicago-based band equal parts Space Odyssey and Ghost World that embraces a post-punk ethos with early synth music’s minimal intimacy, formed in 2014 by Nadia Garofalo and Alicia Gaines. Drawing inspiration from visual language commonly associated with film and their shared art backgrounds, the band was joined in the Fall of 2015 by drummer Brian Cundiff and guitarist Charlie Landsman.

In a world of parasocial relationships and illusions of intimacy, there is the nagging sense that no one is watching you shout into the void. “Pastel” dances with that particular anxious itch, with Alicia Gaines (bass, vox) and Nadia Garofalo (keys, vox) sharing vocals alongside Charlie Landsman’s angular guitar and Brian Cundiff propulsive drums. Pastel is a true hip-swinging panic dance.

Half boasting (“My blood’s thicker, redder than yours”), half frightened (“Hungry to show anyone anything at all”) the song details the collective consumption of self when everyone is an audience, and everyone a performer. Everything is happening all the time, and isn’t that terrifying?

The band toured the East Coast and South in support of the album, as well as playing multiple festivals this year (Do Division, Athens Popfest, Cold Waves). The foursome has had the pleasure of playing with artists like Modern English, Thee Oh Sees, Ought, Micachu and the Shapes, Cheatahs, Wax Idols and King Woman. Ganser continues to make bright black music for space transmissions and panic attacks. They are currently working on their second album. BANDCAMP.

Ganser's new video for their brand new single 'Pastel' is our third feature for the band this year and once again we are treated to a retro video accompaniment to immerse ourselves in. Ganser's loose and potent rock and roll is as delicious as ever, and for reasons I am still to work out, both images and music when combined seem to resonate a whole lot more.