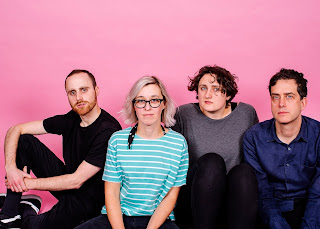 London band Chorusgirl reveal their stunning new animated collage video for "In Dreams", which was created by renowned animator Ruth Barrett. The track is taken from Chorusgirl's forthcoming second album Shimmer and Spin due out on 16 November via Reckless Yes. The band will be heading out on the road in November.

The handmade stop motion video for "In Dreams" consists of an impressive 2500 manually cut out paper prints filmed using the strata stencil technique, an animation technique invented by Javan Ivey, and a further progression of the complicated strata cut technique first used by David Daniels. The video uses the red colour scheme of the album art for Shimmer and Spin and was inspired by the reverb-heavy shimmer of the band’s sound, rollercoaster rides, fireworks, dreams and all things spinning.

"In Dreams" is a song about feeling out of place. It’s a coming-of-age anthem about dreaming yourself out of the small town you grew up in; the place you never fit in. It is also the much more dreamy companion piece to the rather angry "This Town Kills" from the debut album, and describes someone who lives mostly in their dreams, day and night. It is about growing up, feeling unconnected and patiently waiting and vividly dreaming for your turn.

Shimmer and Spin by Chorusgirl is the album that overcame the odds. Their second full-length chronicles a tense year, created during a period of crippling anxiety and a relentless string of bad luck and bad news. On first listen these tensions are not immediately apparent but beyond the bright sparkling melodies there are beautifully crafted yet deceptively sharp icebergs lying in wait. WEBSITE.

We first featured Chorusgirl last month with their first single 'No Goodbye' and 'In Dreams' is also taken from their 'Shimmer and Spin' album set for release next month. Once again the melodic vocals are splendid as the bands distinctive indie rock sound hits the spot with plenty of refined hooks. 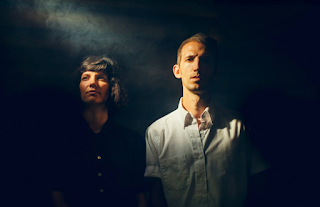 Lowland Hum have debuted a new song and video and announced their fourth full-length album Glyphonic to be released February 22. The music video was created in collaboration with Pando Creative Co. and shot in the countryside near Charlottesville, VA, where the band is based. The band tell us "This song is in part an exploration of vanity, youthful frivolity, and femininity as it was internalized by Lauren’s pre-teen mind."

Lowland Hum are an art-folk duo composed of husband and wife, Daniel and Lauren Goans. Over their young but prolific musical career, the band have garnered critical acclaim from NPR, The Washington Post, The LA Times, Huffington Post, American Songwriter and more, their lyrics noted as poetic and evocative, their arrangements praised as minimal but dynamic. Creators of the #SupportQuietMusic movement, the band maintain that in an increasingly polarized and noisy cultural moment, vulnerability is a powerful offering and restraint stands in welcome contrast to new, bombastic norms. New album Glyphonic is the purest distillation of this thesis to date, a masterful exploration of stillness in rising chaos.

Lowland Hum are a dedicated touring act, existing on the road nearly 200 days out of the year. The pair just completed an East Coast run with Horse Feathers and in recent years, have played alongside the likes of Josh Ritter, The Oh Hellos, Jesca Hoop and more. They are known for cultivating meaningful connections with fans, crafting customized-to-order "songlets" through their own Send-A-Song service, passing out handmade lyric booklets at shows, and engaging audiences in unconventional Q&As. In every part of their art, these indie pioneers are committed to the human touch. Full headline tour to be announced. WEBSITE.

'Salzburg Summer' opens with a soothing and natural folk feel, the vocals are tender and pleasing and the understated yet catchy musical backdrop gradually adds depth creating a rather addictive vibe. 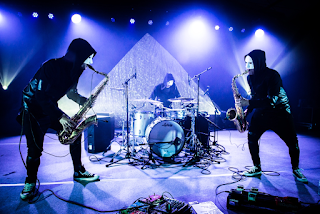 Belgium-based acoustic-electronic BLOW 3.0 just released their new single Stella. The track announces the mysterious three piece's upcoming second album, scheduled for release early 2019. Over the last two years the band has grown from a busking sensation to a true live-on-stage band that bursts with positive energy.

The masked musicians - two saxophone players and a drummer - started playing on the streets in Ghent, Belgium in 2011. Soon after, some of their videos went viral on social media and soon the three-piece was playing the streets of just about every city in Europe and eventualy, stages of Jazz- & Worldmusic festivals.

The two saxophones roar like guitars and pump like synths supported by a mesmerizing, groovy drum beat, creating the vintage BLOW 3.0-sound. Stella is now available on all streaming- and download services. The album will be released early 2019 via Dox Records. FACEBOOK.

'Stella' has plenty of unique attributes and it's not short on power or intensity. The musical arrangement is fabulous as the band defy any one genre categorisation, on this sublime instrumental piece that just begs for a second play. 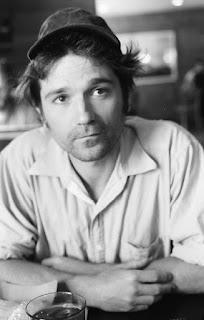 Twain has released their first new music since 2017's critically-lauded Rare Feeling. Twain's singer and songwriter Mt. Davidson tells us "This song is about the freedom-feeling of allowing Love its natural Death." NPR All Songs Considered premiered "Young God (gotta lotta feeling)" this week, noting "Twain songs retain a live energy with little editing. Like an old cassette, the sounds on these records are limited to a mild and pleasant midrange and swathed in a lisping hiss. Even as "Young God" rises from its quiet, glimmering opening to a thumping, full band apotheosis, the coloring of that sound frames it like a photo in an album."

With the song, Twain announced a 12" double EP to be released January 25 on Keeled Scales. Titled 2 E.P.s, the 14-track collection represents two distinct moments in the artist's recording history. Side A is New Miami Sound, unreleased material from the Rare Feeling album sessions. Side B is Alternator, an intimate recording of Davidson performing a selection of his songs in a van; it is the first fully solo Twain music to be released on vinyl. The painting ("Margie") featured on the album jacket was made by the group's drummer, Peter Pezzimenti (@friendthathelps).

Over the course of a young but eventful career, Davidson has contributed his virtuoso musicianship to the likes of The Low Anthem, Spirit Family Reunion, Deslondes and more. He spent 2018 on the road, touring as Twain alongside Langhorne Slim, Horse Feathers and Buck Meek among others and making his Newport Folk Festival debut. Demand for his devastatingly raw stage presence continues to build nationwide. He'll begin another run through the South next month. BANDCAMP.

There is something quite captivating about 'Young God (gotta lotta feeling)' a song that is winsome, creative and very catchy. It's also one of those songs that seems to just build and build and still manages to keep the same personable and beautiful vibe throughout. 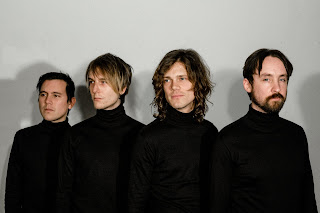 Chicago’s Faux Co. is the brainchild of songwriter Ben Mackey. Originally from Santa Rosa, California, Mackey has been writing 60's influenced Indie pop songs for a decade. After stints in the bands the Subtitles and Silver Ships, Ben moved to Chicago in 2012. He formed the Red Threads shortly after with Anna Holmquist (the Curls, Ester), Claire Wellin, Ben James and Jason Homyak. Trevor Pritchett (Lucille Furs) joined the band shortly thereafter and the group played around Chicago for a few years.

In 2015 The Red Threads disbanded as Ben decided to start a new group. Pritchett joined on lead guitar with local DIY legend Chris Lee (Beastii, Bloodhype) on drums and Faux Co. was born. The group played shows locally for a few years, crafting all the layers to Ben's melodic pop songs.

In 2016 the group headed to Downbeat Studios and Minbal Studios and recorded their debut album. Sean Mcconnell and Chris Lee split the engineering and producing duties and the group made a solid record reminiscent of classic 60's pop. After recording sessions spread throughout 2016 with notable guest appearances by Holmquist and Danny Cohen (Terriers), the group spent the next half year mixing and mastering (w/ Mike Hagler of Kingsize Soundlabs) the record. “Set the Record Straight” b/w “Prozac Spacemen” is the first single from the debut (release date TBD). FACEBOOK.

'Set The Record Straight' is a potent rocker, where everything feels energised and yet the musical arrangement leaves room for every musical and vocal element to have clarity. I guess it's a case of modern mixing techniques meet timeless rock and roll ideas, and combine to make some splendid music.