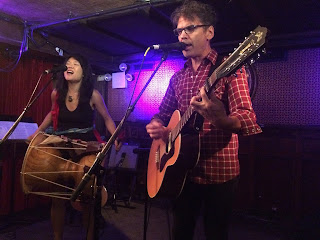 Meat Cake is the new double-A-sided single of Lusterlit songs inspired by comic book artist and author Dame Darcy's series of the same name, and written for her Bushwick Book Club event with Brooklyn Book Festival. Lusterlit were so inspired by her renaissance-mermaid royalty that they immediately started planning a Lusterlit record.

The relentless indie drive of "Wax Wolf" and the chamber/hip-hop epic "Cutting" are now available at Bandcamp, Spotify, Apple Music and on blue vinyl, courtesy of Brooklynphono!

Lusterlit produces Bushwick Book Club (founded in 2009), the international performance series featuring songwriters and performers of all kinds, putting on regular shows featuring new music, art and snacks inspired by a chosen work of literature. Lusterlit formed to perform and present the songs they have written for Bushwick Book Club as fully produced recordings, alternating lead vocals and harmonies while supporting each other on guitar, bass, piano, synth, traditional Korean drum, accordion and more. WEBSITE.

The new single 'Meat Cake' comprises of 'Wax Wolf' and 'Cutting', and helps explain my attraction to the duos music (this being their fourth feature). The sharing of lead vocal duty in itself ensures a level of variety, however it goes deeper than that, their knack for enticing musical hooks, and the intrigue that the lyrics always provide are key. Add in the choice of instrumentation and the whole combination is always fresh. Enough praise, they have a book club to run... 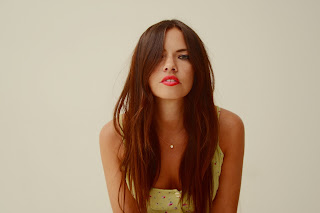 Berlin based, American born musician Erin K is excited to announce the release of new single Happiness, taken from upcoming album I Need Sound due for release early 2019. The album features a beautiful mix of IndieFolk / Retro-Pop sounds and is the follow up to successful debut album Little Torch (over 3m Spotify streams), released last year.

Happiness explores the titles theme personified in the form of a character on a journey; who tries to connect to different individuals along the way and become disheartened as each encounter cannot engage with his emotion. The video explores the themes of liberation and rebirth. Filmed in West Cork, Ireland the video is inspired by the aos sí; celtic folklore of fairies and forest spirits; and was the second time Erin K had collaborated with director Nathan Erasmus having worked together on the video for 'Assholio' previously which aired at the Oscar and Bafta recognised Animated Encounters film festival, IndieCork; 2018 Fastnet Film Festival in Schull as well as winning the audience award for best short at the Small Axe Radical Film Festival too.

With songwriting influences including Jaymay, Lily Allen and Kate Nash, Erin is known for her fearless and original lyrics. Her mainly autobiographical songs are sometimes inspired by strange and uncomfortable events; often with a lighthearted portrayal of a harmful or weighted experience. The songs on the album are delivered with light-hearted humor and wit, showcasing a vast range of songwriting topics; from heartache… to toothache!

Erin describes Happiness as a song “that explores the theme of happiness personified in the form of a character on a journey. He tries to connect with different individuals along the way and becomes disheartened as each, for different reasons, cannot engage with his emotion. A boy, for example “who you can tell loves his band, ‘cause they all look so alike”, refuses him in favour of his own darker emotions that contribute to his creativity. In another moment, he is rejected by a girl unable to let go of the sorrow around a death for fear of losing the memories attached. In a nutshell, it’s a story narrating the complexities around perceived simple emotions, like happiness, and our ability or refusal to engage with them.” FACEBOOK.

'Happiness' is intrinsically catchy and stylish from start to finish. The lyrics add more, the video is totally aligned to the songs theme, in all this suggests that the early 2019 album release will be quite something. 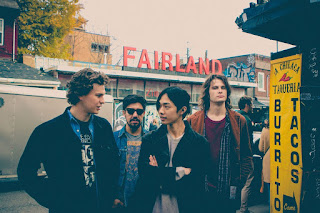 The Fame ask the question (and go on to answer it) What do you see when you look in the mirror?

“Wide Awake,” our debut single, focuses on the topic of self-reflection and the happenings of everyday life.

While crafting the song, we collectively drew from personal life experience  and our rock music inspirations to create something that anyone can relate to.

“Wide Awake” is the first single to be shared from our upcoming debut EP. Produced by Brian Moncarz (Our Lady Peace, Moneen, Circa Survive), the EP is set for release in early 2019. WEBSITE.

Notable alt rocker 'Wide Awake' mixes superb (and just right for rock) vocals with solid backing harmonies and a feisty and powerful musical backdrop. It's one of those songs that stands out for all the right rock and roll reasons.

10,000 Flowers is an album-closing, shoegazey mood-piece that explores the idea that one might handle things differently if given the chance. The song’s simplest message is about letting go, and the first and last line are perfect bookends for the wider story. In the first line, Frey shows angsty vulnerability and admission of fault with, ‘I may not have regrets but I might do it different.’ And the closing line, ’When are you going to let 10,000 Flowers bloom?’ can be paraphrased by asking when will you let go?

Kazyak is an indie rock band based in the Twin Cities. The band has recorded 2 EPs (1 unreleased)  and an LP (unreleased) and finds it's source in a deep pool of experimental music. The live lineup  includes: Peter Frey (guitar), Andy Wolfe (guitar), Pat Hayes (synth, piano), Tyler Safranek  (bass),  and Nick Grewe (drums).

The band finds its source in a deep pool of midwestern music, drawing on the abstract side of Bob  Dylan's songwriting and lofty sonic architecture from the likes of 12 Rods, Fat Kid Wednesdays,  Tiki Obmar, and Halloween, Alaska. The group has shared the stage with many, including LA indie  rockers the Local Natives and Duluth-based Trampled by Turtles, and continues to collaborate  closely with Minneapolis-based engineer/drummer Brett Bullion.

'10,000 Flowers' softly opens with a gentle melodic feel and some distinctive and pleasing vocals. Some beautiful acoustic guitar and subtle swirling synths add even more to this intimate yet atmospheric song.