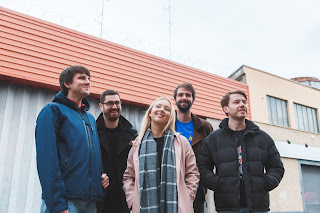 Silverbacks - Just In The Band.

Irish art punks Silverbacks delve into themes of false idolatry and deeper connection in their latest track ‘Just In The Band’ out now on PK Miami.

Produced by Daniel Fox from fellow Dubliners Girl Band, 'Just In The Band' carries the same nagging unease as previous single 'Dunkirk' with taut drums and unrelenting bass underpinning seasick guitar arps and Daniel O’Kelly’s blunt commentary on the ‘problems down the back’. Feedback soaked and frazzled, it sees the band step further away from their indie roots and more into the groove - if the groove covered itself in petrol and dared you to light the match.

Silverbacks are a thrilling prospect, delivering their own louche take on NYC-indebted rock: slack enough for the tastemakers while also mining the gems of a pop vein, catching the ears of those with a taste for a good hook. Now a full-fledged five piece after graduating from the bedroom project of songwriting brothers Kilian and Daniel O’Kelly, they ply their trade with as much emphasis on the dry humour running through Daniel’s lyrics as the propulsive, triple guitar-led onslaught in their music. TWITTER.

We shared 'Dunkirk' back in June and the new single 'Just In The Band' is another feisty rocker. The vocals have a splendid punk feel to them, the driving guitars add some melody, and collectively this is a hook fuelled beast of a song. 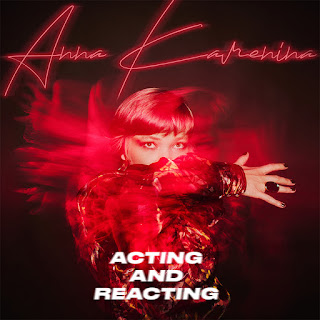 Anna Karenina is now releasing a mini album called Acting And Reacting, following up her debut album Brain Ghosts and Goosebumps released in 2015.This time she’s looking out towards society, away from her brain ghosts.

Wondering how you can best fit in your role as a daughter, friend, lover, employee, “an adult” and a woman. How society makes you play your determined role, in both good and bad. The title Acting and Reacting is referring to the spectacle that is life, playing the roles that’s expected of you. These are songs about being a sensitive person in a world that’s whirling.

Co-producers to this record are Ida Lindberg (Me and Skinny Joon) and Willie Alin (Dean Allen Foyd, Music Is The Weapon). The three of them have been producing partly together and partly in pairs with the intention of getting different styles in the production.

While Ida and Anna-Karins work is thoroughly and carefully produced, Willie is more hands-on and together they make the perfect dynamic trio, creating a sound of Kate Bush-inspired art pop cross-bred with psychedelic rock. WEBSITE.

Comprising of six tracks 'Acting and Reacting' really is a feast of high quality art pop / rock that explores different ideas with assured confidence. There are no passengers here, every song is a packed full of creativity, so much so that calling the collection a mini epic, seems like something of an understatement.