February 01, 2019
Sister John may be drawing some interesting comparisons however the new single has plenty of individuality and the video is fabulous. The new single from Threatmantics is refreshingly original with distinct vocals and a superb musical arrangement. We featured Shapes on Tape three times last year and the new song is another hook fuelled affair to enjoy. The Wild State offer a breezy and infectious indie rocker that doubles as a massive tease for their forthcoming album. The Limiñanas exude psych that is addictive, intriguing and atmospheric. Although we have to go back to 2017 for our last taste of Trudy and The Romance, the new song is yet another delicious "mutant 50's pop" song demonstrating the bands modern take on retro sounds superbly. We finish up today with Yacht Punk where some beautiful guitar sounds and refined rock vocals make this song hard to resist. 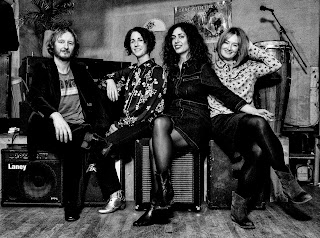 Sister John formed in somewhat serendipitous circumstances, having all met whilst singing in The Parsonage Choir; from there Amanda McKeown cajoled the others into helping her perform her songs at a one off event and they immediately recognised the intrinsic musical understanding they shared as a group and were soon an inseparable gang.

The first single from the new album, ‘I’m The One’, welcomes comparisons to a post-Nico Velvet Underground and Patti Smith but the overall footprint is unmistakably Sister John’s.‘Lost and Won’ may well be the album’s true masterpiece, a dark sparse sorrowful affair that sees Amanda McKeown's vocals matched with Jonathan Lilley's slide guitar and the harrowing strings of Heather Philipsand Sophie Pragnell. 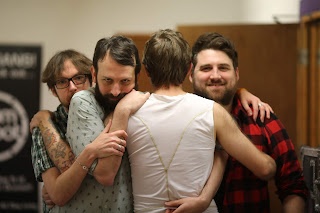 Shadow On Your Heart is the third album from maverick Welsh art-rock misfits Threatmantics, recorded in Paris and Cardiff by French producer Anne-Sophie Ouvrier.It is their first album to be released on 12” vinyl, with a limited edition, numbered run of hand printed covers by acclaimed Welsh artist John Abell. 'Shadow On Your Heart' will be released via Ffatbyrg Records on 22.02.19.

Threatmantics attempt to crowbar as much into rock and roll as possible. Veering wildly from heartbroken folk, to balls-out rock, to spine-crushing metal, to good-time pop; barely held together by very fine thread and pretty ribbons, they play music that sounds as much like the band they wish they were as possible. Whether they will survive the pits and troughs remains to be seen, but it’s a special thing to be able to soundtrack your own adventure. 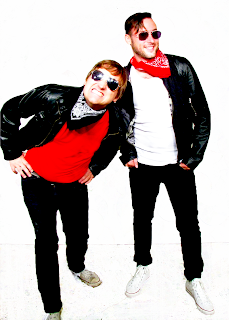 Shapes on Tape is a Brooklyn-based Brew-Wave/Ultrapop group whose infectious hook-laden three-minute bangers represent a new era where loud guitars and synthesizers can coexist and even party together. A band that once made L Magazine implore U2 to "move over and let Shapes on Tape seize the thrown(sic)," Shapes on Tape asks the question, "What if Walter Mondale had won?"

Genre-hopping producer/multi-instrumentalist/90s groovebox enthusiast Adam Kruckenberg, formerly of Midwest glam legend Vibralux, and guitarist/poet Jason Matuskiewicz, a veteran of beloved Lexington, KY band Candidate, began collaborating in 2014, but they didn't complete their sound, best described as a sonic assault of feels, until they expanded S on T to include drum savant and overall swell guy Justin Heaverin of Noisebody and The Silver Tongues.

Matuskiewicz’s lyrics and straightforward style walk the line between high and low concept with an abrupt 3-chord frankness that never takes itself seriously, while Kruckenberg’s powerful vocals and synthetic re-imaginings take the songs to epic proportions. Combined with Heaverin's unstoppable groove, you could be forgiven for wondering when The Boss had time to do a secret collaboration with Erasure. With the help of Grammy-nominated producer and Hedwig alum Justin Craig, SoT's forthcoming album Legends in The Process is sure to be a supersonic, beer-fueled dreamscape littered with the carcasses of waves and cores. 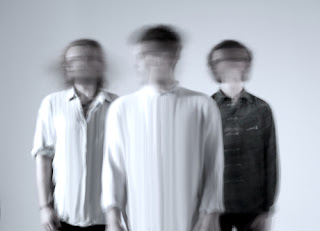 The Wild State - Air Runs Out.

The Wild State are an enigmatic new band from Brighton, UK. Following their time studying songwriting together at BIMM, they began to create their ethereal debut album, which occupies a place between The National and Bon Iver. From the strength of their initial demos, the band signed a publishing deal with IAMSOUND Music and have now returned from recording their forthcoming debut LP 'Light Along The Waves' in Connecticut, with legendary producer Peter Katis (The National, Interpol, Kurt Vile). The first single from this unique and beautiful offering, 'Air Runs Out’, will be released on 1st February via US label Beverly Martel.

'Air Runs Out' is an epic and emotionally rich introduction to the Brighton band, who are already garnering excitement industry wide for their impeccable live show. The song is written about the break down of a suffocating relationship ("The ground we share is breaking / And the air we breathe is poison"). In singer/lyricist Josh Difford's words, "it's the horrible process of love turning stale and about why we sometimes tolerate it for routine and security". 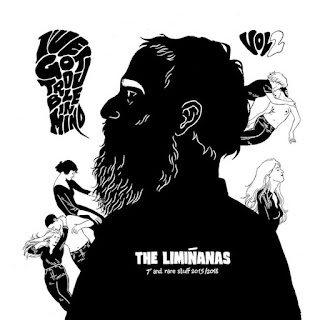 To mark their live return to the UK in February with a tour which includes a sold-out London headline show at legendary 100 Club on the 13th February, French psych duo The Limiñanas has shared a new video for 'Trois Bancs', a track taken their latest album 'I've Got Trouble In Mind Vol. 2', a collection of rare recordings, 7" singles and unreleased materials, out now on Because Music.

“The ‘Trois Bancs’ (Three Benches) of this song are those from a French school in the 80s. With all the cliques from that period: the mods, the skins, the punks, the rude boys", says Lionel Limiñana, "It’s a trip. We don’t really know what happens to the main character. He’s probably dreaming. He comes across all the other characters of the story through a lysergic prism. He finds himself in a series of familiar situations, in which he meets all the important people in his life. The video by Sylvain Rusque tells that story. He’s done a huge, meticulous and highly dedicated work. I gave him very few information, only certain elements about the story and the people in it. We were very impressed when he showed us the film and so we’re very proud to release it today.”

Director Sylvain Rusque added: "I introduced myself to The Limiñanas and expressed my motivation to collaborate. I showed them some of my work and they really liked it. They told me about the ‘Trois Bancs’ and trusted me. The freedom to create I enjoyed creating this video really reflects their mindset. Additionally, I decided to introduce some references to their career and their last album.” 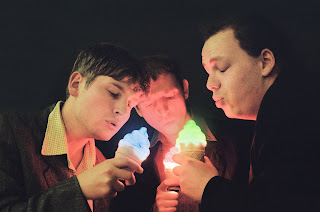 Trudy and the Romance - The Original Doo-Wop Spacemen.

Bustin’ out of Liverpool, UK, Trudy and The Romance are ready to woo with the mutant 50s pop and self-declared alligator rock-n-roll of their eagerly-anticipated album Sandman. They preview its first cut, ‘The Original Doo Wop Spacemen.’

The new single drives forth the dreamboat pop of their recent “Junkyard Jazz” EP through its Spector rhythms, whilst incorporating the album’s nods to Jonathan Richman, Louis Prima, Brian Wilson’s wall of sound, film composers Henry Mancini and Bernard Herrmann, and the golden age of Disney. “We directed this like a blockbuster, with characters and a story,” Trudy’s singer Olly explains. “We worked with a pianist, 1940s Disney choir, county pedal steel guitar player, film score violinist and harpist. It’s heart-warming and gently creeps up on you. It’s not tugging but just kind-of-there; Alligator Rock’n’roll!”

Recorded with producer David Pye (Wild Beasts), Sandman draws the listener further into the trio’s colourful world, and follows the latest escapades of its central protagonist, little Johnny, and his inner turmoil. “It’s a coming of age tale about asking for your innocence back. It’s a breakup album and loosely based on the hero’s journey,” Olly says. Rocking and reeling through dreamy harmonies and dazzling guitars it’s everything good pop music should be – catchy, clever and brimming with curiously wonderful characters in Trudy’s inimitable realistic-cartoon narrative. 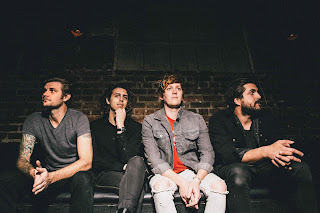 "The video was shot entirely on a vintage Super 8 camera during the summer of 2018. Each roll of film only has 3.5 minutes of footage, so you have to be really precise with the shots, which I wasn't. I wanted to capture an organic feeling of the end of summer and the nostalgia that goes along with it. I let a lot of my friends try it out and shoot whatever they wanted, so it kinda turned into a group project. We shot in Sequoia National Forrest, Venice Beach, and at a mansion a friend was house-sitting in Bel Air. Absolutely no magic mushrooms were involved in the making of this film."

"Laying on the floor of his unfinished basement studio in Beachwood Canyon, Graham Bockmiller realized it was time to go out on his own. The LA-based band Great White Buffalo had run its course, leaving him unsure what would come next. Graham spent the next year holed up inside his studio by himself; contemplating life, writing, collecting nude calendars of Eastern European women suggestively holding large trophy carp, and experimenting with the raw recording skills he had taught himself. He began exploring new sounds and textures outside of the traditional rock staples of guitar, drums, and bass – testing the limits of his DIY recording chops in search for a more interestng, vibier sound. These songs would later become the beginning of Yacht Punk.