July 29, 2019
Swedish Indie band Steve Buscemi's Dreamy Eyes have released a new single entitled 'Change of Heart'. The deep bass line drives the song, the vocals are both melodic and quiet dominant, whilst the overall arrangement is distinct and expansive.

'Work' is the third single from Emily Breeze ahead of the new album 'Rituals', it's a fine alt rock song with plenty of indie pop sensibilities that give the song real traction.

Van Houten have shared 'Moon' a fabulous song where the guitars remind me a little of the Cocteau Twins, however the vocals and harmonies take this song towards dream or indie pop, and the laid back vibe is gorgeous. 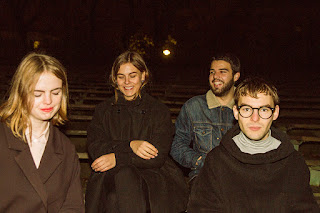 Behind the odd name Steve Buscemi’s Dreamy Eyes you’ll find one of the most promising new bands on the blooming Swedish indie scene.

The band is now back with new single Change of Heart after 19 months of silence. The song is true to the original sound of Steve Buscemi’s Dreamy Eyes with instantly catchy bass lines, dreamy vocals and shimmering guitar riffs but with with a more filling sound than previous outputs.

Lyricist and singer Siri Sjöberg about the song: “I wrote the song last winter when there was a governmental crisis in Sweden. It’s up to each listener to interpret the lyrics but it’s definitely about swedish politics.”

The band - consisting of Siri Sjöberg, Tilde Hansen, Elias Mahfoud (Chez Ali) and Edvin Arleskär - formed in 2015 after bassist/vocalist Tilde tweeted out "Does anyone/anybody know someone who wants to play in a band together with a bassist and a singer that haven’t played in a band for a year and are dying of boredom?". 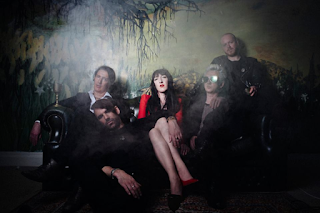 The third single from forthcoming Emily Breeze album Rituals is a shimmering indie pop anthem entitled “Work”. The glossy sonic exterior and radio friendly chorus act as a foil for the ice cold cynicism and pitch black humour of the lyrics which were inspired by Patrick Bateman (American Psycho) and Emily’s own experiences of hauling herself out of bed every morning to make a pointless profit for somebody else. 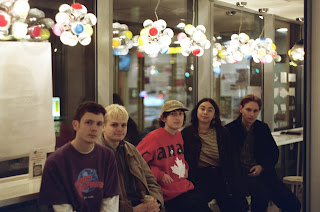 Leeds quintet Van Houten are a band of sharp parallels. Their languorous, sub-mersive soundscapes are dappled in evening sun, while the lyrical content within is evocative of a blanket of unforgiving fog that foretells pounding rains ahead. Newly signed to Clue Records, the band come straight out of the gate fully armed with an accomplished and immediate self-titled debut, out September 13th. Now they share lead single 'Moon' - an ode to a new love.

Talking about the track, lead singer Louis Sadler said: "Moon is essentially a very personal love song. It explores the fleeting qualities of love and the desperation of wanting to give somebody anything and everything. The line “You always leave so soon” describes how a crush or loved one always seems to leave before the one chasing has chance to show the full potential of their affection. It was written around 3 years ago after I heard Weird Fishes by Radiohead & was intrigued by the chord changes. It's been reworked lots since then until it turned into Moon."

While artists operating from a similar whimsical, slacker-pop wheelhouse (think Connan Mockasin) often draw content from literary, sci-fi planes, Van Houten use their dreamy sound world as a backdrop for their most crushing struggles. Sadler is unflinchingly honest, railing against depression and its innate ability to inhibit him from being the caring partner he wishes to be.

Largely recorded across just three December days, ‘Van Houten’ was produced by Martin Smith (Gomez, Bombay Bicycle Club, Richard Hawley). With Smith at the helm, Van Houten were able to realise their true sound. “We met Martin at a small bar in Sheffield. He went on to do a whole new mix and master of our then single ‘Ever Changing Light.’ The way Martin made the track sound made us realise what could be possible for our music. It was a match made in heaven.

“When making the album, we were able to finally sculpt the vintage Hi-Fi sound that we have always been searching for. The title is Van Houten because this is the first work we have created that truly represents our band. This new sound is the true sound of our band,” Sadler explains. An album for all seasons, it’s clear that Van Houten are already expert at their craft and a band to be reckoned with. The rest of 2019 and 2020 will see them embark on further UK tours, while the future holds a magnitude of possibility for the exciting young quintet. 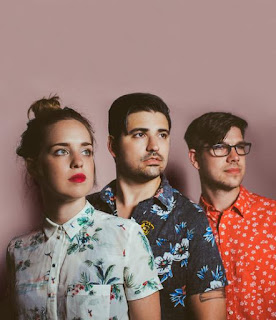 The Astronots are an American rock’n’roll outfit, spearheaded by its founding members, Niko Giaimo (Vocals/Guitar) and Allee Futterer (Vocals/Bass). The two are established musicians in their own right. Futterer has had years of cutting her musical teeth, backing some of the biggest names in the Los Angeles music scene, while Giaimo was an integral member of the scoring team behind productions such as Dexter and Dishonored II. The two come together on The Astronots, combining elements of their quintessential Los Angeles upbringing, classic rock, and west-coast cool. Now completed by guitarist Eddie Campbell, the group continues to wow audiences across the nation.

Inspired by the likes of Led Zeppelin, Alabama Shakes and Kings of Leon, the trio have crafted an EP oozing with gritty guitars, explosive percussion and raw energy. The highly anticipated Cotati is brought to life through its organic instrumentation and authentic lyricism. “We really wanted to capture something honest. The songs cover a variety of issues.. school/public mass shootings, anxiety, drinking, love, pain, passion, cheating.. I think we managed to create individual genuine stories in each song. I think the theme would be honest perspective on many of life’s challenges”, they reveal.

Leading single 'Wandering Eye' is a quirky love song. Based on a true story about a couple the duo grew up with. Giaimo reveals, "They had an insanely beautiful Cinderella wedding, but not long after that the wife started cheating, and the husband was secretly gay and going out with his friends in women's clothes. They were both cheating on each other in different ways, and somehow, everyone knew about the cheating except for the couple themselves!!! They ended up splitting up and are now both happily married in new relationships!". Sonically the single features 60's soaked melodies, soaring harmonies and an infectious toe-tapping rhythm.

The Astronots palpable garage sound has lent itself to placements on film and TV, as well as curated playlists and blogs. The Astronots song, ‘Black Milk’ from their 2017 E.P Strange Terrain was featured on the CBS hit television show Life in Pieces. While their song ‘Begging for More’ was placed in Andrew Garfield’s 2018 feature film, Under The Silver Lake.