November 01, 2019
Mona Visa have just released their debut song 'Peter Pan' and the brother and sister duo have created a stand out and quite stunning piece. === Chicago post punk band Daymaker have a brand new album 'Let The Sun Fall' comprising of ten tracks, this is natural hook filled and uncompromising material. === Hurtsfall have shared 'Calling Out' where alt rock and Gothic infused vocals come together wonderfully on this seven minutes of aural bliss. === Seazoo return to Beehive Candy for a third time with 'Heading Out' a bright indie rock song that packs charm and vibrancy. === It's the third appearance this year here from HunBjørn this time with a video for 'Keep Breathing' a synthy and dramatic electro pop song. === We have the latest single from Jaguar Moon entitled 'Bird Song' and we have also included 'Ostrich' both taken from their fabulous alt pop debut E.P. === Brooklyn based trio Wilsen have a new video for 'Ruiner' the title track from next February's new album release, the bands multi genre sound teasing us ahead of the full batch of material.
------------------------------------------------------------------------------------------ 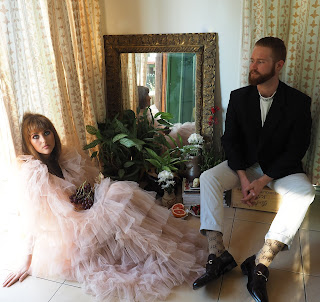 Brother and sister Jake and Ashleigh might appear to be the archetypal Australian dream: carefree lives under constant Gold Coast sunshine – sadly, the sunshine has regularly turned to darkness. A life often leading to substance addiction, destitution and chaotic relationships threatened to engulf both their lives before fate intervened and their subsequent rebirth as one of dream-pop’s most exciting talents.

Peter Pan is their debut release, a magnetic whirlpool of imagery, glistening guitars and Ashleigh’s achingly gorgeous vocals. Mona Visa are life affirming and vital in every sense.

Ash is an independent fine artist and fashion curator, Jake a full-time musician. Both are very close and spend every possible breath and second spare working together on their own music with all their energy poured directly into the music. Ashleigh is more the eccentric, anarchic, artist type, whereas Jake is grounded and softer. 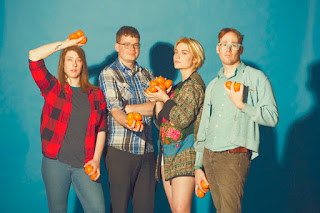 Let the Sun Fall by Daymaker is a long gestating collection of songs by the Chicago post-punk band that serves as a celebration of life and a call-to-action.

The album artfully delivers an explosive collage of sound and performances to honor and process the rage and action required in today’s America. Focus tracks "MPC" and "Blood Pressure" function to stir feelings of solidarity to create a more equitable world, while the tracks "Sun Song" and "Mask On" build up the messages of self-love and justice. As a whole, Let the Sun Fall is as much about accepting love as it is about turning our attention outward - to a world that requires holistic action.

Recorded at the Chicago based studio JAMDEK by engineer and producer Doug Malone, the band collaboratively re-shaped their sound into something more grungy and vital that retains the energy and excitement of Daymaker's live performances. The cover photography, which was captured on film without the use of Photoshop, depicts vocalist, Erin Delaney, lying paralyzed surrounded by fruit and dust that appears to be lifted all around her. The image speaks to a moment of stillness among chaos, which is often exactly what music can offer us - affirmation and encouragement while moving through madness.

Daymaker often performs in the Chicago and mid-west region with other notable acts such as Mykele Deville, Deeper, Rich Jones, Blacker Face, Malci, and Ono, among others. Let the Sun Fall comes out November 1st on Diversion Records. 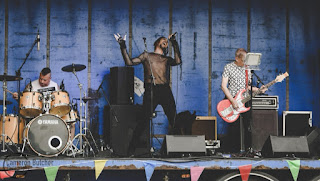 Your new obsession starts here! Hailing from Robin Hood's hometown of Nottingham, Hurtsfall have been steadily building a following, and a reputation for putting on a serious live show!

A post-punk band, with gothic overtones and synth-pop sensibilities; Hurtsfall are unique. Playing (mostly) original material but recalling the essence of your favourites you can be sure to be inspired...

Having already played with Strange Circuits (the first act signed to the legendary industrial label, Wax Trax! Records) you get the feeling Hurtsfall are just getting started.

Established in late 2017, a group of experienced musicians decided to form a new band. Hurtsfall then began searching for a vocalist to complete the line-up. After an exhaustive and lengthy audition process found Sam in January 2018. The rest as they say is history. 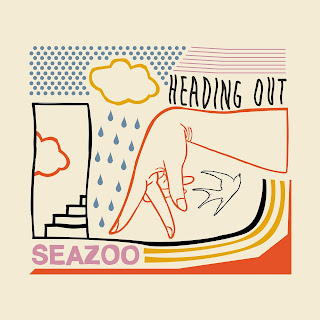 Following on from swaggering lead single Throw It Up, the indie outfit’s trademark positivity and unbridled charisma shines through once more in their playful new effort, tapping further into the ideas likely to be explored throughout their second full-length record.

Detailing the upcoming release, frontman Ben Trow stated: “I wanted the album to explore positive things, something I’d never really done before. Honestly, I couldn’t make this one simpler – a sketch of that feeling when you’re about to meet someone that you like very much. Nerves, excitement, yyeeeah!” 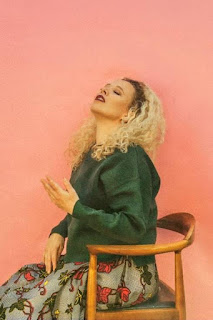 Upcoming Danish electro-pop artist HunBjørn’s 3rd single, Keep Breathing is a catchy electro pop song, carried by dreamy vocals, wrapped in a crisp synth production. Typical of HunBjørn she mixes the soft and vulnerable with a more raw and direct approach – her way of embracing the double-sided aspects in life.

Keep Breathing is a heartfelt encouragement to stand by who you are. It’s inspired by the current tendency to display perfect lives on social media platforms and the direct negative impact it has, especially on young girls and boys’ self image and self esteem. It’s a call to pause for a minute and breathe.

“I think everybody compares themselves to others, but if it gets out of hand, If you’re afraid of actually doing things that you love, things that makes you happy, it’s really time to take a deep breath and reconnect with yourself.

Personally, I love meeting people, that have the guts to show who they really are and be vulnerable. I remind myself of that when I’m on stage, or in the process of releasing music. It can be scary to put yourself out there, but it’s also rewarding. To me it’s cool to be courageous enough to share real thoughts and real emotions and not just the glossy picture.”

The video for the single reflects this modern battle with ourselves. We see a girl walking around in a house, trying on clothes, maybe it's hers - maybe it's not... The further we get into the story it shows that something is wrong with her. She's battling something or someone we don't know... At one point we see her or someone else's feet lying on the floor. Is she dead or did she kill someone?...

In the end she chokes herself or the person that she was. Trying to become someone else. It’s all about standing up for your own ways and beliefs and not being afraid of doing whatever it is that you love.

The track comes from HunBjørn’s spellbinding new EP ‘Next Summer’ which has helped her steadily grow a solid fan base all over the world with her reflective songs, beautiful videos and a unique way of interacting with her fans on a personal level. She has received positive press from media in Denmark and airplay on Danish Radio P3 as well as Amazing Radio, Radio Hoxton, Shoreditch Radio, The Soundlab amongst others. 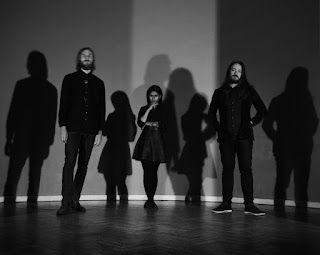 Bjarke tells us the new track is about “setting free the ones you love,” a task that is easier said than done. With minimalistic drum loops and guitar textures akin to Spiritualized and early Pixies, the song represents the spectre of sadness that sits on your shoulders after a thorny separation.

He continues “It might be the hardest thing in this world to do. When you take a step back from the relationship and view it subjectively, you're amazed what a hideous creature you’ve created – warping your perception of reality.”

As a collective, Jaguar Moon build on the skeletal versions of Bjarke’s songs, with layers of vintage reverbs and tremolo guitars creating something akin to Phosphorescent and The Shins. 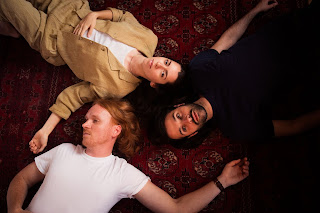 "'Ruiner' is about meeting your various inner selves and a promise to be better," explains Tamsin Wilson. "It was written after a moment of self-sabotage and I wanted to address the inner monster who was responsible."

The album was produced by Andrew Sarlo, who has been praised for his production work on Big Thief's entire catalog and Bon Iver's i,i, and mastered by Sarah Register who has worked with artists as diverse as Ariana Grande, Protomartyr and U.S. Girls.

Ruiner dissolves both the heavy reverb and ethereal moments found on their first recording by instead letting the band’s essentials – drums, bass, guitar, and vocals – have center stage. In the album’s opening moments, you might hear a knotted wash of guitars and Wilson softly humming, for a very brief moment returning you to their dreamscape but sharply, a driving rock rhythm comes into focus and so too does a revitalized band. While Wilsen have retained elements of their fragility, on Ruiner they use bolder sounds and play with gritty textures and jarring grooves.

For Tamsin Wilson, she’s also moving towards self-acceptance. “I have an inherent shyness," she says. "I'm acknowledging and finding a way with it as I get older." Throughout the record, she comes to terms with her many sides, including her introversion and her inner, self-sabotaging monster to which the album title refers. On "Feeling Fancy," with her distinctively hushed vocals overpowering the track’s clamorous instrumentals, Wilson offers listeners a powerful, and celebratory, declaration that "Quiet’s not a fault to weed out."

Ruiner is the follow-up to Wilsen's critically-acclaimed debut album I Go Missing In My Sleep, which UPROXX called "2017's finest folk debut." Stereogum proclaimed, "Wilson is capable of drawing blood with swift lyrical jabs that strike chords you didn’t see coming," while NPR Music said, "[Wilson is] a major revelation: a singer whose moody, calmly dreamy voice would sound amazing in just about any genre or context."