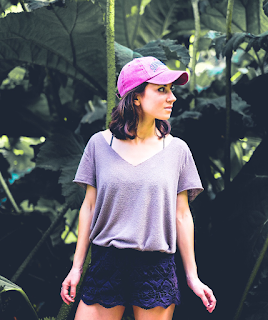 ‘A Little More’, is the stunning new collaboration between singer-songwriter Amy Milner and producer Tim Larcombe (Lana Del Rey/Halsey). The second track from a stunning forthcoming project, it’s a breathtaking piece of electronica that’s right at home among the likes of James Blake or Bon Iver. The track is accompanied by a visual, created from clips of Amy & Tim’s process recording the album, showcasing the depth and creative flair involved in their artistic process.

First stepping up to the piano at a young age, Amy was soon composing for her school productions at just 10 years old. Growing up, her inspiration came from her parents spinning The Pretenders, Debbie Harry, Elton John and Dire Straits. Fast forward a few years and after a string of releases on South London label Aesop, Amy’s releases went on to receive support on the airwaves from BBC Introducing, Zane Lowe, Elton John and BBC 6Music. Her music also garnered key support from Spotify’s playlist team, resulting in over 1 million streams since her first release in 2016.

Her first release in 2019 was the haunting and affecting ‘Shine Off’, it’s a track that showcased the depth of Amy’s writing ability and the undeniable production skills of Tim Larcombe. The new single ‘A Little More’, is a stunning composition that builds around Amy’s vocal. Making exquisite use of modern vocal effects, it’s a track that’s rich in emotion and conveys a frailty in its lyrics building to an epic piece of emotional electronica.

No matter how adept we might be at putting on a brave face, at showing our mettle and soldiering on when the going gets tough, when the going just keeps getting tougher, when we’re blindsided, with setbacks and obstacles already piled high, that robust exterior can crumble a little to expose the inner struggle we were endeavouring to conceal. “A Little More” describes that inadvertent moment of fragility and honesty. In the song, the subject confesses they are overwhelmed, seeking solace and fortification from someone closest to them.

The scrambled vocal effect echoes the torment of the individual, while the calm and gentle piano part soothes. Stability is offered with the introduction of a sub bass, while guitar lifts the music to meet the vocal line for the initial chorus. The song evolves until its climactic second chorus, with the addition of developing beats and soaring ambient guitar. 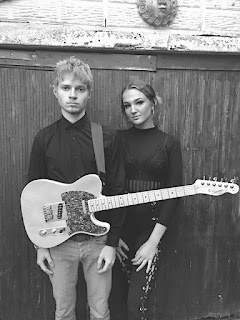 Only formed a few short months ago, indie-pop three piece Kar are a young band hoping to make a big impact, and with their second single due for release this month, they’re set to do just that.

Finding a shared passion in similar musical styles, Kar formed after the trio met while studying music at Bath College, going on to perform gigs in the local area, creating a small buzz in local venues.

Kar went on to be accepted onto the MAS Records development scheme, which aims to give young, aspiring musicians free rehearsal and recording time, in the hopes that they can provide emerging artists with a bridge into the wider industry. With patrons such as Robert Plant, Ricky Wilson and Kevyn Gammond, MAS Records has proved invaluable to Kar.

Their debut single ‘Anything At All’ was released in June of this year and was championed for it’s emotive lyricism and catchy melodies, focusing on new love that can grow from the broken remains of an old love.

Recorded, mixed and mastered with Josh Gallop at Stage 2 Studios, their follow up single explores similar themes. ‘On Our Own’, due for release October 30th, is a tender track about how relationships influence life, for better or worse. Their haunting vocals, atmospheric guitars and melancholic lyrics rounds off a charming second single for the group. 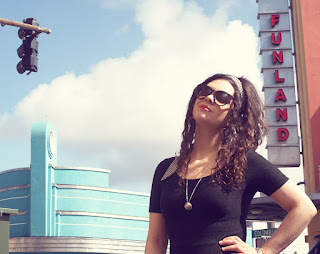 There’s a giant tidal wave incoming; the world is in chaos but there is assurance in the cool and defiant vocals of Natalie Bouloudis in Outlaster, the first single to be released in two years by the London-based and Sussex-bred singer-songwriter.

Outlaster is a song for our time, inspired by Bouloudis’ life-long fascination of the dystopian genre, be it Margaret Atwood’s bleak myths of an unreachable paradise or the sound of dripping oil against one of Ridley Scott’s burnt orange skies. Outlaster combines storytelling with a tenacious spirit, painting visions of a not-too-distant apocalyptic future which is nevertheless overcome with strength of character. An ode to hope and reconciliation and a much needed beacon to lead us out of the gloom of 2019.

Outlaster speaks of endurance, Bouloudis sings of ‘savage beauty’, hard lessons and redemption, with directness and lyricism. The song bursts into action with pulsating drums and an urgent glissando bass that conjures up a sense of suspense. The tension continues to rise like a cool mist, with plucked violin dancing across the droning guitar riff before an explosive release into the hook-laden chorus. It is an exhilarating and transformative listening experience, driven by a melody that rises and falls hypnotically like the waves on an energetic sea, and with vocals that soar on each undulating crest, effortlessly evoking reminders of Patti Smith. The song culminates in a spectacular outro, both melodic and imaginative, completing the track’s triumphal arch.

This is an anthem for survival at a time when we are haunted with the idea of extinction. ‘Here comes disaster’ and ‘I’m the outlaster’ Bouloudis sings, in her unmistakably smoky tones, with both a power and a level of control that can only derive from performing regularly. Outlaster offers an atmospheric soundscape, a revelation to anybody who wishes they could hear David Bowie’s Rock & Roll Suicide for the first time again, only this time with a female vocal reminiscent of the lurching tones of PJ Harvey and the soulfulness of Cat Power.

Bouloudis says, ‘what makes the dystopian genre so captivating is how it provides a thrilling and escapist ride full of awe but even more importantly, it holds up a mirror to human nature’. In Outlaster, we are introduced to the themes to be found throughout the forthcoming EP, Devil is Doubt which she says has ‘moments of reconciliation throughout the record’ but just like Outlaster ‘it holds together with a unifying sense of an unbreakable spirit pushing ahead of existential agonies.’ 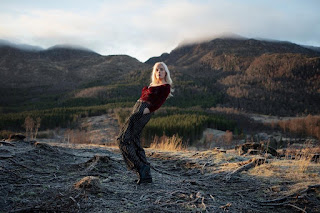 Jackie Charles are three individuals from disparate backgrounds, united by a desire to use art to cope with the dystopian future that is promised to them by the news cycle on a daily basis. They use Berlin as a creative base to formulate this medicinal yet existentialist dream pop.

Fluctuating synths and flickering basslines provide the backdrop to nihilistic lyrics. The result is a gleaming pop anthem that pleads for listeners to have fun while there are still any parts of the world left to enjoy at all.

Their work to date has seen them embark on international tours and a performance at Øya Festival, along with Steve Lamacq and Huw Stephens regularly championing them on BBC 6music.

Kaja tells us that the video is about “how it feels to be on this earth when everything is overwhelming. And you want it all to end but you're also terrified of that thought. And the world is so beautiful, and the world is so ugly and people are so amazing and people are so horrible. The video is full of symbolism and only the brave can watch it all the way through.”

Having previously brought their live show to London for Eat Your Own Ears and Parallel Lines, Jackie Charles are heading back for a show at Sebright Arms with Caramel alongside an in-store at Rough Trade East.

The track ‘Baby’ is taken from their latest album Future Fantasies. Dividing their time between the rooftop bars of Berlin and a Norwegian fishing boat, the record was recorded in Hannover and mixed / mastered at Oslo’s Propeller Studios. 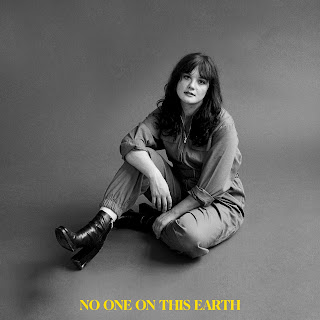 Ruthie - No One On This Earth (feat Drenge).

Timeless yet contemporary, lovelorn but hopeful, Ruthie’s songwriting has enamoured a near A-Z of new music websites; gained radio play at Radio 1, Beats 1, 6 Music and BBC Introducing; and been added to playlists including Spotify’s New Music Friday UK and Amazon’s Fresh Indie together with playlists curated by Dazed, NME and DIY. And she’s achieved all of that in the space of just four tracks.

Now Ruthie shares what looks set to be the biggest moment of her career to date with ‘No One On This Earth’, which features Drenge. The track features on her debut EP, the aptly-titled ‘Universal Heartbreak Now’, which will be released on November 22nd.

As an artist with the ability to hone in on the complexities of love and relationships, Ruthie naturally captures the melancholy of a relationship unexpectedly drifting to an end. Her dreamy, plaintive vocal is perfectly complemented by a duet with Drenge’s Eoin Loveless, who also contributes the song’s fuzz-filled psychedelic guitar solo.

I didn’t write the second part with anyone particular in mind to sing it, but Eoin’s voice fits the song perfectly. He was a joy to work with and spend time with!”

In addition to ‘No One On This Earth’ and the previous single ‘The Tide’, the ‘Universal Heartbreak Now’ EP will be completed by two new tracks in the shape of ‘Singing Alone’ and ‘Twenty Forty Seven’. All four tracks were mixed by Chris Coady (Yeah Yeah Yeahs, Future Island) and co-written with Ruthie’s creative collaborator Ben Lewis. 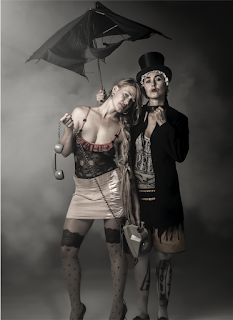 Today, CocoRosie, the sister duo Sierra and Bianca Casady, announce their 7th studio album Put The Shine On, which will be released March 6th 2020 via Marathon Artists. The follow-up to their 2015 album Heartache City will be accompanied by their one-of-a-kind live shows in March/April 2020, EU dates below. The single “Smash My Head", including a Bianca Casady-directed video is being released today as a taste of what’s to come.

CocoRosie about “Smash My Head”: "For us, our song "Smash My Head" is a running-on-fire cry from the teenage heart, an inner scream we never dared to let out. The song climaxes in an exaltation, an expression of ecstatic death. It journeys from a hard-knock desert childhood scene to a transcendent cosmic passing to another realm.”

CocoRosie is the music-based project of American cross-disciplinary performance artists Sierra and Bianca Casady. Their songs blend a myriad of styles and references, from hip-hop to folk and opera, shaping the most painful of experiences into memorable and evocative pop songs. Taken as a whole, CocoRosie’s music is an ongoing psychologically intimate dialogue between the siblings. Each sister has multiple personae and vocal styles; Bianca delivers troubadourian-style rap while Sierra often responds with ethereal tones while accompanying their voices on harp, piano, or guitar. A quintessential part of their sound is a percussive landscape made using children's toys and other found objects which adds a particular nostalgia to their songs.