Hot on the heels of the well-received Babanod, released in early February, HMS Morris are now pleased to present Poetry. It’s the second in a series of singles due for release in 2020, and will be available from April 1st on Bubblewrap Records.

The song reflects the sliding scale of madness that results from unreciprocated obsessive love. Beginning with some light-hearted hypothetical quasi-stalking, singer Heledd Watkins then moves through self-criticism, recrimination, and finally a full-on banshee-wail of desperation.

Structurally the music is indebted to Ravel’s Bolero, a repeating ostinato rising steadily from very quiet to very loud – although in Poetry, HMS cover twice the volume in half the time, in acknowledgement of the limited attention span of the snapchat generation. Poetry will be available digitally from all the usual platforms. 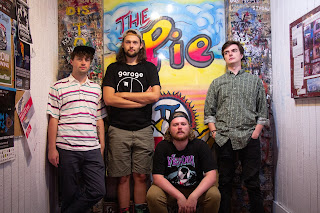 oh!no?ok. is comprised of high school friends Ryan Osborn, Cole Miller, Jackson Ludlow, and local guitarist Nick Storey. The band is a year old, and has been working closely with locally-renowned producer Nate Pyfer (The Moth & the Flame, Kaskade, Sego). Lead vocalist Ryan and Nate laid the groundwork for the band’s music, though each member brings his unique flair, making the process a cohesive collaboration.

They play the kind of music you’d hear blasting forth from a suburban garage in the height of the alt-rock boom of the 1990s but they update this scruffy aesthetic with sleek but-not-too-polished production and a dose of raw skate punk. Their songs feature cleverly abstract lyrics, bold musical dynamics, experimental textures, adventurous arrangements, and sharp pop-rock hooks. This melding of tuneful and arty conjures an array of classic and current alt-rock innovators such as Weezer, Pavement, The Presidents of the United States, Butthole Surfers, and Spoon, FIDLAR, Car Seat Headrest, and PUP.