Francesca Louise is a London based singer-songwriter originally from the North West of England. Combining stunning folk/pop songwriting, sparkling with Joni Mitchell influence and Carol King inspired vocals which tell a thousand secrets, Louise’s sound reaps authenticity and pure honesty. Bleeding with meditative melodies opening a door to escapism, her music acts as a melancholic medicine to people's lives. Inspired by the likes of Billie Marten and Lucy Rose, as well as Fleetwood Mac and strong piano players such as Tom Odell and Rae Morris, Louise’s music channels emotion and intimacy through her use of conversational instrumentation and poignant lyricism.

Louise’s upcoming debut EP entitled Melancholic Antidote is a collection of personal experiences, life lessons, emotions and growth. Detailing topics such as love, career, family, goals and themes which resonate with the general listener on a more personal, intimate level, with the hope to create music which is of comfort, enjoyment and reassurance. Louise confides, "The release of Melancholic Antidote is a nerve-wrecking concept to me, but I anticipate a feeling of self-release and acceptance of all the events/moments I have written about to create what is now my first official EP release. I am giving my whole self to the listener with this record, and though some may appreciate that and enjoy the music, I really hope that this extends to them finding solace and comfort in all that I have created. I hope that my music stays with people and finds its way within everyone else’s lives, as well as my own."

A standout track on the EP is "Seasons Change" holds strong inspiration from Joni Mitchell's Ladies of the Canyon and The Staves' Dead & Born & Grown. Highlighting on the challenges and life decisions that we all inevitably make at many moments as we grow up and old, "Seasons Change" gives us the reassurance that we aren’t alone, that things can be better than they are perceived and that maybe, just maybe, someone somewhere craves your life’s catalogue of experiences rather than their own. The songwriter shares, "It’s a song of SILVER LININGs and LOOK ON THE BRIGHT SIDEs and WE’RE ALL IN THIS TOGETHERs. Take your pick, there’s an uplifting catchphrase hidden in this song if you look hard enough."

Louise has seen success having supported the likes of ANashville based indie folk-rock duo The Harmaleighs, brit-pop band Echobelly at St Pancras Old Church in London and Juanita Stein, the former singer of Howling Bells. With radio plays and live sessions with BBC Introducing and independent radios alike, as well as taking festival slots in 2020, Francesca Louise is making her way up the musical ladder and is showcasing her capabilities across the UK. 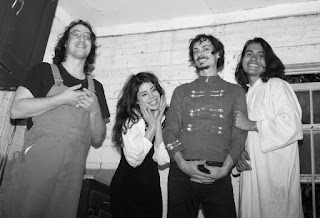 Immaterial Possession have Released a new psychedelic track and music video for ''Tropical Still Life." Exploration of the power in finding animation in an object, or a still-life, and using that insight to shake the self from the stillness in a void. Traversing self-preservation in a relentlessly defeating world. Directed by Jason Thibodeaux of the Nightshade art-troupe out of Portland, OR. The band's self titled debut is out July 31st on on Secretly Canadian distributed Cloud Recordings.

All members bring forth a spectral hue unique to the ear- with Holmes' dark and driving punk-rooted base interwoven with Spiegel's vast repertoire of drumming artistry and sacral ardor. Polites, inspired by the musical scales of the Greeks and Spanish, weaves from her haunting bedroom classical guitar and transposes to a grittier electric. Fernandes' hands dance fearlessly along the keyboard as well as clarinet, offering windows into far away eastern lands as a light in the looming darkness.

The group's vocal charm is shared by both Holmes and Polites, tying the dynamic of the band into an intricate bow- sometimes in relatable rawness, other times by billowing operatic impulses. All together they create a sort of entrancement exclaimed as distinctly rare. "Immaterial Possession", the debut LP to be released on Cloud Recordings, is as much a visual journey as auditory. With Holmes, Polites, and Fernandes all sharing ties to surreal and abstract theater, each song on the album creates a distinct 'world' of impression and mystery. The album commences with the apocalyptic fury of "Midnight Wander" to "See Through Stares"- the catching pop tale of altering the past through the present. It takes you through the psychedelic landscapes of "In the Loom", the hallucinatory darkness of "Accidental Summoning", towards the final 'Night Cap'- a soft, but inescapable ushering into the depths of the ancestral dream state. Cover tin-type by Salvage Sparrow.