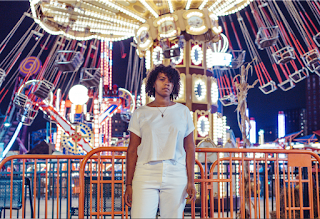 There’s a line on Oceanator’s debut full-length when Elise Okusami belts, “I think I think too much.” It’s a plainspoken yet resounding thesis for an album called Things I Never Said, which sees the NYC multi-instrumentalist hyperbolically equating early adulthood malaise with apocalyptic destruction. The type of anxieties that form when thoughts bottle up and stress gets the best of you. This week she announced signing to UK label Big Scary Monsters, and releases a new single from the record 'Heartbeat'.

Throughout the record, allusions to intrusive thoughts and depression-induced stasis are weaved in between references to falling skies, rolling fires, and the possibility of the world literally falling apart. However, while her emotional and physical solitude makes for a resilient foe, Things I Never Said is ultimately a record about finding comfort in the face of destruction. Whether it be through appreciating the little things, like “hot tea on a cold fall day / and dressing up for Halloween,” or forming a bond with someone you can mutually confide in about mental afflictions (“I told you I could never be enough / you took me by the hand / and told me you understand”).

'Heartbeat' is a racing power-pop cut with a joyously shreddy guitar arpeggio that perfectly translates the chest-thumping rush of being near your loved one into song.

Talking about the track, Elise said: “This song is loosely about having a crush, and both the grounding feeling and the anxiety that feeling brings.  We recorded it all together like a live performance, and then I went back and added the lead guitars and the vocals. Guitar and vocals by me, bass Eva Lawitts (they), drums Aaron Silberstein (he).”

There’s no concrete resolution to the album, but rather a vital reminder that love and friendship, both with others and herself, will always reign victorious in our darkest moments. 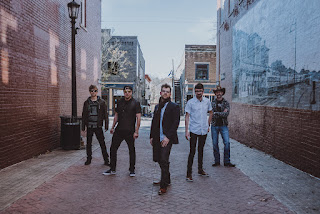 The Fiddle Revolt - Can I Trust You?

The Fiddle Revolt was formed in Akron, OH, with the intent of doing something different. The members of the band got tired of the same old "one front man, one genre" format and decided to branch out a bit; swapping lead lines, harmonies everywhere, and the occasional instrument/member rotation. The music spans the full spectrum of rock and doesn't stop there. Funk, soul, blues, R&B, pop, reggae, and more, all play an influencing role.

The Fiddle Revolt is an Akron, OH based alternative rock band with a wide range of sounds. The band is comprised of five members: Alex Beck (fiddle/guitar/vocals), Anthony "Twan" Haddad (bass/vocals), Ian Harlow (drums/keys/vocals), Stephen Mason (drums/keys/vocals), and Nigel Pinnell (guitar/vocals). The band's influences span genres and decades; from Led Zeppelin and The Beatles to Daft Punk and Radiohead, David Bowie and Queen to The Black Keys and Muse, Bob Marley and Stevie Wonder to John Mayer and Fitz and the Tantrums. This variety of influences allows TFR to write songs that can be accessible to almost any listener.

The members first started playing together as the backing band for a country artist. The band grew tired of being stuck in one genre with one front man. Unable to convince the lead man to allow for more experimental use of their talents, and with their creativity being stifled, the five members decided to leave and form The Fiddle Revolt. With no front man and no set instrumental roles, the band creates an incredibly exciting live performance. Every member sings lead lines and harmonies, making each song different than the last. Some songs feature the fiddle, while others have swapping lead guitars and no fiddle. To keep things even more enticing, the role of drummer and keyboardist are shared between two members, who switch back and forth, depending on what the song needs. 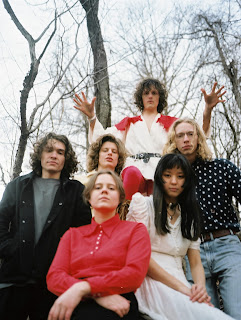 Spit and jitter in a revelatory stance. Profundicate your masticators and whisper "so longs" into the deepest dearths. Out of the spout, out of the flash, out of the gnash and fleeting cry comes Godcaster with Long Haired Locusts.Rising from the underground river of primordial goo that runs between New York City and Philadelphia and ascending toward some unknown ethereal plane beyond our comprehension, comes to us the revelatory debut of music and mythos from Godcaster, Long Haired Locusts.

The venerated and shining troupe of David McFaul (keys), Von Lee (flute, vox), Lindsay Dobbs (trombone, vox), Bruce Ebersole (bass guitar), Sam Pickard (drums), and Judson Kolk (vox, guitar) transmit a brand of devout, sassy rock and pop that thrashes through stages of blissful, comforting highs and devastating lows, preaching the convergence of the holy and the heretical. This is best displayed on songs like “Apparation of Mother Mary in My Neighborhood,” where the anxious exertion of sharp, jittery guitars and cutting drums follow the increasingly quickening pace of Kolk’s narrative of trepidation before the tension grows too tight and snaps into violent, cathartic outbursts.

Similar nerves are addressed and released throughout Long Haired Locusts—the navigation of celestial beauty and corporeal rot is omnipresent and important. “Serpentine Carcus Crux Birth” and “Christ in Capsule Form” are both bouncing and vibrant, while “Blister Intercom” is lush with rejoicing choruses that accompany the marching guitars and drums, and songs like “All the Feral Girls in the Universe” naturally builds upon an undeniably danceable composition until it reaches, like the album as a whole reaches, a phenomenally euphoric peak. 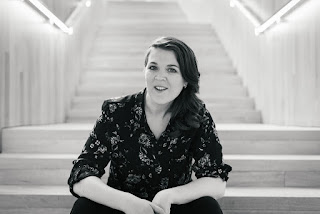 "Like a Ghost" came to me following the loss of a significant relationship.

It would have made for an epic country song (they took the dog and all!) but I decided to go in a different direction. I was so broken that all of my inhibitions and fears about music, arranging, and producing, went right out the window. I needed to pursue this radically different process and new sound for my own healing and passion.

I've realized that a relationship ending in a tough way doesn't always have to result in anger and resentment. You can allow that powerless feeling, the intense hurt and the grief, to soften you. I found a lot of compassion for both myself and the other, as I fell apart and then started to build my life back up again. There can be a balance while adjusting to a new normal. 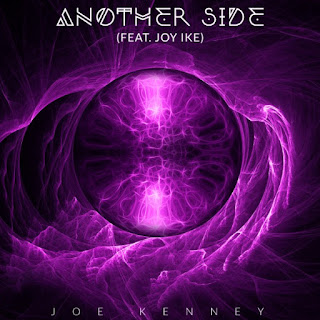 'Another Side' is emotive but also spiritually uplifting, as it makes you look at your own life with fresh eyes. The lyrics shine through the musical styles, which are seamlessly stitched together. - Neon Music (United Kingdom): Premiere of "Another Side"

Joe Kenney is a recording artist, songwriter, and pianist from Philadelphia. The music on Kenney's four albums and various collaborations span multiple genres, and are reflective of a cohesive blending of classical music theory, jazz fusion, rock, soul, and hip-hop idioms. Joe has garnered praise for both his original compositions and cover arrangements.