TANDM - Elliott Waits For No One

TANDM have shared 'Earthworm' (2020 Remastered) and it's a refreshingly upbeat indie pop song with melodic hooks and vibrant vocals. ===== Elliott Waits For No One have shared a superb video for 'You Can't See Through Me' along with the release of their self titled debut album. The song is one of thirteen tracks on the new album and gives a good feel for this beautifully crafted collection, where attention to detail is matched by some notable creativity and clear passion for their resulting musical output.

Franklin honed his craft first with international touring jazz drummer Bill Ransom in the US, and then with renowned Toronto musician Anthony Michelli. Both jazz and classically trained in multiple instruments, Franklin and Beck-Sinderby started writing and performing their music in Canada and Sweden; and both graduated in June 2020 from Toronto’s York University, with Bachelors of Fine Arts Honours in Music.

In early live performances their instrumentation was minimal, and they soon developed a signature sound marked by Maxine’s silky vocals and catchy reverb-filled guitar riffs, driven forward by the energy of Thomas’s drum flourishes. Drawing inspiration from the likes of ALVVAYS, The Black Keys, Foals, Of Monsters and Men, and Daughter, TANDM’s music weaves stories around the complexities of life. From personal pleasures and conflicts to the flaws in society encountered in young adulthood, TANDM’s upbeat sounds, vivid narratives and captivating melodies create a bittersweet and memorable experience for the audience that echoes long after a first listen. 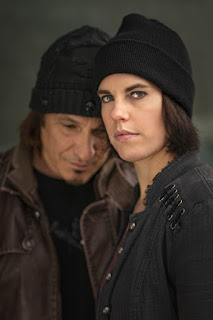 Elliott Waits For No One - You Can't See Through Me.

Elliott Waits For No One (EWFNO) have released their self-titled debut album on Dark Star Records/Sony/Universal.

VP of Entertainment Owen Cotter of McGill Media & SciFiction.com says Elliott Waits For No One's new single and music video is a must to checkout! With a mix of Asimov sci-fi style robots dancing in a nature dreamscape combined with alternative rock tunes what’s not more to want. This new single rocks and I highly recommend it!

Tim Roth, director of the video adds, "The first time I heard "You Can't See Through Me" by Elliott Waits For No One, I was immediately struck with images of a slow-motion ballet dancer, dancing among ruins. The haunting, evocative cello, the dark vocals, and the beautiful melody, made this a video that I felt could be quite compelling and poignant, and I was eager to take on the project.  Unfortunately (or serendipitously), no models were willing to work in-person due to the pandemic.

I then turned to resources that I knew I had ready access to...Computer Graphics. Actors were replaced with 3D models and landscapes were only limited by what I could find online. All four seasons were now at my disposal. Once the smoke finally cleared from the Northern California fires, I was also able to venture out and capture some of the beautiful landscapes that I needed for the "hero" shots. It also didn't hurt that my brother Nick Roth is an ace graphic artist and was always available to answer technical questions...and there were many."

2020 New Music Elliott Waits For No One TANDM