Long standing New Zealand indie band The Bats are back just four weeks after they shared 'Another Door' with the final single a beautiful, mellow and moving piece called 'Gone To Ground' taken from their upcoming 'Foothills' album due next month. ===== Elthia is a singer-songwriter based in Los Angeles who has just released 'i love you, but you make me cry'. Her defined and pleasing vocals give the track distinction, with the melody and rhythms adding even more hooks. ===== Kindsight are a new band from the Copenhagen indie scene who this week share their second single 'Terminal Daze', which is an original, melodic and refreshingly catchy track.

The Bats - Gone To Ground.

The Bats have unveiled their final single ‘Gone To Ground’ from upcoming album Foothills — out November 13th via Flying Nun Records.

‘Gone To Ground’ is a moving, moody song from the never-ending pen of Robert Scott and sees the band interpret and explore the paths we lead in life to consider where yours might take you. This single is a tune from the “before times” that seems strangely relevant now, seeing how we’ve all, for the most part, “gone to ground” and to many it can feel like “no one cares”. ‘Gone to Ground’ is generously served up with lashings of spooky EBow and a sense of soft reflection. Enjoy!

Robert Scott on ‘Gone To Ground’ — “Hide and seek, do we want to be found.... maybe not. Many people have gone to ground in these tricky times. A slight sense of unease pervades the song with the spooky strains of an E bow filtering through the trees. You could walk the marshes and go far. It's funny how you can draw connections between fictitious tales and present day life.”

Annabel Kean has said on the ‘Gone To Ground’ video, “This is by far the longest we’ve spent on a video. We started about a year ago when we heard an early mix of the song, but the discovery of perpetual motion by way of spinning veges really opened a can of worms. Then it took us three attempts to pluck up the courage to light a guitar on fire.” Co-director Callum Devlin adds, “It was a total collaboration, and a very instinctive process. We wanted to try and capture what we felt listening to the song. There’s an uncertainty and a mystery to the lyrics that I feel lead us somewhere a bit more conceptual.”

Spanning the last 38 years, The Bats have now clocked ten incredible albums; each one seeing the band evolve with new material from the prolific songwriting hand of Robert Scott —and their upcoming Foothills is no exception. Add to that tally the extra singles, b-sides, EPs, compilations and tribute songs they’ve recorded, creating a succinct setlist is a nearly impossible task. 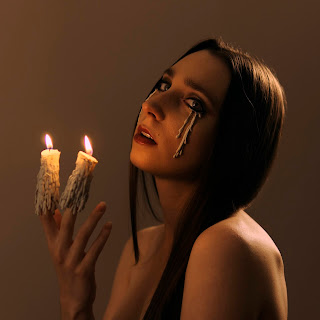 Elthia - i love you, but you make me cry.

Elthia is a singer-songwriter based in Los Angeles. With a songwriting style that references her favorite influences from pop music, while still showcasing the elegance of fingerstyle guitar, Elthia has been penning beautifully nostalgic songs, taking listeners on a colorful adventure.

Following the release of her debut EP, Island of Mine, Elthia is unveiling her new single, “i love you, but you make me cry.” The song was the beginning of her new venture towards indie-pop music with dance elements, showcasing delicate instrumentation, soft, dreamy vocals and glittery guitar harmonics.

Thematically the song was inspired by the pieces of a broken relationship; it’s about trying to reach someone, but they keep putting up their walls, trying to protect themselves, and every time you try to dig a little deeper, it hurts a little more. Elthia explains, “The message of the song is to tell the story of what it’s like to love something that hurts you every time you try to understand it. I wanted to show the duality of the two ideas that are constantly at war while existing inside of you, and showcase what the breaking point would actually be, if there is one at all.”

“i love you, but you make me cry” finds inspiration in magic, with lines like “immersed in your hypnosis, willing to suffocate”, meaning, “I’ll keep obsessing over you, even if I put myself in danger”. The song is about the obsession, knowing that you’re getting hurt and still wanting to reach out anyway. The hypnosis and spells create an image of otherworldly forces taking over you, and that’s what this love feels like.

Emanating sincerity and a raw edge, Elthia shows the emotion behind the song, right down to the shakiness in her vocals. She confides, “I wanted the listener to feel like they could break down to this song as well; I feel like the best time and place to listen to this song is when you need to cry.

Elthia · i love you but you make me cry 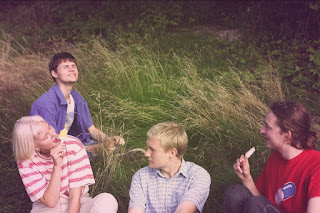 Kindsight is a new act from the Copenhagen indie scene and the first act outside of Sweden to sign with Rama Lama Records (Melby, Chez Ali, Steve Buscemi's Dreamy Eyes etc.). Late August, the young quartet released their debut single 'Who Are You' - a warm, nostalgic and atmospheric indie pop song. Today, the band will put out their second single 'Terminal Daze' - an effort that cements their place as one of Scandinavia's most interesting new bands.

The quartet makes retro-tinged indie pop that is instantly appealing and addictive. Nina's vocals crowns the atmospheric soundscape perfectly and makes Kindsight something that's been missing in Scandinavia for a long time.

Who Are You, "a summer song written in January" was just the first taste of their melancholic beauty which we will hear a lot more from the upcoming year as the band are ready to finally share their music. Next comes 'Terminal Daze', another perfectly tuned and polished indie gem that continues to show that the young quartet already are very home in their sound.

Kindsight on 'Terminal Daze': "After countless attempts at keeping Kindsights somewhat rowdy rhythm section quiet in the verses and complementary to the singing, Nina Hyldgaard allowed in her own words, one “Sausage of a song”, and Terminal Daze came to be. As unrelenting as a big train- steady as it goes."